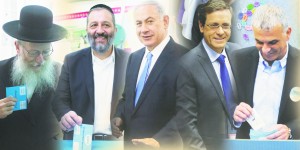 Israel’s election has once again yielded a fractured parliament, setting up a horse-trading phase that seems likely to leave Prime Minister Binyamin Netanyahu in place, though a joint government with Isaac Herzog was still possible. Far less likely was that Herzog, through machinations, still ends up on top.

Herzog said he would make “every effort” to form a government, and an upstart centrist party led by a former Netanyahu ally-turned-rival was set to be the kingmaker. The country now heads into weeks of negotiations over the makeup of the next coalition.

Both Netanyahu and Herzog will now compete for a chance to form a coalition that commands a majority in the 120-seat parliament, a daunting task in Israel’s fractured political landscape. Netanyahu appeared to have a better chance of cobbling together a government with right-wing and religious parties. Herzog would have to appeal to more ideologically diverse parties.

The election was widely seen as a referendum on Netanyahu, who has governed the country for the past six years, and recent opinion polls had given Herzog a slight lead.

As the results were announced on the nation’s three major media stations, celebrations erupted at Likud’s campaign headquarters in Tel Aviv.

In a statement, Netanyahu said that “against all odds” Likud had won a “great victory.”

Netanyahu focused his campaign on security issues, while his opponents portrayed him as out of touch and instead focused on the country’s high cost of living and soaring housing prices.

Early Wednesday, Herzog addressed his supporters, saying that he had already begun efforts to court potential coalition partners. In a nod to Kahlon, he said he was committed to forming a “real social reconciliation government.”

Under Israel’s fragmented electoral system, either Netanyahu or Herzog will have to court potential partners to secure a 61-seat majority in the 120-seat parliament.

Herzog could potentially try to build a coalition that would rely on support from a new Arab alliance that captured 12 to 13 seats. But Arab parties have never sat in an Israeli coalition before, complicating any potential deal.

This article appeared in print on page 1 of the March 18th, 2015 edition of Hamodia.