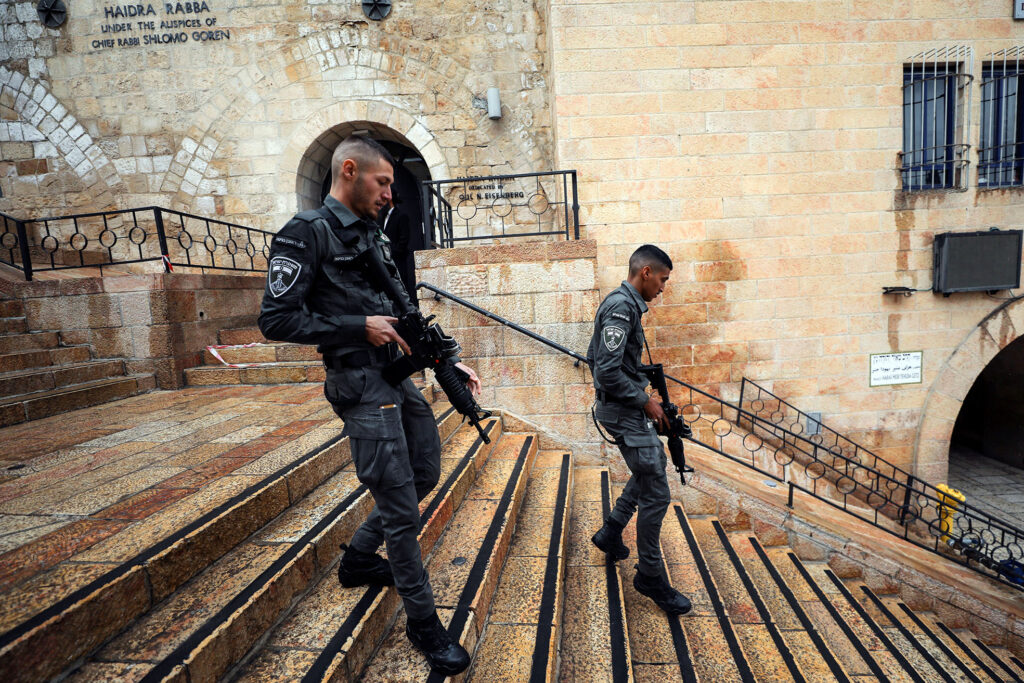 Israel currently has more than 80% of the bodies of terrorists killed in the past year in its possession, the Defense Ministry said over the weekend, following an Israel Hayom inquiry on the matter.

It was the first time the Defense Ministry has addressed the matter of its policies regarding the bodies of terrorists.

The figure released by the ministry comes on the heels of a spate of terrorist attacks, and after the defense establishment’s recent decision to return the bodies of three terrorists to their families, despite the diplomatic-security cabinet’s stated policy of holding the bodies of terrorists as a deterrent and future bargaining chip in prisoner exchange deals.

On Nov. 19, under directives from the political echelon, the IDF returned the body of Amjad Abu Sultan from Beit Lechem to his family. Abu Sultan was shot and killed after throwing firebombs at a vehicle with Israeli license plates near Yerushalayim.

On Dec. 20, Palestinian media outlets reported that the IDF had returned the body of the terrorist Dr. Hazem Joulani, 40, from the east Yerushalayim neighborhood of Shuafat. Joulani was killed was carrying out a stabbing attack in September in the Old City of Yerushalayim.

This week, Palestinian news outlets reported that the body of another terrorist, Omar Abu Assab, was returned to his family. About a month ago, Assab attacked two Border Police officers near the Ateret Cohanim yeshivah in the Old City.

Ministers informed Israel Hayom, however, that the diplomatic-security cabinet had not changed its policy on the matter. It should also be noted that in the past, most of the senior ministers in the current government have supported the policy of holding terrorists’ bodies, including Prime Minister Naftali Bennett and Finance Minister Avigdor Lieberman when they both served respectively as defense ministers under former Prime Minister Binyamin Netanyahu. Even Foreign Minister Yair Lapid has opposed returning terrorists’ bodies and has said he would support legislation in such a vein.

The person who initially spearheaded Israel’s current stated policy on the matter is Defense Minister Benny Gantz, who in 2020 proposed that the government resolve not to return the body of any terrorist to his or her family, regardless of the outcome of their attack or organizational affiliation.

Gantz at the time said the policy was “part of our commitment to protect the safety of Israeli citizens, and of course return our boys home,” referring to the bodies of IDF soldiers and Israeli civilians in Hamas captivity in Gaza. “I advise our enemies to understand and internalize this message very well,” he said.

Right-wing civilian groups lambasted the decision to return the terrorists’ bodies. Matan Peleg, the head of the Im Tirtzu organization, and Maor Zemach of the “Go Jerusalem” organization told Israel Hayom: “In recent years, together with the ‘Choose Life’ forum of bereaved families, we’ve waged a fight to stop the return of terrorists’ bodies. In September 2020, at long last, the cabinet decided to put an end to the practice, yet here we discover that in the past two months, the bodies of three terrorists were released.

“These decisions won’t restore quiet and won’t lead to peace. They will lead to more terror and are a prize for terrorist organizations. We call on the cabinet ministers who for years opposed returning terrorists’ bodies, to wake up and act in accordance with their own words.”

The Defense Ministry said in a statement that Gantz had not instituted any change to the policy.

“Following an examination of the numbers, in more than 80% of the cases brought before the defense minister over the past year, he decided to not to return the [terrorists’] bodies. In extraordinary cases, which correspond with the cabinet’s policy, a decision is made, in accordance with recommendations from defense and legal authorities, to return a body. Minister Gantz will continue spearheading a policy of fighting terror uncompromisingly…,” the Defense Ministry said.

A defense official told Israel Hayom that the cases exempted by Gantz were unique in that they involved either a minor or a person with a background of mental or other extenuating personal issues, in accordance with the criteria presented to the High Court.

The defense official further explained that more of these types of extenuating cases have come within the framework of the recent string of lone-wolf terrorist attacks. With that, the official stressed, in all three cases in which a body was returned the attacker did not have any affiliation with a terrorist organization.