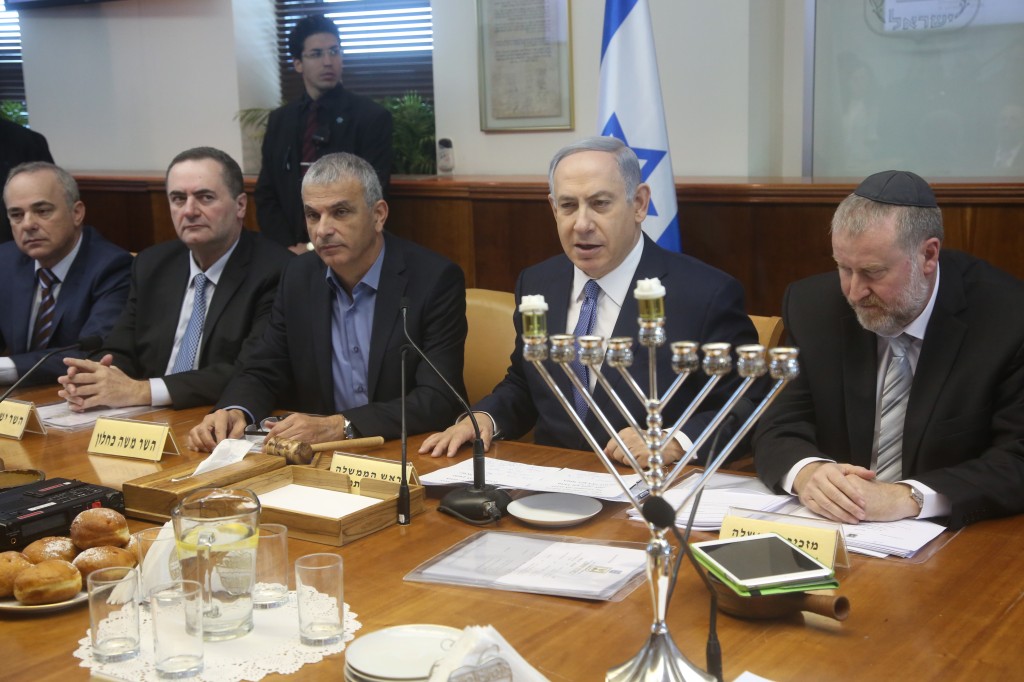 Prime Minister Binyamin Netanyahu followed up on his response to Secretary of State John Kerry’s warning that Israel and the Palestinians were heading toward a one-state solution, telling an American audience on Sunday that it will not happen.

In a video address to the Saban Forum in Washington, D.C., Netanyahu said: “The only workable solution is not a unitary state, but a demilitarized Palestinian state that recognizes the Jewish state.”

Earlier in the day, at the weekly cabinet meeting in Yerushalayim, the prime minister declared that “Israel will not be a binational state.”

“But,” he added, “in order for there to be peace, the other side needs to decide if they want peace. Unfortunately, this is not what we are seeing,” noting that “the Palestinian Authority’s incitement continues.”

Kerry told a conference at the Brookings Institution that the Palestinian leadership must do more to prevent and combat anti-Israel violence. But, he also said Israeli leaders should not advocate or allow the Palestinian Authority to disintegrate. If that were to happen, Kerry said, Israel would be forced to assume all governance in Yehudah and Shomron and potentially accept a one-state solution that would compromise Israel’s future as a democratic, Jewish state, according to an Associated Press report.

While condemning the recent surge in anti-Israel violence by Palestinians, Kerry said calls from some Israeli politicians to let Palestinian Authority President Mahmoud Abbas’ administration wither are counter-productive and self-defeating for Israel. Without a two-state solution, Kerry said, Israel would be forced into an unsustainable position of perpetual occupation that would be rejected not least by the Palestiniasn but by most, if not all, of the international community.

“The one-state solution is no solution is at all for a secure, Jewish, democratic Israel living in peace; it is simply not a viable option,” Kerry said.

He also lamented the fact that Israel continues to approve new construction in Yehudah and Shomron, while denying construction permits for Palestinian projects on territory that would be subject to negotiation in an eventual peace deal.

“The level of distrust between them has never been more profound,” Kerry said.

On Sunday, Netanyahu again rejected the claim that “settlements” are the main obstacle to peace, saying, “the root cause of the conflict with the Palestinians is their refusal to recognize the Jewish state… Settlements and territory are an issue to be resolved, but they are not the core of the conflict.”

“President [Mahmoud] Abbas refuses to [go to] his people and say – it’s over. No more claims after a peace deal,” the prime minister said. “The Palestinians have not been willing to cross the conceptual and emotional bridge of accepting a state next to Israel, not one instead of Israel. Not just Hamas, but also the PA. They refuse to accept a Jewish state for the Jewish people.”

Netanyahu also condemned the PA’s chief negotiator Saeb Erekat for making a condolence call to the family of Mazen Aribah, a PA intelligence officer who was shot by the IDF after he shot and wounded two Israelis north of Yerushalayim in a terrorist attack on Thursday.

By doing so, Erekat “gives backing and encouragement to acts of terror,” Netanyahu said, though he did not mention Erekat by name, only referring to him as chief negotiator.

Presidential candidate Hillary Clinton added to Kerry’s warning about a failed Palestinian Authority, raising the specter of an Islamic State province on Israel’s southern borders, in her speech at the Saban Forum.

“Lets be honest here: The alternative is the black flag of ISIS,” she said, noting that the terrorist organization has already been seeking to gain a foothold in Sinai.

Clinton agreed that “a one-state solution is no solution,” and again urged face-to-face negotiations.

She condemned the Boycott, Divestment and Sanctions movement against Israel, saying that it was not only counter-productive but linked to anti-Semitism.