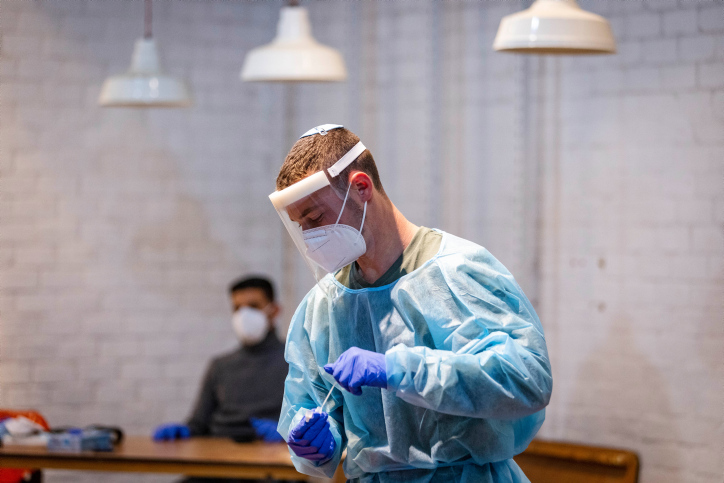 Health Ministry data released on Friday morning showed that Israel’s daily cases approached 17,000 on Thursday, setting another new record for the greatest number of new infections reported in a single day since the start of the pandemic.

Driven by the omicron variant, 16,830 cases were diagnosed on Thursday. Another 4,032 cases were identified on Friday by 8 a.m. But with official testing sites now deprioritized for much of the population, the number of unreported cases is expected to be higher.

Under the new regulations, those who are over 60 or at high risk are prioritized at PCR testing stations. Those who are under 60 and fully vaccinated are encouraged to conduct a rapid antigen test, either at home or at a testing station, and can use those results to get exemptions from quarantine.

Israelis have been swamping drugstores to purchase home antigen tests as the new rules take effect and cases skyrocket, though some health experts warn that they are far less accurate than PCR tests — particularly when it comes to detecting omicron.

Channel 13 reported that in recent days it had received internal Health Ministry figures suggesting that only 50% of those who have omicron will test positive on rapid antigen tests, with even higher false-negative rates among those who are unvaccinated. The figures could not be independently verified.

One health official told Channel 12 that the old rules requiring exposed Israelis to get a PCR test were unsustainable due to the burgeoning numbers, but warned that negative antigen tests were not accurate and would skew the figures.

The previous daily case record was set a day earlier with 16,240.

Prime Minister Naftali Bennett warned on Sunday that Israel would likely see 20,000 new daily cases by the end of the week, and could hit 50,000 daily cases at the height of the wave.