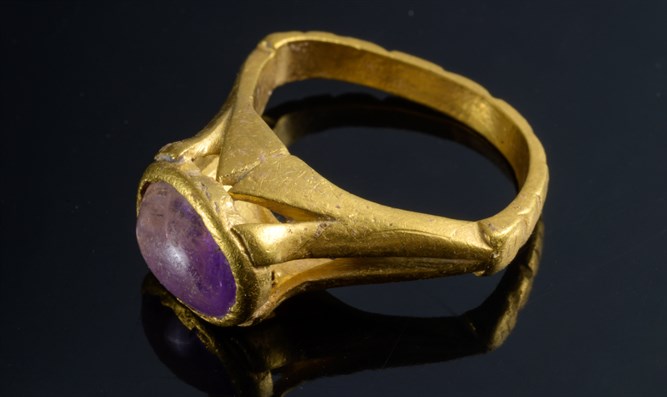 A gold ring with an amethyst stone has been uncovered in excavations in Yavne. The stone is at least 1,500 years old. It is thought to have belonged to a wealthy resident of the city.

Dr. Amir Golani, an expert on ancient jewelry at the Israel Antiquities Authority who examined the find, said that “the person who held the ring was a wealthy man, and the wearing of the jewel indicated his status and wealth. Such rings could be worn by both men and women.

Amethysts are one of the 12 stones of the Choshen worn by the Kohen Gadol.

Researchers are debating the date of the ring. It was found in a fill dated to the end of the Byzantine period and the beginning of the Early Islamic period – the 7th century CE, but it is possible that the ring, due to its beauty and prestige, was transmitted from generation to generation over the centuries. Gold rings inlaid with amethyst stone are known in the Roman world, and it is possible that the ring’s find belongs to the elites who lived in the city as early as the 3rd century CE.

According to Eli Eskozido, director of the Israel Antiquities Authority, “The small, everyday finds that are discovered in our excavations tell us human stories and connect us directly to the past. It is exciting to imagine that the man or woman to whom the ring belonged, walking right here, in a different reality to what we know in today’s city of Yavne.”