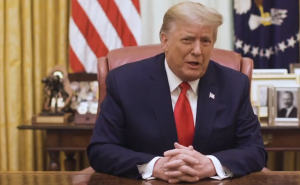 President Donald Trump released a video statement from the Oval Office on Wednesday evening, in which he condemned political violence and criticized social-media censorship – but did not address the fact that he’d been impeached by the House of Representatives around 90 minutes earlier.

“Like all of you, I was shocked and deeply saddened by the calamity at the Capitol last week,” Trump said. “There is never a justification for violence – no excuses, no exceptions.”

See the full video below:

Ten House Republicans had joined all Democrats Wednesday afternoon in voting to impeach the president for “incitement of insurrection,” accusing Trump of provoking the riot by his supporters at the U.S. Capitol last week as Congress was voting to certify the 2020 presidential election results, which Trump has repeatedly claimed to be fraudulent.

During the riot, Trump had also released a video of himself calling for peace – but also reiterated his claims of election fraud, and expressed sympathy with the protestors, saying, “There’s never been a time like this, where such a thing happened, where they could take it away from all of us – from me, from you, from our country. This was a fraudulent election. But we can’t play into the hands of these people. We have to have peace. So go home, we love you, you’re very special.”

But in Wednesday evening’s video, Trump unequivocally denounced violence, as there are reports of violent protests by Trump supporters planned in Washington and across the country around the Jan. 20 inauguration of Joe Biden.

“Now I am asking everyone who has ever believed in our agenda to be thinking of ways to ease tensions, calm tempers and help to promote peace in our country,” Trump said. “Every American deserves to have their voice heard in a respectful and peaceful way; that is your First Amendment right. But … there must be no violence, no law-breaking and no vandalism of any kind. Everyone must follow our laws and obey the instructions of law enforcement.”

Toward the end of his 313-second video statement Wednesday, the president condemning social-media censorship. “These are tense and difficult times,” said the president. “The efforts to censor, cancel and blacklist our fellow citizens are wrong and they are dangerous. What is needed now is for us to listen to one another, not to silence one another.

“All of us can choose, by our actions, to rise above the rancor and find common ground and shared purpose.”

The video statement was released around 90 minutes after the impeachment vote, but made no reference to impeachment. The president did issue a general call for unity, saying, “Today I am calling on all Americans to overcome the passions of the moment, and join together as one American People. Let us choose to move forward united, for the good of our families, our communities, and our country.”

The video was posted four hours after The White House released a brief written statement from the president in which he also called for peace unequivocally, without reiterating his claim about election fraud.

The written statement reads, in full: “In light of reports of more demonstrations, I urge that there must be NO violence, NO lawbreaking and NO vandalism of any kind. That is not what I stand for, and it is not what America stands for. I call on ALL Americans to help ease tensions and calm tempers. Thank You.”