Facebook Blocks Trump for at Least Rest of Presidency, Saying Risks Are ‘Too Great’

Facebook said it would block U.S. President Donald Trump‘s accounts “indefinitely” and for at least the next two weeks until the presidential transition is completed.

The decision by Chief Executive Officer Mark Zuckerberg comes after Facebook announced on Wednesday it would lock Trump‘s account for 24 hours as tech giants scrambled to crack down on his claims about election fraud after hundreds of Trump supporters stormed the U.S. Capitol.

“We believe the risks of allowing the President to continue to use our service during this period are simply too great,” Zuckerberg said in a Facebook post on Thursday. He said the block would also apply to Facebook-owned Instagram.

Social-media companies have been under pressure to police misinformation about the U.S. election on their platforms, including from the president. Trump and his allies for months have amplified unproven claims of election fraud and the president told protesters to go to Capitol Hill, with both Republicans and Democrats saying he was responsible for the resulting violence.

In a video posted platforms like Facebook and Twitter on Wednesday, which was later deleted by the platforms, Trump repeated election fraud claims as he told protesters to go home.

Below is the full text of Trump’s video statement:

I know your pain. I know you’re hurt. We had an election that was stolen from us – it was a landslide election, and everyone knows it, especially the other side.

It’s a very tough period of time. There’s never been a time like this, where such a thing happened, where they could take it away from all of us – from me, from you, from our country. This was a fraudulent election.

But we can’t play into the hands of these people. We have to have peace. So go home, we love you, you’re very special.

You’ve seen what happens, you’ve seen the way others are treated, that are so bad and so evil. I know how you feel. But go home, and go home in peace.

“His decision to use his platform to condone rather than condemn the actions of his supporters at the Capitol building has rightly disturbed people in the U.S. and around the world,” said Zuckerberg in his Thursday post.

Facebook has previously been blasted by lawmakers and employees for not acting on inflammatory posts from Trump, including those that have been labeled by Twitter. 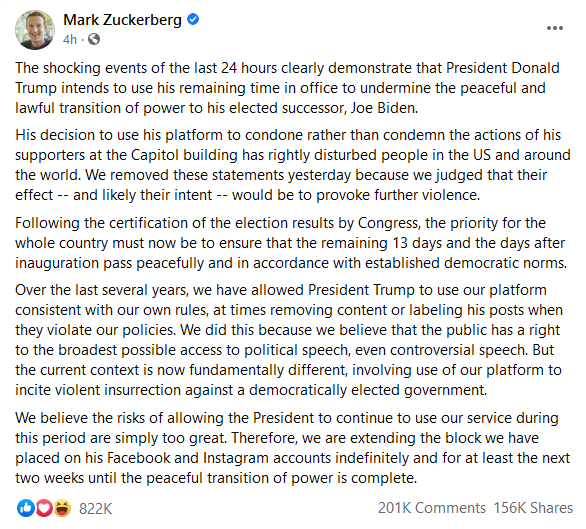