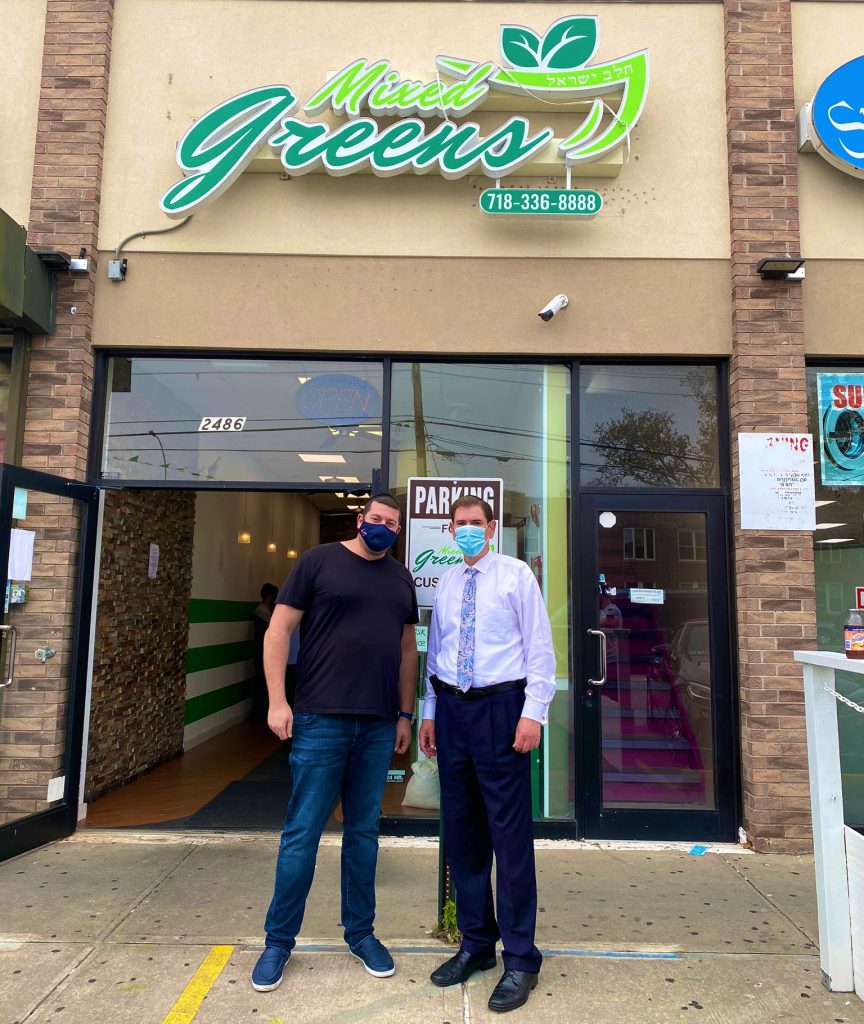 A kosher café owner who received a wrongful summons from New York City amid the state’s controversial COVID shutdown, has experienced a national outpouring of support.

Mixed Greens Café, on Coney Island Avenue and Avenue V in Brooklyn’s Homecrest neighborhood, was open Tuesday for takeout and delivery only, as required for restaurants in a “red zone” hotspot, when a man in plainclothes entered at 3:30 p.m., store owner Jacob Green told Hamodia Wednesday evening.

The man asked if he could sit down and eat, but Jacob’s cousin Mike Green, the manager who was in the store at the time, said the store was only open for takeout and delivery. The man then identified himself as an officer of the City Department of Consumer Affairs, and proceeded to write the store a summons for keeping its doors open.

The store manager, Jacob’s cousin Mike Green, can be heard pleading with the officer, “I’m struggling here every single day. It’s hard for me. There was nobody inside the store, obviously, because we don’t have dining, we only have takeout. There was nobody in the store and I’m only getting a ticket because my doors are open?”

As Mike makes his case, the officer says, “I’m not here to argue; I’m just reporting.”

The summons said the business was being cited because it “failed to keep the store closed for pedestrian and customer traffic.”

Several hours later, Mike got in touch with City Councilman Chaim Deutsch, who reached out to the City Health Department about the incident.

“The Health Department said they had to reach out to the restaurant inspectors and could not give them an answer on the spot,” Deutsch recalled, in an interview with Hamodia Wednesday evening. “But the Health Department is an agency that works with other agencies to put together these guidelines, and if they don’t have an answer on the spot, how are business owners supposed to know the guidelines?”

On Tuesday evening, Deutsch tweeted video of Mike’s exchange with the inspector, writing, “Why would anyone want to open a business in NYC??” The video also went viral on several popular social-media accounts.

Before long, Mixed Greens began hearing from people near and far, outraged at the incident.

“We had a tremendous amount of support,” Jacob said. After Deutsch and other social-media accounts tweeted a link to Mixed Greens’ website, “people from across the country started ordering food, and said we should give it to homeless people.”

This was not the first wrongful summons handed out to Jewish entities during the two-week-long recent shutdown. Last Thursday, two Queens yeshivos in yellow zones, where schools are permitted to be open, were issued summonses by the City Health Department; and on Monday, the State Health Department cited a Boro Park building-supply store, which is in fact an essential business. Both were subsequently rescinded, but served to deepen anger over COVID regulations and regulators in a community that already sees itself as a target of disproportionate criticism and enforcement.

The city has issued a total of 26 summonses to private schools, and 18 to houses of worship, across red, orange and yellow zones. Since September 29, the city has issued 455 violations to businesses and 11,404 warnings. A spokesman for Gov. Cuomo was not immediately available to provide data on state summonses.

A Hamodia reporter asked Mayor Bill de Blasio at a press conference Wednesday morning about this incident with Mixed Greens, as well as the overall perception among some in COVID hot zones that they are being targeted by overzealous inspectors seeking technical violations to issue fines.

De Blasio replied that he was “not familiar with that incident,” but that he would “make sure we follow up on that.”

Turning to the overall complaints, the mayor, who recently met with Jewish leaders and expressed an interest in resetting once-warm relations that had undergone difficulties due to perceived disparate treatment during the COVID pandemic, said, “I don’t want to see people penalized if it isn’t something that’s truly important,” and that “we cannot in this moment have any enforcement or anything else that is unfair or unequal. Concerns were raised about whether stores of one background were being treated differently than stores or another background. We can’t have that. That’s just not acceptable. I want to tell you, it’s, to me personally, offensive that anyone would show discrimination towards the community in this moment, and all of us need to understand that we’re fighting a challenge together, shoulder to shoulder, and so we’re going to send a very clear message to all agencies to make sure that enforcement is fair and is equal for all.”

And the councilman expressed further support for the cafe by going there with his wife, Sara, to pick up lunch Wednesday afternoon.

Shortly after 4:30 p.m., City Hall told Hamodia that the fine had been rescinded.

Deutsch said in a statement that it is “unconscionable that the city and state are continuing to harass small business owners, already struggling to survive due to the COVID shutdowns.”

“We must continue to be vigilant in supporting and protecting our local businesses,” Deutsch said. “The impacts of Cuomo’s shutdown are long lasting, but we will not allow our community to fall apart. If we can’t count on the state to protect us, we will protect each other.”

Jacob Green, who was invited to Tucker Carlson’s Fox News show to tell his story Wednesday night, later told Hamodia, “The outpouring of support has been just amazing; I’ve never seen anything like this. America is truly the greatest place to live,” adding, “Support small businesses, because we need it.”

Green did not express criticism toward the government.