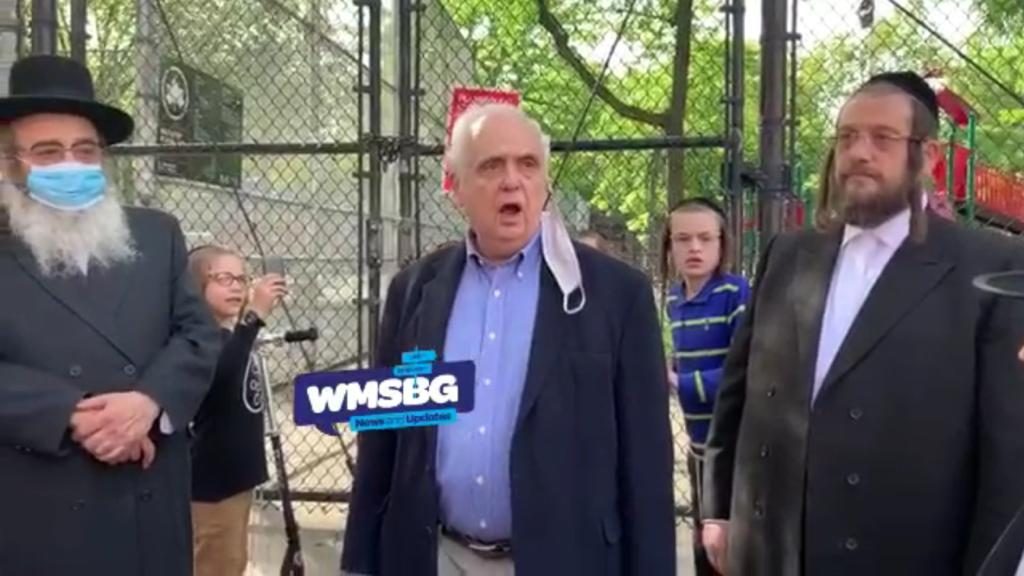 Two Williamsburg playgrounds, shuttered since the coronavirus hit, were forced open Monday by residents frustrated over a shutdown that has lasted for nearly three months, despite a severe reduction in the number of coronavirus cases in New York and exceptions being granted to the thousands who have gathered in the streets of the city for Black Lives Matter protests.

Residents, community leaders and elected officials have held protests at playgrounds since Thursday, amid mounting frustration over what many Brooklyn residents see as a double standard – Mayor Bill de Blasio’s allowing protest gatherings to continue just blocks from where children and mothers have been expelled from playgrounds.

“Our kids have been locked up at home for three months,” said Assemblyman Joe Lentol, standing Monday afternoon outside the chained gates of Middleton Playground, flanked by UJO President Rabbi Moshe Dovid Niederman and community activist Moishe Indig. “And now that summer is here, they can’t even go to a place to play. What kind of a message does chaining up their playground send to the world?”

Then, channeling another elected leader standing at a political barrier decades ago, Lentol declared, “Mr. Mayor, open up this park! Open up this playground!”

“The message should go out,” said Lentol, “that there are playgrounds that have already been opened. I don’t know why this particular playground has been targeted; it shouldn’t be. There are people who get a free pass – they protest in the street, nobody bothers them … What about our children? Our children deserve a playground.”

The gates of Middleton playground had been welded shut earlier Monday – apparently because several Brooklyn playgrounds have had their chains broken by residents – raising an outcry from community members and leaders.

“Welding the doors shut at Middleton Playground during a time when our children need the open space to run and play is UNACCEPTABLE,” Lentol tweeted.

The welding was later removed and replaced with the standard chains prior to the protest.

“We can’t have our children and families suffer,” said Rabbi Niederman. “Enough is enough! Three months is more than enough.

“The children need their freedom to play, families have to have a safe place to stroll with their children … We deserve the same as others. We’re not asking [for any] special accommodations. If you walk through [other neighborhoods, the parks are] open. This park has to be open as well.”

Several people used a bolt cutter to break the chains on the park, which runs on Lynch and Middleton Streets, between Lee and Bedford Avenues, and then everyone, from Lentol and the community activists to the parents and children, took a walk in their reacquired open spaces. Police nearby made no attempt to prevent entry to the park.

The group was joined by Heshy Tischler of Boro Park, a radio personality and former City Council candidate, known lately as the “Parkbuster” for his recent efforts to open shuttered playgrounds.

Some of the protestors, including Tischler, then proceeded to another locked park, Bedford Playground, on Bedford Ave. and South 9th St. Several people pushed open the loosely chained gates, and the crowd entered. One person nearby screamed at the group, but police officers at the scene only sought to restrain the man, and did not stop the adults and children enjoying their late spring afternoon in the park.

Residents said they hope the city will make no further efforts to shutter the playgrounds.

“Our children’s health is always our priority,” Tziri Hershkovits, a mother of four, told Hamodia. “That is why we made the effort to give our kids fresh air and exercise. If the government cared at all about their physical and emotional well-being, they would encourage park-going, not stop it.”

Felder, Assemblyman Simcha Eichenstein, and City Councilman Kalman Yeger, who represent Boro Park and Midwood, had held a protest at a Midwood park Sunday but did not break open the locked gates. But on Monday evening, they, too, indicated that they would soon take action.

“We’ve asked nicely and waited patiently,” tweeted Felder. “We’ve made every logical argument. The people have spoken and they’re running out of patience. If @nycmayor won’t open ALL our playgrounds, @SEichenstein @KalmanYeger and I will cut the locks open ourselves.”

Monday’s incident was the latest headline-making conflict between de Blasio and the city’s Orthodox Jewish community during the coronavirus pandemic. The mayor had previously enjoyed a warm relationship with the community during his six years in office.

After de Blasio broke up a large funeral in Williamsburg on April 28, he tweeted, “My message to the Jewish community, and all communities, is this simple: The time for warnings has passed. I have instructed the NYPD to proceed immediately to summons or even arrest those who gather in large groups. This is about stopping this disease and saving lives. Period.” The tweets drew a torrent of criticism nationally for singling out the Jewish community, particularly as there has been a surge in anti-Semitic incidents in the city and around the nation during the past two years. De Blasio initially did not apologize for those comments, but said, “I regret if the way I said it in any way gave people a feeling of being treated the wrong way. That was not my intention. It was said with love – but it was tough love.”

Criticism of the mayor continued when police descended on Williamsburg the following day and gave large numbers of summonses to people for not socially distancing or not wearing masks, in what critics describe as a vengeful ticket blitz. Then, when large numbers of people gathered in parks the following weekend, eliciting no complaints of the mayor, he was accused of a maintaining a double standard in social-distancing enforcement.

On May 4, the mayor called a briefing for Orthodox media outlets, in which he apologized for the tweet, but disputed a reporter’s assertion that his relationship with the Jewish community had become “fractured.”

The community’s displeasure with the mayor deepened in recent weeks, as he continued to enforce the ban on prayer gatherings of more than 10 people at houses of worship, and the shuttering of non-essential stores, even while allowing large Black Lives Matter protests. Asked about this apparent discrepancy at a press conference by a Hamodia reporter, the mayor replied, “When you see a nation, an entire nation, simultaneously grappling with an extraordinary crisis seeded in 400 years of American racism, I’m sorry, that is not the same question as the understandably aggrieved store owner or the devout religious person who wants to go back to services.”

That comment received a torrent of criticism nationally, in conservative media circles and among religious-liberties advocates.

“You’re 100% wrong,” Assembylman Simcha Eichenstein tweeted at de Blasio. “Sure, protesters have the right under the first amendment to march against racism, which needs to be confronted head on in this country, but the same first amendment guarantees religious people the right to practice their faith.”

The Hamodia reporter subsequently asked the mayor several days later how his comments that these protestors be given allowances not afforded others during the pandemic, is consistent with the U.S. Supreme Court’s ruling that First Amendment regulations must be viewpoint-neutral, and the mayor replied, “I’m not a lawyer, but I feel very strongly … on the common-sense point here, which is, we are seeing a national historic moment of pain and anguish, and a deep cry for help, and a deep cry for change. It is not your everyday situation.”

Outrage at the mayor persisted when children and mothers in Williamsburg were expelled last week from playgrounds, which have been legally shuttered during the pandemic, while Black Lives Matters protests were allowed to be held just blocks away. De Blasio defended the policy to a Hamodia reporter by defending the preference given to protesters due to the importance of that “very particular” cause.

Finally, after several days of protests at shuttered playgrounds in Williamsburg, Boro Park, and Midwood, the protestors broke chains and began using the parks.

House Minority Leader Kevin McCarthy (R-Calif.) tweeted, “Total double standard → New York’s mayor appears to be discriminating against Jewish funerals, schools, and playgrounds in enforcing his coronavirus shutdown. If Americans can protest, families should have access to their neighborhood parks.”