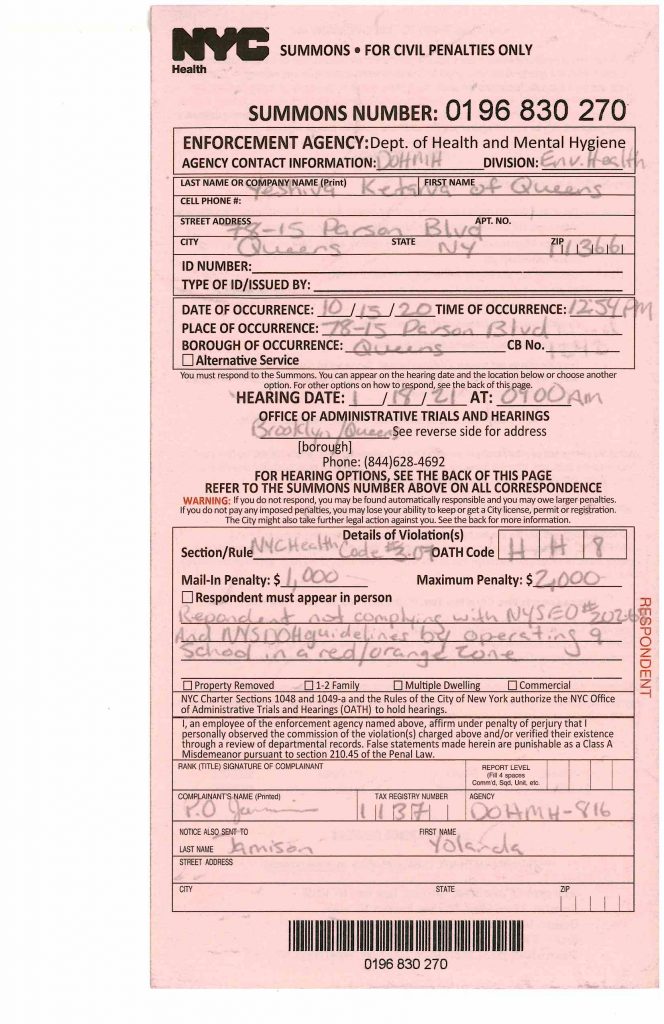 Two Central Queens yeshivos located in zones that permit school to be open, were erroneously issued summonses Thursday by a pair of New York City Health Department inspectors, before being rescinded hours later.

Early Thursday afternoon, two City Health Department inspectors came to Yeshiva Tiferes Moshe, at 83-06 Abingdon Road in Kew Gardens –  a “yellow zone,” in which schools are permitted to operate. The officials said the yeshiva was not allowed to be open, and tried handing a summons to administrators, who refused to accept it. The officials said the summons would be mailed, Assemblyman Daniel Rosenthal told Hamodia.

In a letter to parents, principal Rabbi Yaakov May said that the agents “did not enter any student area and did not conduct an inspection of our building.”

A short time later, the same two inspectors showed up at Yeshiva Ketana of Queens, located at 78-15 Parsons Blvd. in Fresh Meadows, also a yellow zone. The officials handed a written summons to a yeshiva administration official, who spoke to Hamodia on condition of anonymity.

“I asked them why I was issued a summons,” the yeshiva official said, “and they told me, ‘You are operating a school illegally in a red zone.’ I explained that I have an email from the City Education Department confirming that our school is located in a yellow zone. I offered to show them the email and they said, ‘It does not matter. Our supervisor, Deputy Martinez, said you are in a red zone and we should issue you a summons.’ I asked to speak with Deputy Martinez and they told me I could not.” The inspectors gave the yeshiva a $1,000 fine.

The yeshivos reached out to Rosenthal and City Councilman Rory Lancman and Agudath Israel, who contacted city officials, and Hamodia sent an inquiry to the Health Department’s communications office. Hours later, the summonses were rescinded.

A Health Department spokesman told Hamodia, “If a violation is issued in error, it will be withdrawn, as happened today. We strive to enforce the rules fairly.”

Elected officials and community members who spoke with Hamodia wondered how these summonses could have been issued in the first place.

Community activist Nechemiah Hoch said, “We try our best to keep the laws and obey the state’s mandates. Our yeshivos were open in keeping with those rules, and it is unconscionable that we were cited despite following directions.”

“People are on edge,” said Lancman, “and the city needs to be really careful and really precise, both so it gets the science right and people feel that they are being treated with respect.”

Lancman said he does not believe that yeshivos are being purposely summonsed wrongfully, but that this was “an honest mistake,” and that “I expect an explanation for how it will be prevented in the future.”

“Nobody in city government would deliberately ticket a yeshiva knowing it was unwarranted,” said Lancman. “I guarantee you this was a bureaucratic mistake emblematic of the incompetence of the de Blasio administration.”

Rosenthal said he would “like to think this was merely yet another display of City Hall’s utter ineptitude in governing.”

In his letter to parents, Rabbi May of Tiferes Moshe said, “Our Parents Association has enhanced the simcha and spirits of our talmidim by distributing ices in class today We look forward to continued in-class activities to enhance school ruach.