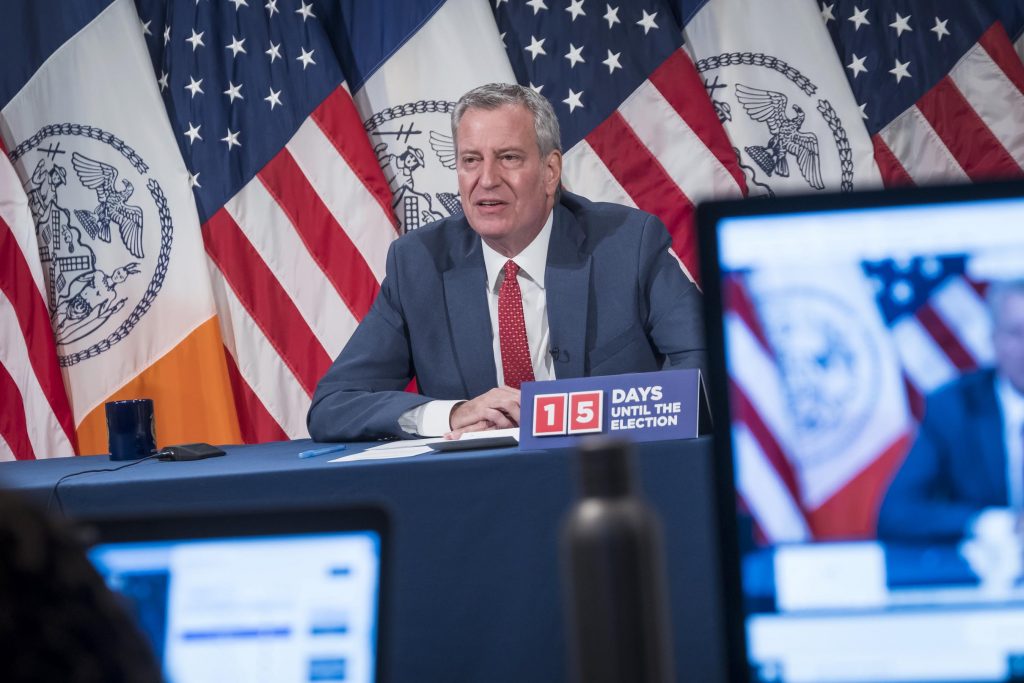 As tensions between community residents and NYC and NYS authorities bubbled to the surfaced in that past few days, Mayor Bill De Blasio had a phone conversation on Monday evening, October 19th, 2020, with leaders of the Jewish community where both sides sought to diffuse the situation.

The meeting was described by a source quoted on BoroPark24.com as positive, and focused on improving communications between Jewish communities and city and state governments. In the course of the discussion, both the mayor and the Jewish community leaders committed themselves to cultivating a more sensitive approach towards each other, and moderate their reactions when situations arise.

Of the subjects discussed were the feeling of overzealous enforcement, which involved multiple city agencies, including the Dept of Buildings, NYPD, FDNY and the Sheriff, allegedly flooding Boro Park and relentlessly targeting Jewish institutions and businesses. Citations for violations were issued regardless of claims that these businesses were listed as essential businesses on the Empire State Development site, which posts a list of essential businesses permitted to be open in accordance Governor Cuomo’s recent Executive Order 202.68.

The mayor responded that he understood and admitted that perhaps the city overreacted in terms of enforcement, and that it would enforce compliance in more measured ways.

At a news conference Tuesday morning, October 20th, a reporter questioned the mayor about the phone call the previous evening. “[A] report says that both community leaders and yourself expressed certain regrets on the approach they took early on. I wanted to see if you can expand on that – whether you think that the community and city government is on the reset.”

Mayor de Blasio responded by agreeing with the premise, saying, “I think we absolutely need a positive reset. It was a very moving meeting, a very productive meeting… We really took our time to talk through everything that happened from the beginning of the pandemic and how painful it’s been for everyone and how confusing it’s been. But I think what the meeting really helped me to appreciate is that so many people in the community have suffered and they need to know that we, as the city government, understand their suffering, understand the difficulties the community has gone through, understand the fears that people have rightfully of discrimination, and that we need to hear each other more and understand each other more.

“I did express my regrets… I look back now and understand there was just more dialogue that was needed. I certainly got very frustrated at times when I saw large groups of people still out without masks, but I think more dialogue would have been better. So I certainly want to express my regret that I didn’t figure out how to do that better, and obviously, you know, that one night in Williamsburg, I let my frustration and concern get away with me and I should have been more careful in my language. I’ve expressed my apology for that before, but I think it was a good, honest conversation about how hard it is to get people in the community to understand in an ever-changing environment why the information coming from the government is something they can have faith in when there’s been so many changes.”

Community leaders have expressed the need to comply with the health and safety guidelines, with the hope that the descending rates will allow the yeshivos, shuls and businesses to reopen in the near future.