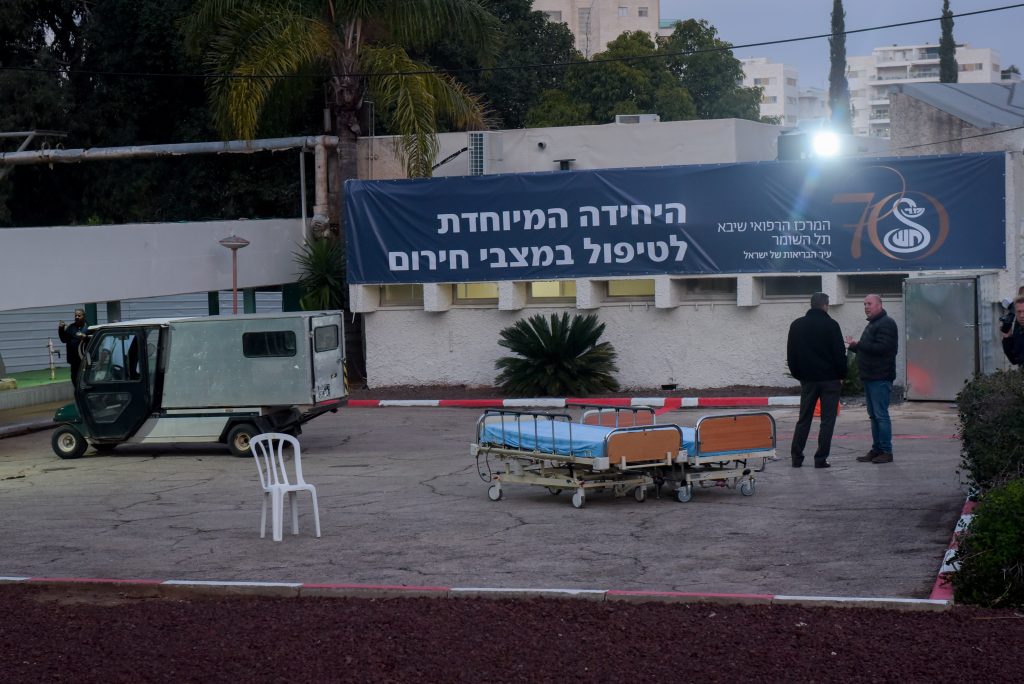 After two weeks in which they were isolated from the rest of the world – and even from other passengers – eleven Israelis who were aboard the Princess Diamond cruise ship landed in Israel early Friday. They were taken directly to Sheba Hospital outside Tel Aviv, where they will remain in isolation for a week.

The eleven were passengers on the ship who did not show signs of being infected with coronavirus. Four other Israelis were removed from the ship, after they did display symptoms and were diagnosed as having contracted the virus. They remain in a hospital in Japan, although officials said they were hopeful the four could be returned to Israel next week.

Upon arrival, the group was surrounded by a crowd of journalists – who were kept at bay by police wearing protective masks. One of the passengers made the brachah of shehechiyanu, and several prostrated themselves and kissed the ground, traditionally a sign of thanksgiving for having arrived in the Holy Land.

Professor Itzik Kreiss of Sheba Hospital said that staff would do whatever they could to make the travelers comfortable, given the trauma they had just experienced.

The eleven are being hosted in a building off the main campus of the hospital that in the past was used to house hospital workers. The rooms have been outfitted with “smart beds,” which will measure key body factors while they sleep to monitor them for infection. They will also be subject to blood pressure and other tests several times a day.

Dr. Gadi Siegel, who is in charge of the unit, told Yisrael Hayom that some of the passengers had chronic conditions, like heart issues, but “we know they were not sick when they got on the ship, and we are relating to them as such. We are keeping an eye on their overall condition, and we are ready for any developments.” Siegel admitted that “the criticism that we are being overcautious may be legitimate, but it must be remembered that we are dealing with a disease that we know very little about, so it’s important to keep track of even small details.”

Meanwhile, a snag has developed in the Health Ministry’s plan to dedicate a whole hospital to treating coronavirus victims and those suspected of having contracted the virus. Hundreds of people have been taken in recent days to emergency rooms for examination, placing a heavy burden on staff there who need to cope with “regular” emergencies.

In response, the Health Ministry has proposed dedicating an underused geriatric hospital in Rishon LeTzion for treatment of coronavirus victims. The municipality said that it would seek a court injunction against the plan, claiming that the ministry had not fulfilled several conditions that it committed to fulfilling before opening the facility.