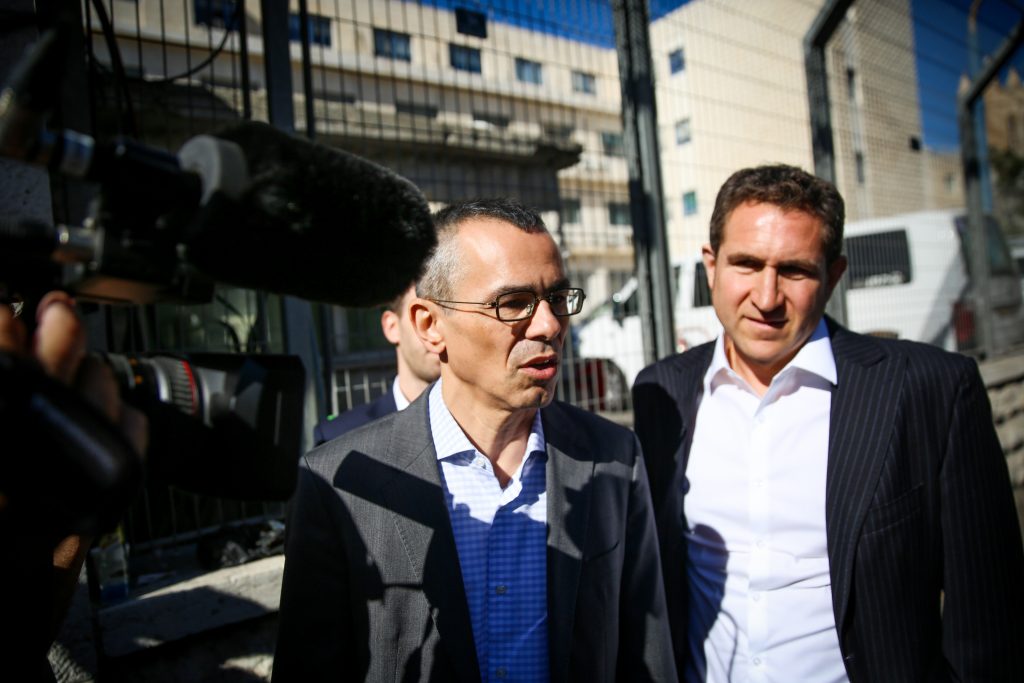 Attorneys for Binyamin Netanyahu on Thursday expressed satisfaction with the first day of hearings into accusations of corruption against the prime minister, after an 11-1/2-hour session Wednesday in which the attorneys presented Netanyahu’s side of the story in the three investigations against him. “We felt there was a willingness to hear us out on the part of the State Attorney,” said Yossi Ashkenazi, a member of Netanyahu’s defense team. “By the nature of things we are presenting a different perspective on the claims that the prosecution has made, and we presented new evidence, including documents that were not in the original material used in the investigation.”

The long-awaited hearings before State Attorney Avichai Mandelblit on the corruption cases Binyamin Netanyahu is involved in began Wednesday. After the hearings, Mandelblit will decide  whether or not to recommend indicting Netanyahu on corruption charges. The investigations against Netanyahu include Case 1000, in which Netanyahu is accused of accepting extravagant gifts from millionaire Arnon Milchin, mostly cigars and champagne; Case 2000, in which the prime minister allegedly leaned on the publishers of Yisrael Hayom to limit distribution of their free newspaper in order to benefit from better coverage in rival newspaper Yediot Acharonot; and Case 4000, also known as the Bezeq-Walla News Case, an influence-peddling probe that alleges that Netanyahu offered his good services to Israeli billionaire Shaul Elovich in return for positive coverage on the Walla news site.

Meanwhile, Knesset Speaker Yuli Edelstein said that Netanyahu – who is still in charge of trying to put together a government – has not given up on the idea of a unity government that includes Blue and White, and was willing to make some concessions to the party in order to push the idea forward. “If Netanyahu is prime minister and he is indicted, the president has already provided a solution. The prime minister will suspend himself for as long as necessary” to work out his legal issues, Edelstein said in an interview on Reshet Bet. The idea was suggested by President Reuven Rivlin last week, and Netanyahu is willing to accept it. “I told him that I fully supported his willingness to pay that price in order to form a government,” Edelstein said.

“This is a leadership move that is not easy to take on,” Edelstein said of the decision. When asked if Netanyahu should remain prime minister at all if he is indicted, Edelstein said that considering the law and the circumstances, it was a fair compromise. According to the law, a sitting prime minister has to resign only if convicted on a criminal charge, not if he is indicted. In addition to Netanyahu’s suspending himself, Edelstein said that he himself was prepared to share the job of Knesset speaker. “If it will help establish a government, I certainly would be willing to do that,” he said.

With that, it did not appear that a government would be formed any time soon, Edelstein said – and it’s all the fault of Blue and White. “Unfortunately, Blue and White rejected the suggestion of the president” on Netanyahu’s suspending himself, “apparently due to internal issues in the party. What is important to the Likud is not to slip into a situation where we have a third election. The prime minister is doing everything he can to avoid that, and it is disappointing that we do not see the same on the other side.”