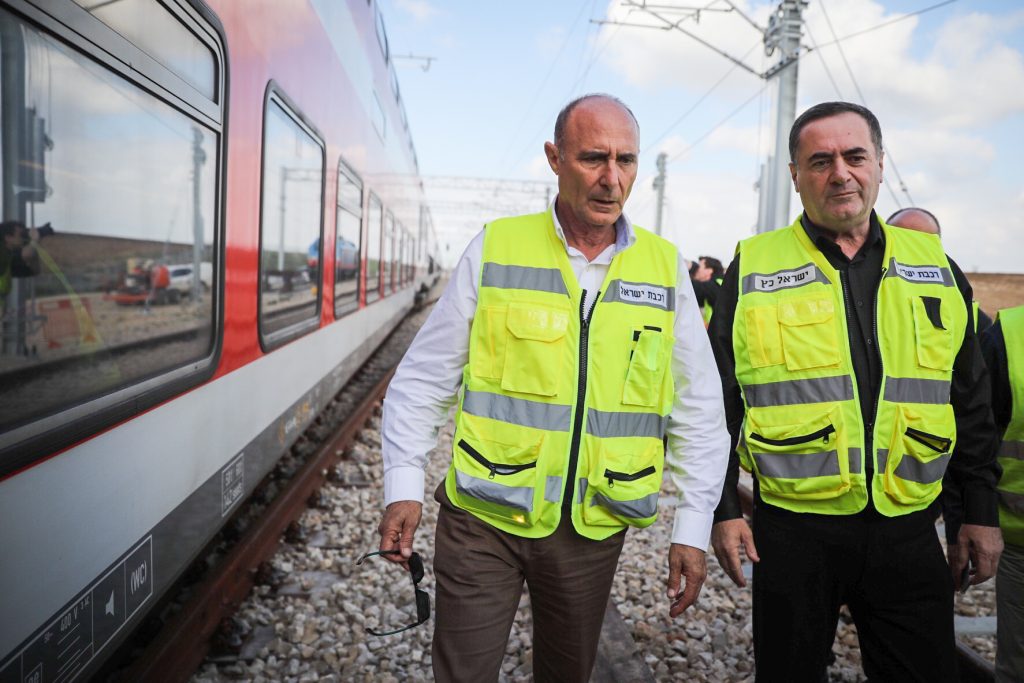 Transportation Minister Yisrael Katz on Tuesday conducted the first test run of the new high-speed railway from Tel Aviv to Jerusalem. The line is set to open on March 30, in about two and a half months.

During the trip, Katz was accompanied by an entourage of Transportation Ministry officials, reporters and supporters. Speaking to the reporters, Katz said that he had decided to name the rail line the “King David Line.” The line “will connect us to Yerushalayim and its history,” Katz said.

Test trips that have been ongoing in recent months indicate that the predictions that the trip between Yerushalayim and Tel Aviv will take less than a half-hour are accurate, with the electric train achieving speeds of up to 160 kilometers per hour (100 mph). The 28-minute trip will include stops at Ben Gurion Airport, Modiin, and Shaar Hagay (where a large parking lot for commuters to Beit Shemesh will be set up).

According to the Transport Ministry, the line will include five kilometers of bridges, including the longest bridge in Israel, at a length of almost three quarters of a mile. It is also the highest bridge, rising to almost 300 ft off the ground. The successful traversing of this bridge by the 1,200 ton train is an excellent sign that the project is sound from an engineering point of view, the Ministry said in a statement, adding that each pass of a train over the bridge will enable it to “settle,” strengthening its pylons and making it more sturdy. Besides the highest bridge, the railway will include the country’s longest tunnel – 7 miles. In addition, the railway’s Jerusalem terminus, which will be about half a mile below ground, is one of the deepest commuter railway stations in the world.

The line will begin operating just in time for Chol Hamo’ed Pesach, and travel for the first three months of its operations will be free, Katz said Tuesday. “The train will take 28 minutes to travel in either direction, and will guarantee further the status of Jerusalem, and further bring it to the country’s business center, making it a more attractive place to live for families to live and start businesses. It will completely change the connection between Jerusalem and the rest of Israel,” said Katz.