Israel Rivlin: “Spain Is for Us One Country”
Israel 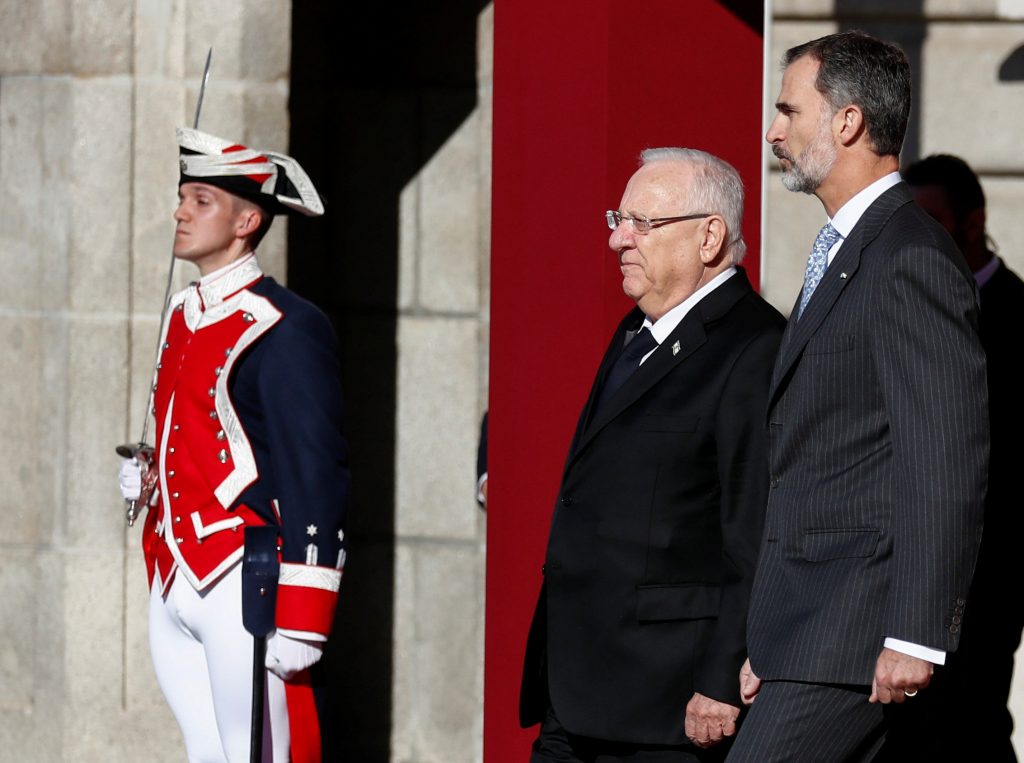 President Reuven Rivlin delivered Israel’s policy on the Spanish political crisis in person on Monday night with a clear statement against Catalonian secession.

“Spain for us is one country,” Rivlin declared at the beginning of a state dinner, affirming Israel’s decision to oppose secession, which came several days ago at the behest of the central government in Madrid.

“His Majesty the King is the symbol of that unity,” he continued. “All of the citizens of Spain are dear to us, and we hope and pray that all conflicts will be solved by peaceful measures.”

President Rivlin and First Lady Nechama Rivlin were guests of honor at a State Dinner at the Royal Palace in Madrid, hosted by King Felipe VI and Queen Letizia of Spain.

Israel’s Sephardi Chief Rabbi Yitzchak Yosef was at the palace for the event as well. Rivlin told the king that Rav Yosef’s father, Hagaon Harav Ovadia Yosef, zt”l, “met your father in a meeting which paved the way for diplomatic relations between Israel and Spain,” some 31 years ago.

The King began his address by wishing the President and his delegation “welcome” in Hebrew. He went on to say, “The tradition that binds us to each other is greater than us in its depth and meaning. This is the legacy of the Jews of Spain, which represents the Golden Age of Jewish culture, a culture that has been preserved for hundreds of years in the language and customs of so many Sephardic Jews throughout the world. Our democratic Spain, founded on a heritage of cultural diversity, is today returning to its historical ties with the Jewish people. In this regard, we will never forget the festive ceremony at the Royal Palace in which we stand today, two years ago, on the occasion of the approval of the law granting Spanish citizenship to Jews of Spanish origin, and the renewed historical meeting that resulted from it. As I said then, ‘how I missed you,’ the Jewish-Spanish people, the Jewish people our friends.

“I proudly stress the position of Spain at the forefront of the fight against anti-Semitism, which includes important public diplomacy initiatives such as the Spain-Israel Center, important political achievements such as ‘Holocaust Remembrance and the Prevention of Crimes against Humanity Day’ marked annually, and similarly, the emphasis of education about Jewish issues, and legislative achievements such as the legal definition of hate crime.

“Mr. President, we know that great aspirations are accompanied by great challenges. We recognize Israel’s legitimate aspirations for peace and security, and hope that your country will live in harmony with its neighbors and develop its ties with the European Union. Israel will find in Spain a partner, an ally, a faithful and committed friend.”