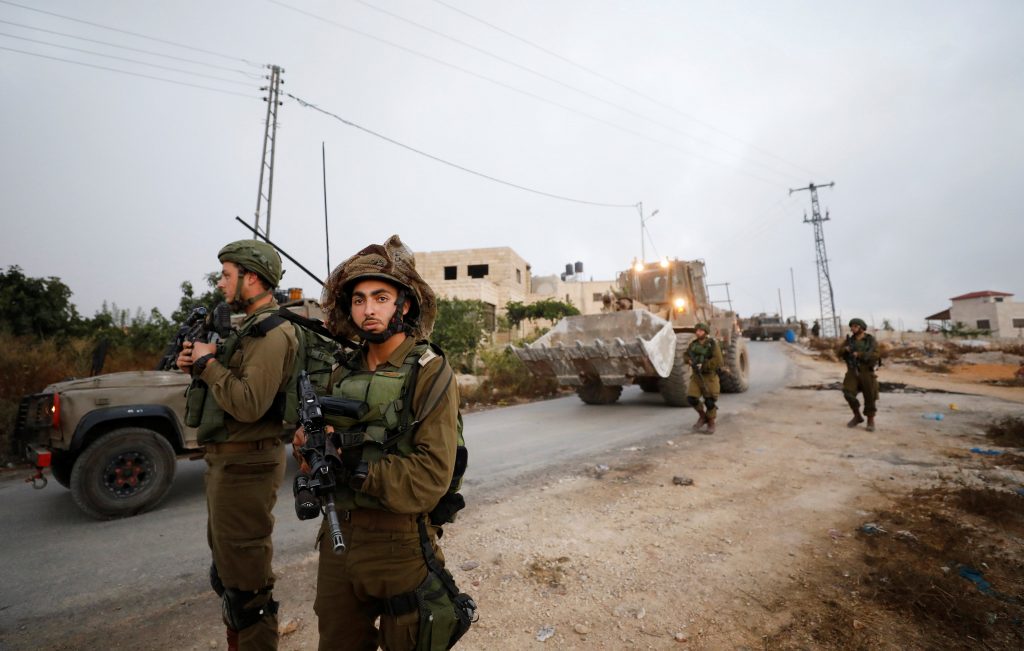 IDF soldiers overnight Tuesday demolished the home of the family of the terrorist who committed the terror stabbing attack in Chalamish last month. The stabbing was carried out by 19-year-old Omar Abd al-Jalil, who walked from his village to Chalamish and carried out the attack, and several family members have been arrested for being accessories and providing assistance to the terrorist, who murdered three people – Yosef Salomon, Hy”d, his daughter Chaya Salomon, Hy”d, and Elad Salomon, Hy”d – as the family gathered for Shabbos in the home of Yosef, the family patriarch, to celebrate the birth of a grandson. The demolition took place less than a day after military prosecutors gave their approval to the action.

Also Tuesday night IDF soldiers continued their accelerated campaign of seizing cash and assets of families of terrorists who received “bonuses” from the Palestinian Authority and Hamas for the actions of families members in murdering Jews. Soldiers seized NIS 117,000 in cash from families in Chevron who had received such payments.

On Tuesday security officials announced that they had seized cash, vehicles, and other items worth NIS 130,000 and NIS 130,000 from families in Arab neighborhoods of Yerushalayim. Among the families targeted were that of Hassan Mahaney, a resident of the Beit Hanina neighborhood of Jerusalem, one of two terrorists who carried out a stabbing attack in October 2015 in Pisgat Ze’ev.

Last month, soldiers seized cash and goods that were provided by Hamas to the family of the terrorist who murdered Israeli police officer Baruch Mizrachi, 46, on Erev Pesach 2014. He was killed in a shooting attack in the Har Chevron area as he was driving with his wife and children to a Pesach Seder.

In a raid earlier this month, thousands of shekels and several vehicles were removed from the home of the family of one of the terrorists who murdered three people in Gush Etzion in November 2015. Among the victims were Rabbi Yaakov Don, Hy”d, of Alon Shvut, and Ezra Schwartz, Hy”d, a yeshivah student from Sharon, Massachusetts.

Overnight Tueday security officials said they arrested 12 wanted security suspects in other areas in Yehudah and Shomron. The suspects were wanted for participating in rioting and throwing stones and firebombs that endangered Israeli civilians and IDF soldiers. Several of the suspects were also charged with belonging to Hamas. All were being questioned on their activities by security forces.