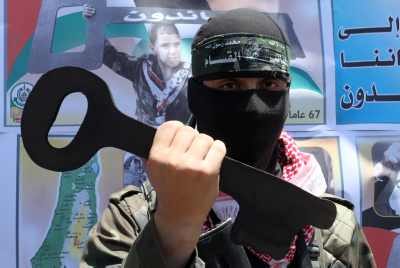 Hamas again warned Israel not to cut electric power to Gaza, as a U.N. official said that reducing the amount of electricity to the Strip would have “disastrous consequences” on the lives of Gazans.

So far, no electricity cuts have been reported in Gaza, but Hamas spokesperson Sami Abu Zuheiri said that there was no reason for Israel not to continue supplying Gaza with electricity. According to Zuheiri, Israel collects $75 million a month in duties for imports to Gaza. Israel transfers that money to the Palestinian Authority in Ramallah, but they could use the money to pay Gaza’s electric bill directly.

Failure to do so, he said, would lead to a “dangerous” situation that would no doubt badly affect the lives of Israelis. Zuheiri reiterated a statement by Hamas that “those who are responsible for this decision – both the Israeli enemy that blockades Gaza, and PA chief Mahmoud Abbas in his immoral role aiding the enemy – will pay. This is a dangerous decision that will lead to an explosion.”

The Cabinet voted Sunday to cut electricity to Gaza, after the Palestinian Authority declared last week that it would no longer pay Gaza’s electricity bill. The IDF recommended going along with the plan in order to strengthen the position of PA chief Mahmoud Abbas in his dispute with Hamas. PA officials declared last week that they were tired of sharing the blame for Hamas’ terror activities, as the humanitarian aid transferred to Gaza – including money to pay for basic services – is used to build terror tunnels and pay terrorists. Channel Two quoted PA officials as saying the ongoing terror activities of Hamas is damaging their standing with the new administration in Washington, and they would no longer pay for those activities.

Under current arrangements, Israel supplies power to Gaza, with the PA billing Gaza residents and transferring the payment to the Israel Electric Corporation. However, the payments account only for a portion of the total bill; the rest is paid by the PA out of money it receives from international donors specifically for the humanitarian needs of Gaza.

“A further increase in the length of blackouts is likely to lead to a total collapse of basic services, including critical functions in the health, water and sanitation sectors,” Piper said in a statement. “The people in Gaza should not be held hostage to this longstanding internal Palestinian dispute,” he added.