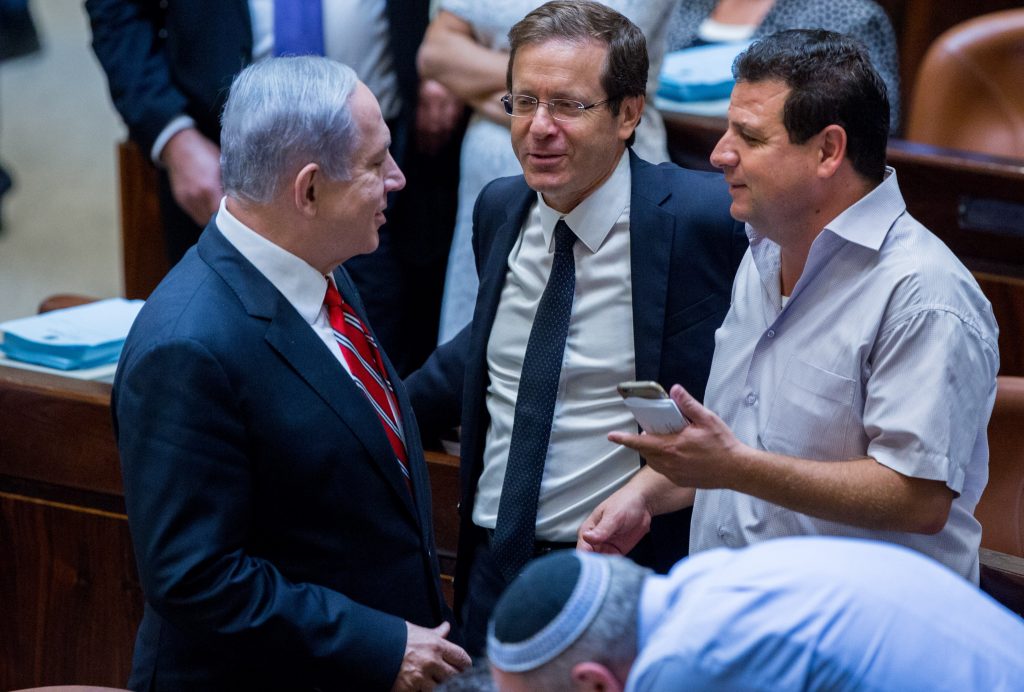 Haaretz on Sunday published the full text of a protocol that it says emerged from a summit held in Aqaba last February, in which Prime Minister Binyamin Netanyahu reportedly recommitted to the two-state solution and to withdrawing from large swaths of Yehudah and Shomron. According to Sunday’s report, Netanyahu made a formal proposal for a unity government to opposition head Yitzchak Herzog, offering him the post of foreign minister in a government that would adopt the protocol as its policy. According to sources in Herzog’s Zionist Camp, however, Netanyahu later cooled to the plan, in the wake of the anger on the right over the forced removal of residents of Amona.

According to news reports that emerged over the past month, Netanyahu reportedly agreed to freeze construction outside settlement blocs in Yehudah and Shomron if the United States and Arab countries permitted Israel to build inside the blocs. Discussions on the plan took place at a secret meeting a year ago in Aqaba between Israel, Jordan and Egypt. The meeting was chaired by then-Secretary of State John Kerry.

In exchange for Israeli building in the settlement blocs, Netanyahu offered a plan that would allow for massive Palestinian building in the rest of Area C, essentially subsuming those areas into a future Palestinian state. A major infrastructure project would be developed in Gaza, and Israel would increase its security cooperation with the Palestinian Authority, the report said.

Israel would also declare its commitment to negotiate with the Palestinians on the basis of the 2002 Arab peace plan, stressing its willingness to discuss aspects of the agreement with Arab states in the region. The agreement would also include an aspect of regional cooperation, with Israel inviting officials from Saudi Arabia and the Sunni Gulf States to a summit at which Netanyahu would represent Israel. In addition, the U.S. would promise to put pressure on the PA to rein in its excessive anti-Israel and anti-Semitic rhetoric.

Sunday’s report featured text of a protocol based on the meeting that Netanyahu reportedly submitted to Herzog. In the protocol, which was written in English, Netanyahu committed to “extending its hand to the Palestinians to begin direct, bilateral negotiations without preconditions. In the context of the renewed peace effort, Israel’s settlement activities in Yehudah and Shomron [the West Bank] will be implemented in a manner that would facilitate a regional dialogue for peace and the goal of two states for two peoples. Israel will work with the Palestinian Authority to significantly improve economic conditions and economic cooperation, including in Area C, and to enhance security coordination.”

The document, which was based on Netanyahu’s declaration at the Aqaba summit, underwent several changes at the request of both Herzog and the prime minister, the report said. A short time before the two were to announce it publicly, however, former President Shimon Peres passed away – and the anger over the removal of residents of Amona reached its height. At that point, sources in the Zionist Camp were quoted in the article as saying, Netanyahu gradually backed off from his commitments and let the declaration die. Negotiations continued throughout September, reaching a crisis point on Erev Yom Kippur, with a veritable shouting match between Netanyahu and Herzog. The meeting adjourned for the holy day, and after Yom Kippur the two agreed that there would be no deal, the report added.

Haaretz quoted the prime minister’s office as saying in response that “the description concerning the possible regional process that wasn’t realized is false from the ground up. The matter has nothing to do with Amona. Prime Minister Netanyahu is interested in advancing a regional initiative. Whoever is giving you this information isn’t knowledgeable of the details, or is falsifying them.”