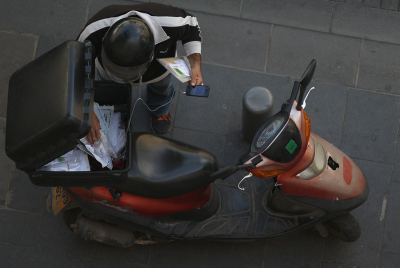 Just as car imports appear to be coming close to setting a record in 2016, so are imports of two-wheeled motor vehicles, including mopeds and motorcycles. 16,089 such vehicles were sold in Israel in the first 11 months of the year, and with over 1,000 more on order, the total for the year is set to exceed 17,000.

The numbers relate to vehicles with engines at least 125cc in size. While drivers in Tel Aviv would be forgiven for being under the impression that tens of thousands of mopeds and motorcycles were imported each year, given their ubiquity, the fact is that the two-wheeled vehicle market was depressed for several years, and many of the vehicles plying Israel’s roads were older models. The last big years for two-wheeled imports was 2007 and 2009, when around 18,000 vehicles were sold.

Safety officials are pleased that imports are way up this year, as new models of two-wheeled vehicles come equipped with advanced safety features that could save lives in the event of an accident. According to industry officials, these safety improvements are an important factor in the increased sales this year. Two-wheeled vehicles are favored by many businesses, including messenger services and food delivery operations, because they are able to weave in and out of traffic in crowded urban areas.