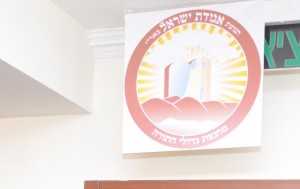 The Moetzes Gedolei HaTorah of Agudas Yisrael in Eretz Yisrael convened Monday evening to discuss the urgent matters of religious persecution in Eretz Yisrael that are threatening the Jewish world in general and the Torah world in particular. Specifically, they discussed the recent recognition that the Israeli government has given to the Reform community and the attempts to interfere in the curricula of chareidi elementary and high schools.

The meeting took place at the headquarters of the World Executive Committee of Agudas Yisrael in Yerushalayim. It was attended by the Rebbes of Ger, Belz, Vizhnitz, Slonim,  Biala, Seret-Vizhnitz, Modzhitz and Sadigura, shlita.

The discussions centered on the threat of the government’s decision to allow the Reform movement a foothold in Israel, at the Kosel and in other matters. This was a follow-up from a meeting held one month ago on the same matter.

The Gedolim have asked the MKs of Agudas Yisrael to do whatever they can to prevent these laws from passing.

The Gedolim also discussed the issue of Torah education and girls’ high schools, where the government wants to interfere in the curriculum content and violate their independence. The independence of the chareidi mosdos has been the object of the community’s fortitude over the years to uphold its mesorah, without any outside intervention.

The various decrees are being planned and executed in the central and local governments, in the legal system, headed by the High Court, and in the media, which incites constantly against the chareidi community, delegitimizing and defaming it.

To this end, the Moetzes has called for the founding of an independent council for chareidi Talmudei Torah and schools.

The Gedolim discussed a range of vital issues and ways to ensure that the rights of the chareidi community are preserved, and instructed the MKs to implement their wishes.