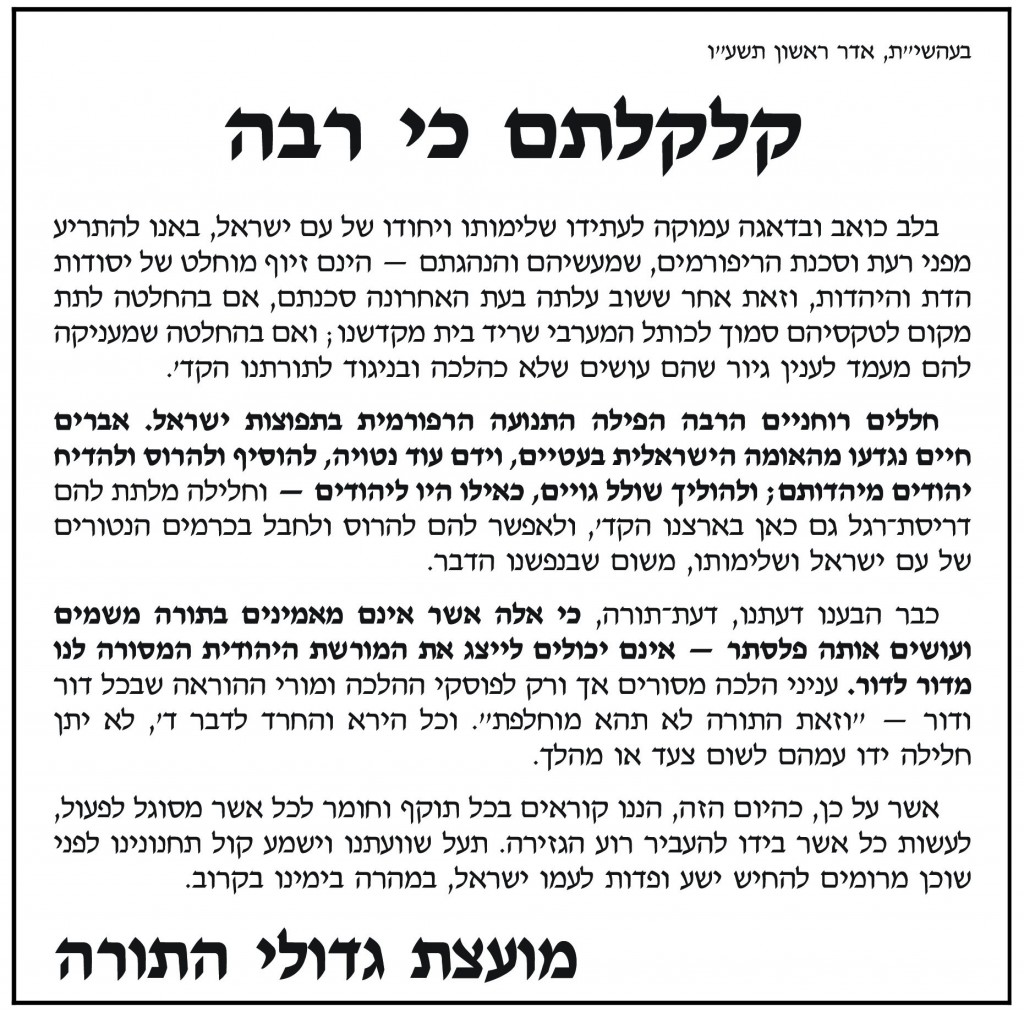 The Moetzes Gedolei HaTorah of Agudas Yisrael in Eretz Yisrael issued a powerful condemnation of the government’s decision to allow the reform movement a foothold in Israel, at the Kosel and in other matters. The Moetzes Chachmei HaTorah of Shas issued a very sharply worded declaration of protest earlier in the week.

On Thursday, the Israeli Chief Rabbinate echoed the call of the Gedolei Yisrael and issued a scathing denunciation of the decision as well.

The kol korei of the Moetzes of Agudas Yisrael — which is comprised of the Rebbes of Ger, Belz, Vizhnitz, Slonim, Sanz, Boyan, Biala, Seret-Vizhnitz and Sadigura — was issued after the Gedolim met on Wednesday in Yerushalayim about this issue.

In their proclamation, the Gedolim cited the grave spiritual damage caused by the reform movement in the Diaspora, and said that no one should lend them a hand in spreading their destruction to Eretz Yisrael, where they are liable to “drive Jews from their Judaism.”

“Those who don’t believe in Torah min haShamayim cannot represent the Jewish tradition that has been passed on to us from one generation to another.” They called upon anyone with the power to act to do so, to “nullify the terrible decree.”

Earlier in the week, the Moetzet Chachmei HaTorah of Shas issued a proclamation expressing their horror at the attempt of the reform, “destroyers of Judaism” to “dig their claws into the Kosel” to bring their “foolish ceremonies” into “the pure mikvaos of Eretz Yisrael.”

The Sages said that in reply to Shas chairman Rabbi Aryeh Deri’s request for their guidance, they instructed him to do all possible to keep the reform from achieving their aims.

On Thursday, the 16-member Rabbinical Council of the Chief Rabbinate addressed the recent announcement by the government to dedicate a special area at the Kosel for heterodox groups. The Chief Rabbis called on the government to freeze implementation of the agreement until the Rabbinical body has had an opportunity to formally review the plan and have its rightful say.

In the course of the protest, the Chief Rabbis blamed the reform leaders for “uprooting Judaism” and causing assimilation and intermarriage, and said they had “no connection” to authentic Judaism.

“Giving a foothold at the Kosel to those who in years past uprooted Zion and Yerushalayim from their prayer books, and declare in committee that all people are Israel, do not see the uniqueness of the Torah and do not believe in the foundations of the Jewish faith, which says that there will be no replacement to it, is extremely severe,” said the Council.