Hikind Fires Back at Rockland Democrats 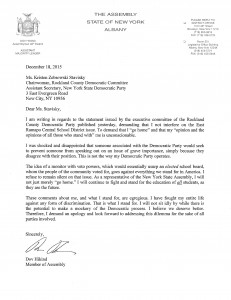 Assemblyman Dov Hikind (D-Brooklyn) released a letter Friday demanding an apology from the executive committee of the Rockland County Democratic Party’s calling for the Assemblyman to “go home” regarding Thursday’s press conference on the East Ramapo Central School District.

“I was shocked and disappointed that someone associated with the Democratic Party would seek to prevent someone from speaking out on an issue of grave importance, simply because they disagree with their position. This is not the way my Democratic Party operates,” Hikind said.

He added, “I have fought my entire life against any form of discrimination. That is what I stand for. I will not sit idly by while there is a potential to make a mockery of the democratic process.”

“The idea of a monitor with veto powers, which would essentially usurp an elected school board, whom the people of the community voted for, goes against everything we stand for in America. I will continue to fight and stand for the education of all students, as they are the future,” said Assemblyman Hikind.

The report, titled, “Opportunity Deferred: A Report on the East Ramapo Central School District” was authored by Dennis M. Walcott, the former Chancellor of New York City schools, Dr. Monica George-Fields, and Dr. John W. Sipple, who were appointed to a three-member panel by the Board of Regents. The report recommends 19 proposals such as pursuing legislative action that would give the monitors increased authority, including veto power over the elected school board. “If you allow an appointed monitor to veto decisions of the duly elected East Ramapo School District, then other appointed monitors can do the same in other districts. Where will it end?” Hikind said.