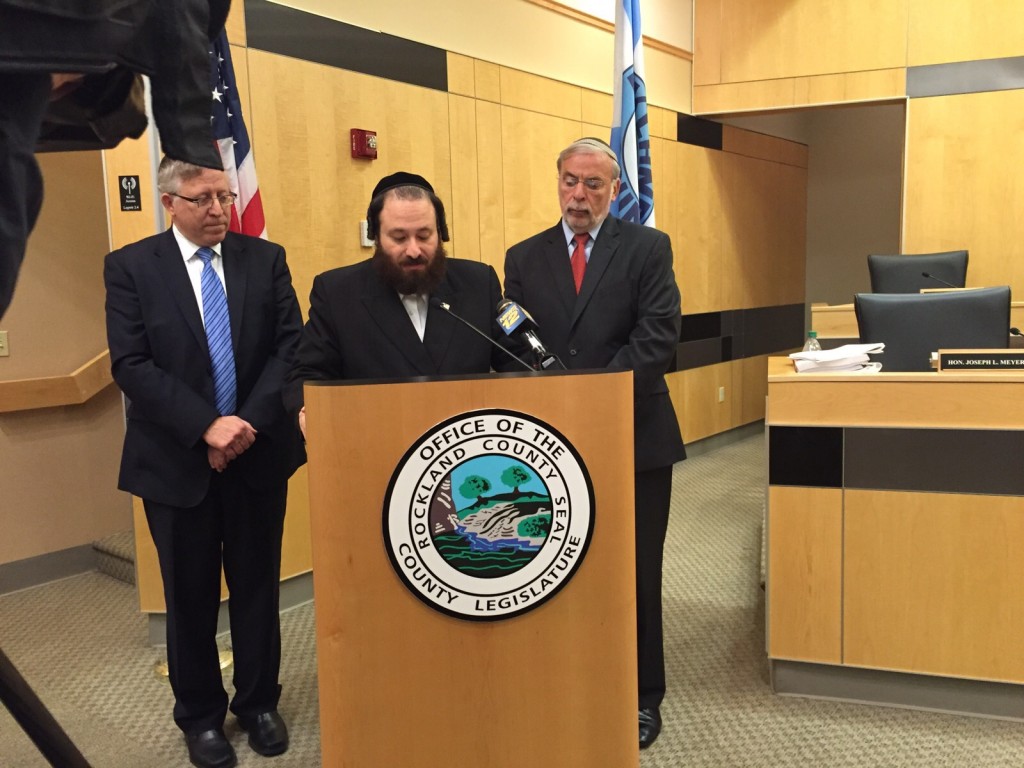 In a dramatic reaction to the call for state intrusion in Monsey yeshivah funding, Aron Wieder announced at a news conference Thursday afternoon that he was resigning his post as the Rockland County Legislature’s Democratic leader.

The resignation, announced before dozens of elected officials and community leaders in the Rockland County legislative chamber, came three days after the New York State Board of Regents unanimously voted to approve a panel’s recommendation that the state appoint a monitor over the East Ramapo school board, with power to override decisions made by the popularly elected board.

Flanked by Assemblyman Dov Hikind and Agudath Israel COO Rabbi Yosef Chaim Golding, Wieder said that his move should not be seen as a protest but as an attempt to remove himself as a distraction in the battle for the school board’s independence.

“A short while ago, I submitted [my resignation] to the president of the legislature,” Wieder said at the press conference held in Rockland’s legislature building.

“The reason I took the drastic step to resign was because some have turned my position as majority leader and strong advocacy to protect the constitutional rights and the civil liberties of the Orthodox Jewish community here in Rockland County into a distraction for the work of the county legislature and the Democratic caucus,” Wieder said. “Therefore, I have stepped aside to put those concerns ahead of my own.”

Wieder was referring to county executive Ed Day, a Republican who has been a persistent antagonist of his county’s yeshivah community. Hours before Wieder’s announcement, Day taunted the local Democratic party for allowing Wieder to speak for both them and the East Ramapo school board.

“The Rockland County Democratic Committee either stands with ALL the children of East Ramapo or you do not,” he posted on social media. “…As long as THEIR legislative majority leader is fighting what every clear thinking individual sees must happen, their words are meaningless.”

On Monday, in a report rejected by local yeshivos and national Jewish movements as biased, a panel appointed by the state Education Department issued 19 recommendations for the district, which covers an estimated 24,000 yeshivah students in Monsey, Spring Valley and New Square.

The most significant recommendations call for the state legislature to authorize a veto-empowered monitor, oversee local elections, and institute an affirmative action requirement for at least three public school parents to serve on the 24-member school board.

Both Rabbi Golding, who lives in the East Ramapo school district, and Hikind, a Brooklyn Democrat, denounced the measures as discriminatory and undemocratic.

“This recommendation is misguided and highly offensive to me, a resident of East Ramapo, and to my entire community,” Rabbi Golding said.

He cited Rabbi Chaim Dovid Zwiebel, Agudath Israel’s executive vice president, that “There is no other school district in New York where a duly elected school board, voted into office by a majority of the district’s voters, may have its decisions overridden by a state-appointed monitor.”

Hikind said that “we got stabbed in the back” by the report, whose authors received full cooperation from the school board.

“A lot of the animosity, some call it anti-Semitism, is coming only from one side,” he said, adding that he feels that the results of the report were “preordained.”

The legislature is due to rearrange leadership seats at the beginning of the new session, which begins in two weeks. But Wieder said that the resignation takes effect immediately.