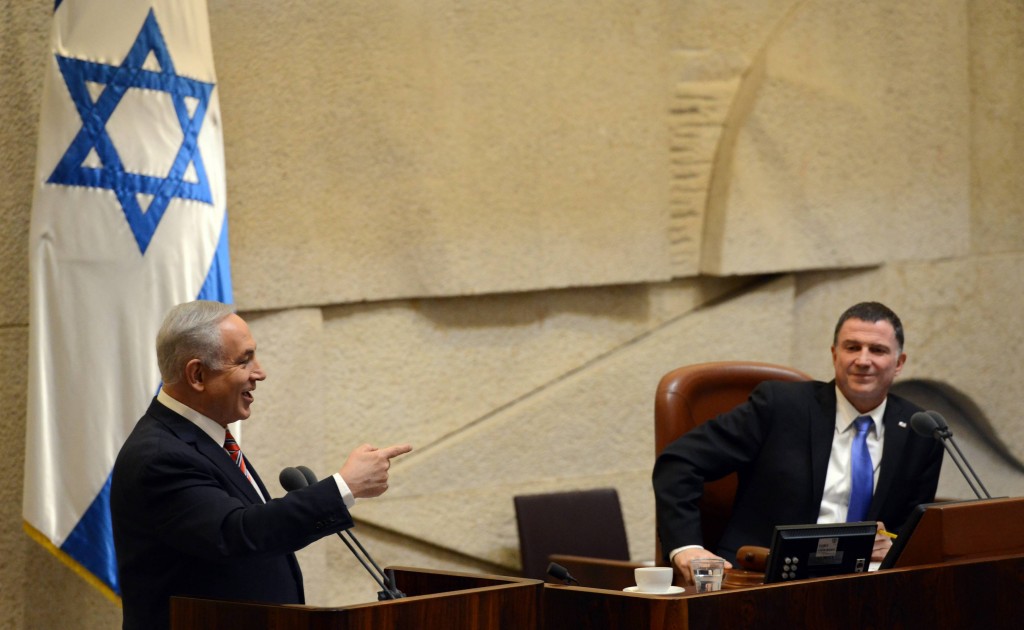 The Knesset plenum was the scene of a raucous confrontation between the coalition and opposition parties on Wednesday, ignited by the ongoing media tumult over President Reuven Rivlin’s decision to participate in a conference together with Breaking the Silence, a group of former soldiers harshly critical of the IDF.

To the cheers of their supporters and the jeers of their opponents, Israeli Prime Minister Binyamin Netanyahu and opposition leader Isaac Herzog took turns at the podium excoriating each other for their positions vis-à-vis Rivlin and the ex-soldiers.

“Leader of the opposition, I implore you to come before the Knesset and give a full-throated condemnation of Breaking the Silence – the organization that is leading a campaign of delegitimization against Israel,” the premier said.

Netanyahu yielded the podium to Herzog, who demanded that Netanyahu speak up for Rivlin.

The uproar in the hall was such that Knesset Speaker Yuli Edelstein stopped the discussion for five minutes by turning off the microphone while Herzog was speaking.

Edelstein reprimanded the MK’s for their behavior. “We had here clapping from one side of the plenum after the prime minister’s comments – I let it go because I thought it was temporary. But afterward, the clapping started from the other side of the plenum. I had to stop it, and I apologize to the opposition chairman.” He invited Herzog to the podium once again to finish his comments.

The incident came a day after Defense Minister Moshe Yaalon issued an order to ban members of Breaking the Silence from entering IDF bases. Shortly thereafter, Education Minister Naftali Bennett said that speakers from the group would not be allowed to appear in the schools.

Parents of fallen soldiers sent a letter to Yaalon on Tuesday urging him to work to outlaw the group.

Since its founding in 2004, the former Israeli soldiers have collected testimony from more than 1,000 veterans who allege improper or illegal behavior against Palestinians.

“In recent days, it was publicized that Israeli organizations, funded by foreign governments, are behind the persecution of IDF soldiers. While they are fighting the enemy – these organizations do everything they can to collect testimony against them, to put fear in their hearts, to turn them into ‘war criminals,'” the parents say in their letter.

“The director of Breaking the Silence was interviewed today and said that ‘our money comes from Switzerland, Denmark, Sweden and the Netherlands and is being managed in Ramallah.’

“This is a statement that should shake the State of Israel to its very core. Can it be that our children are exposed to harm from organizations that are run from Ramallah?” the parents continued.

The exchanges over Breaking the Silence took place during a session that was officially devoted to the problem of poverty in Israel, which has been highlighted in recent days by fresh data which elicited criticism of government inaction.

Responding to the critics, the prime minister told the plenum: “Poverty is bitter and hard. You have set an agenda raising the question of when the war on poverty will begin. I have news for you. Where my term as prime minister since 2009 is concerned, this war started a long time ago,” Netanyahu said.

Netanyahu adduced statistics which he claimed show that the two main poverty indicators—the proportion of families below the poverty line and the inequality index—have mainly declined since 2009.

Earlier in the week, Herzog called for a panel of inquiry into the government’s failure to ameliorate poverty in the country.