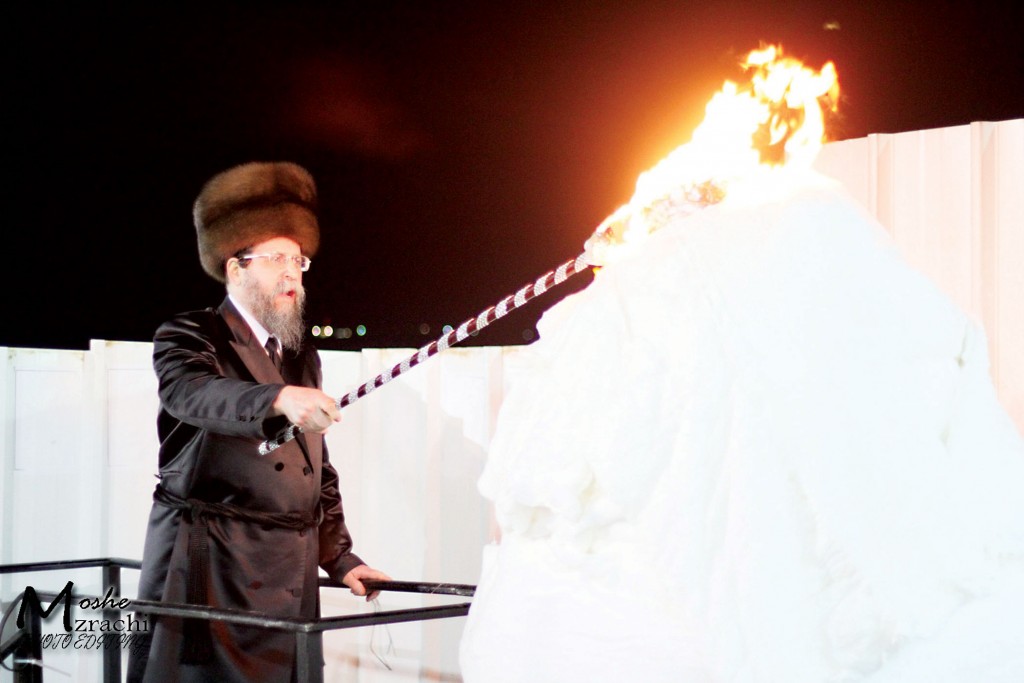 The Boyaner Rebbe, shlita, lit the central bonfire at the kever of Rabi Shimon bar Yochai at 8:30 p.m. on Wednesday, Lag BaOmer, in Meron, thus continuing a tradition that began when the Rebbe’s ancestor, the Ruzhiner Rebbe, zy”a, purchased the right of this hadlakah .

As he did so, and as the flames reached heavenwards, the immense throng — thousands upon  housands in the central compound, on the ground, in the courtyard, on bleachers, and on the roads leading to Meron — rose up and down in jubilant dance and in songs of praise forRabi Shimon, the holy Tanna.

Hamodia spoke with some participants who shared their experiences and perspectives with us:

Shmuel A., a yeshivah student from Queens studying in Israel, described his deeply emotional experience at the kever of Rabi Shimon bar Yochai on his first visit there on Lag BaOmer.

“It was interesting, trying to get into the kever, along with thousands of others who somehow had the same idea,” he said with a smile. “A balagan.”

“As I was squeezing my way in, I saw all the people, lots of Sephardim and Chassidim, but all kinds of Jews. Some people really came prepared, camping out, in tents, some with full kitchens!

“The chalakos were impressive. To see the kids’ faces just shining! Such temimus, such purity and innocence! It was very special.

“Finally, I managed to make my way to the kever itself. It was a sea of people, and you just had to ride the waves moving forward, inward.”

When asked if the crush of the huge crowd frightened him, Shmuel said that, yes, “when it became too much and seemed like it might be getting dangerous, I moved to the outside. But a little while later I tried again, and got inside safely.

“Most people stay very briefly because of the press of the crowd, but I was able to find a niche in the corner where there was a bit of space. I davened there for a while, and I was able to put my hand on the kever itself.

“When I came out again, it was the most amazing feeling — I felt as if I had been in a mikveh. Everything was very vivid. Then I broke down and cried.”

After that, he said, he came back down to earth — “and free food…”

Reb Tuvia Lieberman, a Yerushalmi from birth who hasn’t missed Lag BaOmer in Meron since his very own chalakah over 30 years ago, still gets emotional when standing at the sidelines of the Boyaner Rebbe’s hadlakah as the Chassidim sing a soul-stirring niggun, and then tens of thousands break out in song, “Lichvod haTanna haElokai, Rabi Shimon bar Yochai.”

“Every year anew I travel to Meron, usually a day before Lag BaOmer, staying the entire time close to the tziyun.

“Obviously, this place is a makom kadosh the entire year, but there is Meron, the Rashbi, during the year, and there is Meron on Lag BaOmer. One needs to be here to understand what I mean. Perhaps it is so ingrained in our blood that we just can’t imagine Lag BaOmer without coming to Meron, but nevertheless to me it isn’t just a tradition that needs to be done, it gives me much chizuk and hisorerus. Try explaining the non-stop dancing in the chatzer contrasted with the heartfelt tefillos inside the tziyun.

“To be here is to feel a part of Klal Yisrael; here there are no boundaries, no divisions, we all stand next to each other at the hadlakah, at the tziyun, and hold hands in a large circle dancing.

“No wonder hundreds of thousands come here every year, from all over the world.

Mrs. Esther Klein, originally from the UK who now lives in Tsefas, goes every year to Meron on Lag BaOmer with her family. Even when they lived in Yerushalayim they would travel north for a day that she describes as “an important part of our lives.’

What does she look forward to, in particular?

She mentioned the upsherens for her boys. But what stands out most for her, she says, is “a very beautiful moment in the morning. You know, there’s a lot of noise there all night, people singing and dancing, music, and so on. But just as the day dawns, it all stops, and there is suddenly absolute quiet, because it’s time for Shacharis.”

There have been difficulties, too, but even those were softened by the abundant chessed that is so much a part of the event. Like when the public transportation system collapsed and they had to walk home.

“We thought we might have to walk all the way from Meron to Tzefas [a distance of several miles, more than a two-hour trek, much more with small children],” she said, “but along the way we managed to get a ride with somebody.”

Robbie Wertseki came from Montreal just to be at Meron for the celebration. “We have had a connection to the Boyaner Rebbe for many years. I was a talmid of his father, z”l. We feel close to him, and in his honor, in the honor of the day, we came. It’s a long way, but it’s worth it. It’s worth it,” he told Arutz Sheva.

What makes the experience so special? “It’s our feeling of connectedness with our holy land, our holy people, you, me, all of us,” he explains.

Planning and preparation for the event began months before. “As part of the process of employing the lessons learned in previous years we worked to improve a number of areas, with an emphasis on public security and preserving public order,” the police said.

The improvements included “opening an additional emergency route by the Meron stream on the eastern side, increasing the sites for women by building new stands, using large viewing screens to present the lighting ceremonies to prevent overcrowding, and other actions.”

Thousands of police officers from the northern district were deployed to keep order under the direction of Northern District Commander Maj. Gen. Zohar Dvir.

To help them, a traffic branch of the police, Border Patrol, and advanced technology — including a zeppelin and helicopters for a live video feed to monitor the events from the air — were set for Wednesday night.

The fire department, Magen David Adom (MDA), IDF Homefront Command and the governmental authority tasked with maintaining holy sites were all on hand, as well.

Chaim Rabinowitz, a spokesman for Chassidei Boyan, explained the problem of crowds growing from year to year, from thousands to tens of thousands, and now hundreds of thousands. “The problem is, that someone who comes here once on Lab BaOmer, he can’t hold back from  coming again the next year, so every year it gets bigger.”

This, of course, poses a challenge to the organizers, the police, emergency units and everyone else involved, to accommodate the great throng of Yidden in a place that, b’derech hateva, is far too small, yet does somehow accommodate all who come.