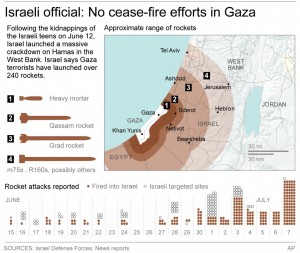 Matters are heating up in the conflict on Israel’s southern border against Hamas and other terrorist groups.

For the first time since Operation Tzuk Eitan (Protective Edge) began less than 48 hours ago, terrorists in northern Gaza launched four M-75 long-range missiles toward the suburbs of Yerushalayim and the city of Beit Shemesh. Almost all the missiles fell and exploded in open areas; one of them caused minor damage to a home. The missile that was fired over the Dan Region in the afternoon yesterday was intercepted by the Iron Dome anti-missile system over the city of Rishon Letzion. B’chasdei Shamayim, there were no injuries, but there was some property damage from missile pieces that fell after it broke up in the air.

Millions of Israeli residents, including those in Yerushalayim, Beit Shemesh, the Dan Region and other cities, received a warning of about 90 seconds before the missiles reached their region via the wailing of sirens, which sowed panic among the masses and sent them scurrying into reinforced rooms and bomb shelters.

According to the terrorists, the target of the missile fired at Tel Aviv was not the city itself, but rather Ben Gurion Airport in Lod. It was one of more than 35 missiles, out of a total of 150 that were fired yesterday toward Israel, that were intercepted by Iron Dome. The Iron Dome battery in the Dan Region is located in southern Tel Aviv, and many were able to see the missile being intercepted in the skies above them.

Four missiles fired toward Beit Shemesh and Yerushalayim fell and exploded in open areas. Civilians reported seeing them falling in Gush Etzion, but the explostions were heard in the southern neighborhoods of Yerushalayim and the city center.

One missile fell in the Mateh Yehudah regional council, near Beit Shemesh, and one near Givat Zeev, all outside of the actual Yerushalayim city limits.

Hamas also boasted that it has fired a missile at “occupied Haifa.” Towards midnight the remnants of the missile were found in the city of Chadera, 110 kilometers from the northern edge of Gaza. That is the northernmost location for a rocket to have landed from the Gaza Strip.

Hamas sees yesterday’s events as an “achievement” as it succeeded in putting more than two thirds of the country under the threat of its missiles.

Two hours before the sirens wailed in the center of the country, Defense Minister Moshe Yaalon said to reporters that “the defense establishment has no doubt that Hamas missiles will reach the Dan Region, and perhaps even more northwards, and to other areas in Israel.” The Home Front Command ordered all the bomb shelters in Yerushalayim to be opened, and in Gush Dan places with large crowds were cleared out.

“We began to attack from the air,” Yaalon emphasized, “and we will continue to attack as necessary. In the hours that pass, Hamas is losing. In the past few days there was an uncertain assessment that Hamas wanted to stop the fire, but the facts on the ground indicate otherwise. All Hamas members are targets. I spoke to the brigade commanders who will be first to enter, if we decide [to launch a ground operation.] I told the mayors of the Dan Region that they have to take into account possible missile fire on their cities.”

The security cabinet approved yesterday morning a call-up of 40,000 reserve soldiers, who can take the places of regular soldiers along the borders, and those regular soldiers will be transferred to the Gaza Strip in the event that a ground operation is launched. The call-up began yesterday and they are en route to their posts; soldiers are expected to arrive in the Gaza region during the day today.

The decision whether to launch a ground operation has not yet been made, and the security cabinet met again last night with the army chiefs to discuss the developments, and to address the question of what the goals of this operation are. Ministers were given reports of intervention by international entities such as Egypt, Turkey, America and the Europeans, who are trying to broker a ceasefire, to date unsuccessfully.

In the first 24 hours of Operation Protective Edge, the name given to the IDF operation, more than 200 air strikes were carried out. IDF aircraft struck more than 100 missiles that were hidden underground and destroyed 15 tunnels. Iron Dome batteries intercepted about 35 missiles, and the rest fell in open areas, causing minimal damage. In addition to Yerushalayim and the Dan region, missiles fell throughout the Gaza Envelope region, Ashdod, Ashkelon, Gedera, Be’er Sheva and other locations.

In the last few hours before midnight, the missile fire intensified, and salvos of dozens of missiles were fired toward the southern and central regions. Although sirens were also heard in Caesarea, Netanya and Zichron Yaakov, the Home Front Command said they were false alarms.

IDF Spokesman General Motty Almoz noted that “we expected the barrage, which came as the result of extensive operations against Hamas, which was significantly damaged in the last few hours by the air strikes.”

The spokesman, in a message to the public, said that “against terror, we have to fight with patience and forbearance. We are
taking into account the current salvo, and the Home Front Command is deployed on all fronts, in all the relevant areas. People should obey Home Front Command instructions, as they save lives.”

Almoz also said that the “Navy and air force conducted some 200 strikes on terror infrastructure, weapons storehouses and tunnels. The operation is expanding.”

Toward midnight, Israeli air strikes increased and the IDF will continue along this vein over the next few days. “As the IDF was instructed, the operation will be expanded in accordance with the plan. Residents of the south, who are in a very complicated situation, will get the quiet that the IDF will attain,” Almoz said, and added that “we are determined to deal with Hamas in a targeted fashion.” Addressing the importance of national fortitude he said “the public needs to be patient. Likewise, they should obey Home Front Command orders.”

Chief of General Staff General Benny Gantz visited the Gaza brigade to approve an operative plan and said that “Hamas chose this escalation, and other organizations joined. We will exercise all our power, and it will take as long as it has to until we win. We need to be prepared for all the possibilities, to be determined, coolheaded and to continue with our goal as much as reality allows us. We will deal Hamas a major blow and negate its abilities against us. We will exact the price of Hamas’ strategic mistake.

The IDF continued bombarding Gaza into the night. In one sortie, the IDF bombed the house of Khatam Mohammed Abdel Rahman Gouda, a veteran Hamas operative in Rafiach. His house served as an operations’ center of the organization. The home of Mohammed Abu Shamla, the commander of the southern zone of Hamas in the Gaza Strip, was also bombed. Four other Hamas members’ homes sustained strikes; all were involved in missile fire. Launchers, including some concealed ones, were also destroyed, as were tunnels, training camps and weapons depots.

A defense official told Hamodia last night that the plan is going exactly they way the Chief of General Staff had planned it. “There are large teams working on planning the targets for coming days. The plans are all approved and then are carried out right away,” he said.

Reports from the Gaza Strip said that some 15 people were killed and 80 were wounded by the air strikes. Among others, two cells of terrorists, including one with the leader of Hamas’ naval commando, were killed.

Israel placed phone calls to the homes that it was about to bomb to warn residents and family members to flee before the aircraft appeared and began to strike. In some cases, where the calls did not go through, helicopters delivered small warning missiles to the area around the house so that people in the house should realize they are being targeted.

Still, despite all the warnings that preceded the strike on the home of Al Qarawa, a senior terrorist from Khan Younis, the Hamas terrorists hurried to gather a large number of women and children, with the assumption that this would deter Israel from action. But the house was hit anyway, and five civilians were killed, including 2 children, and 25 were wounded. The air force said it received information that the house was empty, and it is unclear what happened between the report and the moment of the strike, and how dozens of civilians ended up being there.

Senior Hamas terrorists threatened last night to take painful revenge for Israeli strikes, especially for the family on the roof of the house. But the defense establishment reiterated that Israeli action would continue this time until the goals are met.

This article appeared in print on page 6-8 of the July 9th, 2014 edition of Hamodia.