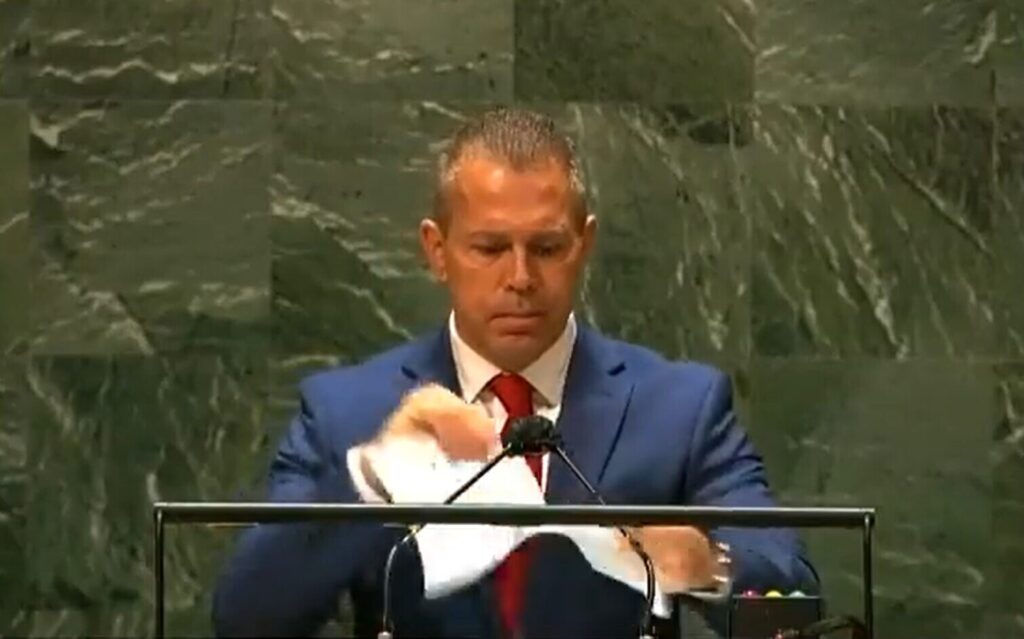 To demonstrate his contempt for U.N. Human Rights Council’s anti-Israel bias, Ambassador to the U.N. Gilad Erdan tore up a report by the UNHRC in front of the General Assembly.

“The voices of the victims of the terrible crimes against humanity that we have already seen in the first decades of this century cannot be heard over the obsession of the so-called Human Rights Council with targeting Israel,” Erdan told the UNGA on Friday.

He noted that since the council began convening in 2006 it has issued 142 condemnations against member states, of which 95 were against Israel. Only 35 condemnations were produced against Syria and 10 against Iran.

Holding a copy of the report in his hand, Erdan said: “Its only place is in the dustbin of antisemitism, and that is exactly how we shall treat it,” and tore report into four pieces and walked away from the podium.

UNHRC President Nazhat Shameem, Fiji’s ambassador to the U.N. in Geneva, was in New York for the General Assembly debate, where she denied the charge of bias, though declined to explain the focus on Israel versus others.

On the issue of the inclusion of abuser states on the 47-member Human Rights Council, she said:

“There was no country in the world with a perfect human rights record.

“If we were to say that the UNHRC is only for countries that have no violations of human rights, I am not sure that we would be left with anyone at all.”