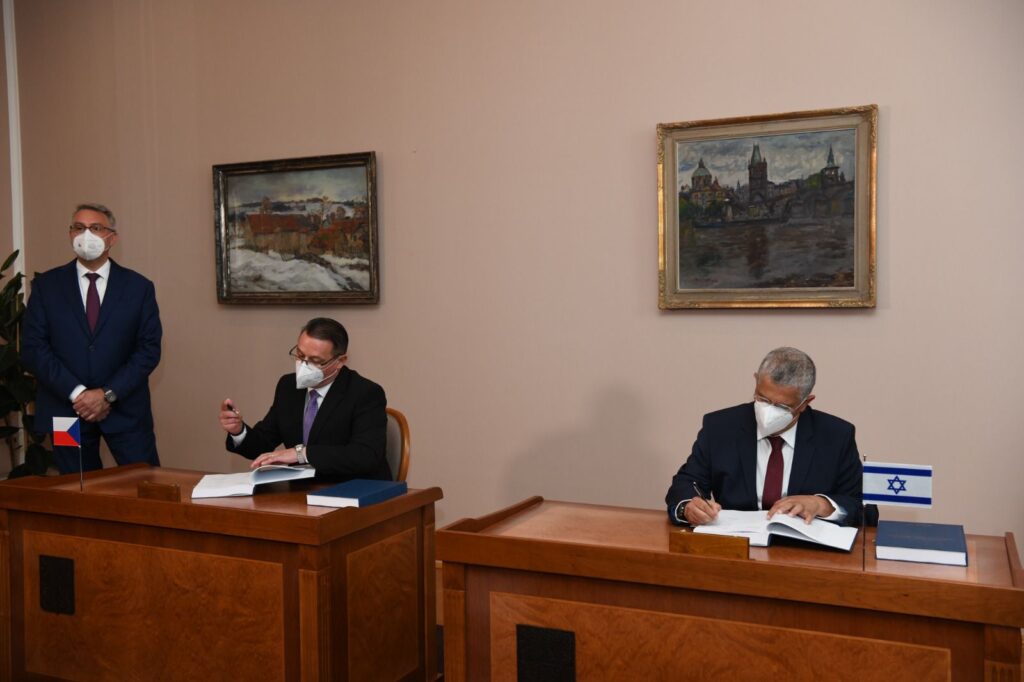 The Director General of the Defense Ministry, Maj. Gen. (Res.) Amir Eshel and Czech Deputy Minister for Armaments and Acquisition, Lubor Koudelka, signed a GTG (government-to-government) agreement in the Czech Republic on Tuesday, to deliver 4 RAFAEL-produced air defense systems to the Czech Ministry of Defense. The agreement was signed under the guidance of Sibat, the ImoD’s International Defense Cooperation Directorate, and amounts to approximately NIS 2 billion ($520 million).

A celebratory ceremony was held in Prague, during which the Israeli and Czech Ministries of Defense signed the agreement. It is the biggest agreement signed between the countries to date. As part of the agreement led by SIBAT, the Czech Republic will be equipped with 4 RAFAEL SPYDER batteries, which include MMR radars produced by IAI.

The agreement amounts to approximately NIS 2 billion ($520 million) and includes the involvement of Czech defense industries. SPYDER is an air defense system based on RAFAEL’s Python and Derby air-to-air missiles and is designed to intercept a variety of airborne threats including planes, helicopters and UAVs. These will be integrated into the NATO country’s infrastructure and will defend Czech skies. Czech industries will also be involved in the process outlined in the agreement.

At the press conference that took place following the signing of the agreement, ImoD Director General Maj. Gen. (Res.) Amir Eshel said: “The Czech Republic has always been an esteemed ally of Israel, and we will always remember the unconditional support that we received from the Czech Republic during the establishment of the state. The agreement that we signed today is yet another milestone in the strategic cooperation between our two countries and also reflects the visions of both Ministers Gantz and Metnar to further develop cooperation between Israeli and Czech industries. This is the first time that Israel will deliver a full air defense system to a NATO country, and we are proud and thrilled that the Czech Republic is the one. RAFAEL’s system represents the excellent capabilities of Israeli defense industries, which are leaders in the global defense market.”

Czech Minister of Defense, Lubomir Metnar: “I highly appreciate the willingness of the Israeli Government to share one of its most advanced defense systems with us. It will push our armed forces to the 21st century in the air defense domain. I believe that it is a milestone in our long-term strategic partnership that will help to further it.”