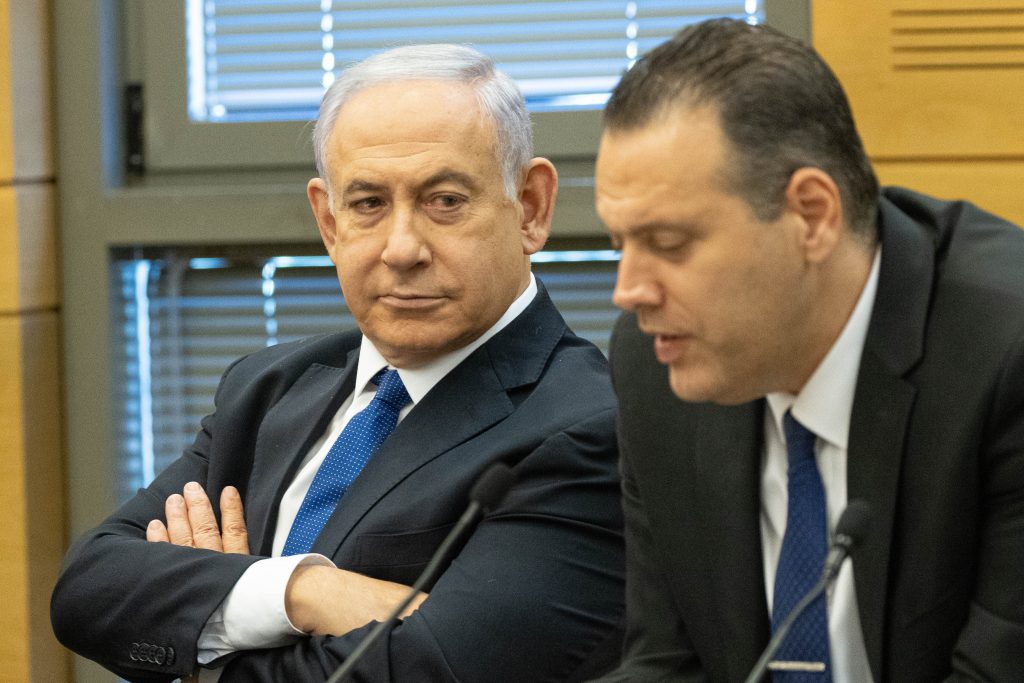 Former coalition partners Binyamin Netanyahu and Benny Gantz stepped into a partisan brawl on Thursday as coalition and opposition MKs sparred over extension of the law that bars Palestinians who marry Israeli citizens from receiving Israeli citizenship.

Defense Minister Gantz appealed to opposition leader Netanyahu for his help in passing the extension:

“This bill is necessary to maintain the security of the state, and Jewish democratic character, so security considerations must be put above politics,” he wrote, referring to the concern that if the bar expired Palestinian terrorists could use marriage ties to infiltrate Israeli society.

“They gave up on acting in the national and state interest and we’re supposed to cover for them? They established a coalition with Ra’am and now they’re saying, ‘Save us from this coalition.’ Excuse me? What is that?” asked Netanyahu indignantly.

The coalition has turned to right-wing opposition for support because the Islamist Ra’am party (United Arab List), though a coalition member, will not vote for it. Critics of the law say it is racist.

Ra’am isn’t the only coalition party that has a problem with the issue. Meretz MK Mossy Raz said that some MKs in Meretz were thinking of voting against it.

Meretz faction chairwoman Michal Rozin said that if the party was in the opposition, all Meretz MKs would vote against it, but because it is in the coalition, the party must handle the matter sensitively.

“We don’t intend to topple a government or harm the coalition,” Rozin said. “We are working to find a fair solution,” according to The Jerusalem Post.

Earlier in the day, Likud MK Fateen Mulla said that he would vote against extending the bill. Despite Likud being principally in favor of the legislation, party MKs have indicated they won’t support it because it originates from the coalition government. “We will oppose the law,” said Mulla, “we came to fight against this government until it topples.”

Communications Minister Yoaz Hendel of New Hope said that Likud’s approach shows it is “showing Bibi-ism over the good of the country and taking an anti-Zionist step.” Hendel told Yediot that “anyone who gives up on the security of the state and puts its leader above Israel’s security — has a problem.”

The government failed in its efforts on Wednesday to extend the law.

Coalition chairman Idit Silman (Yamina) was forced to pull the measure from the Knesset Arrangements Committee agenda upon realizing that she did not have enough votes for it to pass. While the opposition parties, the Likud and Religious Zionism, support extending the law, they decided to embarrass the coalition by announcing ahead of time that they would not back the measure.

Mocking the apparent early paralysis of the government, Zohar wrote that it “is simply unable to maintain the State of Israel as a Jewish and democratic state.”

Interior Minister Ayelet Shaked (Yamina) pledged to move forward with the legislation, saying it would be brought for a vote next week.

“I do not imagine that the opposition will harm the security of the country in the name of political games,” she tweeted. “I have no doubt that the head of the opposition [Binyamin Netanyahu] will keep his word that on matters of Israeli security ‘there is no opposition and no coalition. On these matters, we are all a united front.’”

Kan News reported that the government was working on a compromise with Ra’am in which it would present the party with a series of reforms to the law, in a bid to get its members to abstain.