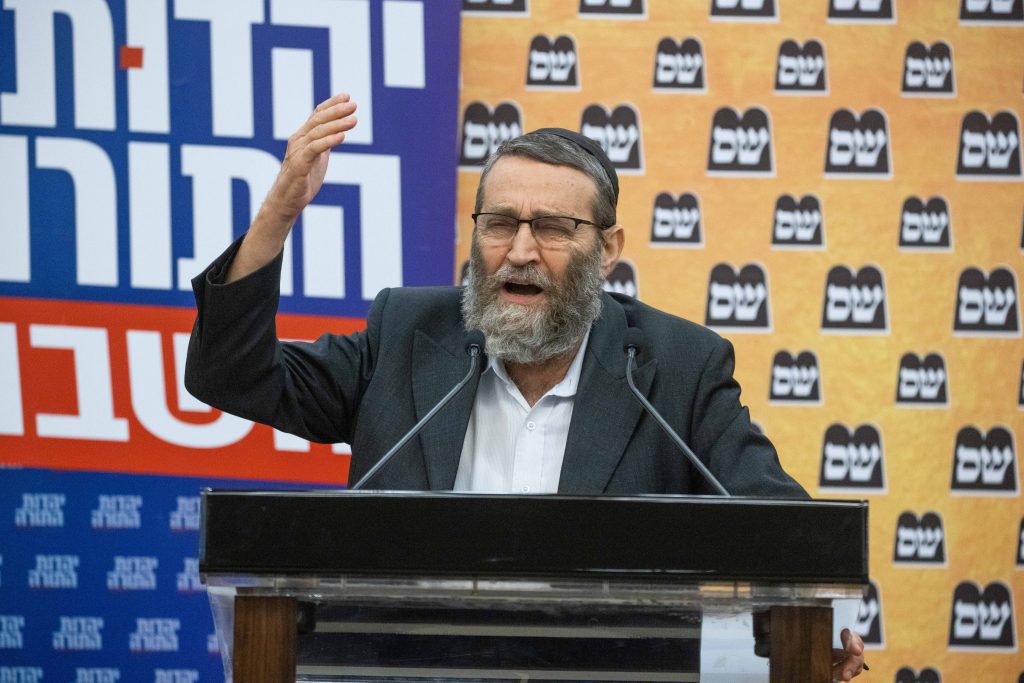 At the Knesset, United Torah Judaism leader Rabbi Moshe Gafni on Sunday challenged the incoming ministers, as he quoted Hagaon Harav Shach, zt”l, who famously asked the non-observant public at the founding convention of Degel HaTorah:

“In what way are you Jewish?”

“In what way is this state Jewish?” Rabbi Gafni asked, referring to the coalition agreement in the Knesset plenum. “There’s nothing here. No Shabbat, no kashrut, no conversions. Nothing. It’s all gone.”

UTJ MK Rabbi Yaakov Litzman told the plenum: “This is the first time that we are seeing the swearing-in of a government in Israel that has no public support, without having won an election. It’s an aggregation of lies, deceptions, an alliance of those who hate Netanyahu and have come together to take vengeance upon him, without any ideology or values in common.

“This Bennett-Lapid-Liberman government has declared war on all that is holy…It has given the finance ministry over to that persecutor of religion Avigdor Liberman. What Naftali Bennett thinks of Liberman I know better than others. I’m not going to quote from our private conversations. All I can say is that Liberman is the last one he would let run a bank or a shop.”

Rabbi Litzman noted that although the coalition parties had in the coalition agreement simply omitted issues that they could not agree upon because of their vast ideological differences, they were able to agree on one thing: the uprooting of every trace of Jewishness and the Jewish character of the state.

“In every coalition that has included United Torah Judaism we have been accused of being parasites, robbers of the national coffers for our personal use. And now comes Mansour Abbas, and shows everyone how to received multi-billion shekel budgets—not just a few million for the basic budgets of Chinuch Atzmai and the yeshivos. And it’s all right. Only for the chareidim is it forbidden.

“Those journalists who for years have depicted the chareidim as parasites, I call on you to apologize!”

Rabbi Litzman concluded by confirming that UTJ and Shas “unhesitatingly refused” the offers made to persuade them to go over to the Bennett-Lapid coalition. But “we stood by our principles and our promises to our constituents, to stay with Netanyahu and the right, and we have not had a moment’s regret.”

Shas MK Rabbi Michael Machlieli tore up a copy of the coalition agreement to conclude his remarks at the podium. “We will do everything we can to ensure that the conspirator from Ranaana [Naftali Bennett] be removed from office in shame.”

Meanwhile, a prayer rally was being held at the Kosel to protest the new government. Hundreds were reported in attendance.

The tefillah was led by Rabbi Shmuel Eliyahu, Rav of Tzfas.