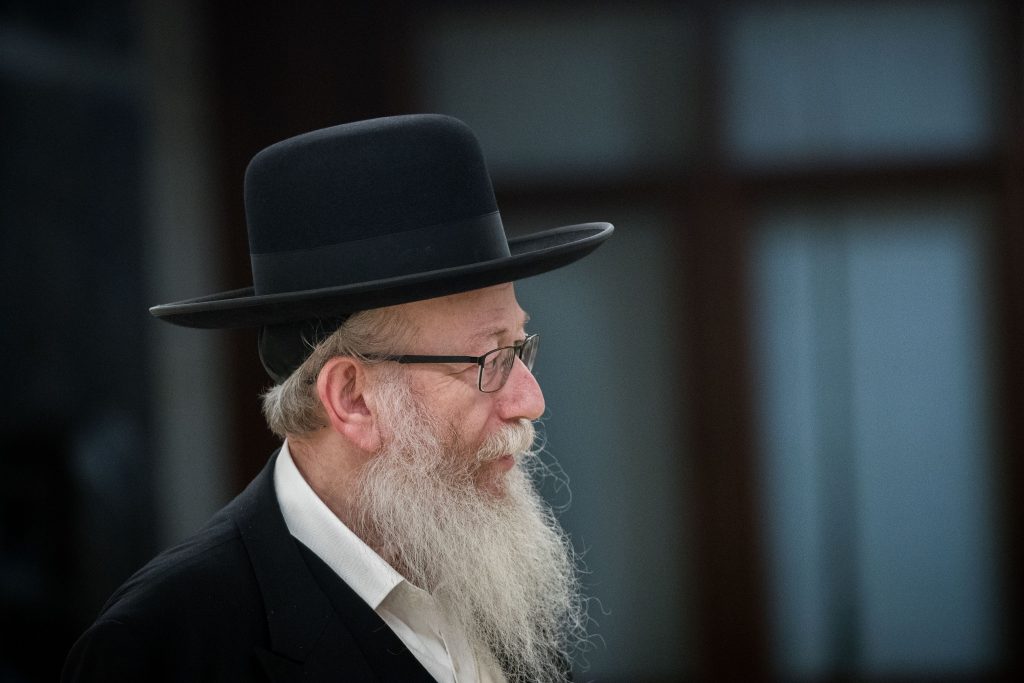 Housing and Construction Minister Rabbi Yaakov Litzman resigned Sunday from the Cabinet in opposition to a threatened government lockdown over the Yamim Nora’im.

Rabbi Litzman is not the only minister who opposes the imposition of the lockdown, but he is among the most vehement of its opponents.

In a letter to Prime Minister Binyamin Netanyahu announcing the move, Rabbi Litzman wrote: “For about a month now, while we have been dealing with the morbidity data in Israel, I warned repeatedly in the face of the intention in advance by Corona Czar Prof. Ronni Gamzu to impose a full closure on Rosh Hashanah and Yom Kippur, which will prevent hundreds of thousands of Jews from all sectors from praying in shul.

“This is a serious decision, one that will significantly dilute and reduce the number of people coming to shul on Rosh Hashanah and Yom Kippur, especially tens of thousands of Jews, from a variety of different populations, some for whom this is the only time during the year that they are accustomed to coming to shul.

“I repeated my warning and forcefully expressed opposition to a full closure specifically during the chagim in every forum, in the Coronavirus Cabinet, in government meetings, in talks with you and other cabinet members, and with the media. I emphasized that if a full closure is indeed needed, we should not wait with the increase in morbidity data at this rate, and that it should be decided upon then, a month ago, two weeks ago and not at the chagim.

“Prof. Gamzu constantly denied and explained to me that this was not his intention. Unfortunately, it was proven that I was right and that the decision to enforce the closure on the chagim was predetermined, amid unnecessary risk and an increase in morbidity over time. In addition, it became clear that the agreement over allowances in shuls was violated and that the decision to impose a full closure will not allow the shuls to operate over the chagim according to the outline, contrary to what is clearly agreed to between us. Therefore, I will not be able to continue as a minister and I decided to resign from the government and return to serve as an MK under the Norwegian law.

“I see as a significant violation of values the fact that the Yamim Tovim have become something that can be harmed, in advance, compared to other areas such as mass demonstrations, the vacation season in July-August, etc. It is unfortunate that the chagim closure was planned and marked in advance by the corona czar amid a lack of appreciation for the chagim,” Rabbi Litzman concluded.

“We will continue together, in the government and outside it, to fight the coronavirus for the health of the Israeli people,” he said in a statement in which he also expressed hope that Rabbi Litzman would return to the government.

The government must make a final decision on the issue before the prime minister leaves for Washington at 11 p.m. Sunday night to sign the agreement with the United Arab Emirates.

Health Minister Yuli Edelstein said on Motzoei Shabbos that there would be no relaxation of the lockdown for political reasons. “I signed the proposal that will be brought to the government and I say unequivocally – there will be no negotiations on the details.”

The proposed lockdown is expected to meet with opposition from several ministers, and it is expected that there will be efforts to water it down as much as possible.

“The proposal placed on the table is extreme and insane, and it will not pass as is,” several ministers told Channel 12. They added that the proposal “critically harms the economy, welfare and health.”

Economy Minister Amir Peretz (Labor) has announced that he intends to oppose the lockdown.

“I support a nightly curfew under which 80% of the economy can remain open,” he said. “Hundreds of thousands of employees and business owners are living in fear. The economic coronavirus plague is no less severe than the health plague. But if you place limits – then you compensate. I have turned to the prime minister demanding that a team be formed immediately to determine a plan for compensation which will be clear to everyone.”

Similarly, Tourism Minister Asaf Zamir argued Motzoei Shabbos that “a full closure of the entire country during the holidays is too extreme a step and has economic implications that entire industries will not recover from.”

He added that he will vote against the decision to impose the closure.

Education Minister Yoav Gallant is pushing back against just one aspect of the closure: shuttering schools this Wednesday as opposed to Friday, when the rest of the closure is expected to start.

“The education system and the students of Israel are our future and our advantage, they are not the cause of illness,” Gallant posted Sunday morning. “I will demand at the Cabinet meeting that studies be held through this coming Friday, in order to allow the students an educational continuum and their parents financial stability.”

Under the proposed plan, schools would close on Wednesday, other than special education. However, grades 5-12 would continue distance learning throughout the upcoming holiday period. Limits would be placed on the number of employees allowed to work in-office, and workplaces would be encouraged to allow as many employees as possible to work from home.

The lockdown will begin at 6 a.m. on Friday morning. In the first stage of the plan, movement will be limited to 500 meters around a person’s home, and all businesses will be closed, including stores, cultural and entertainment venues, tourism venues, and any business which handles customers face to face. Restaurants will be permitted to offer delivery or take-away only.