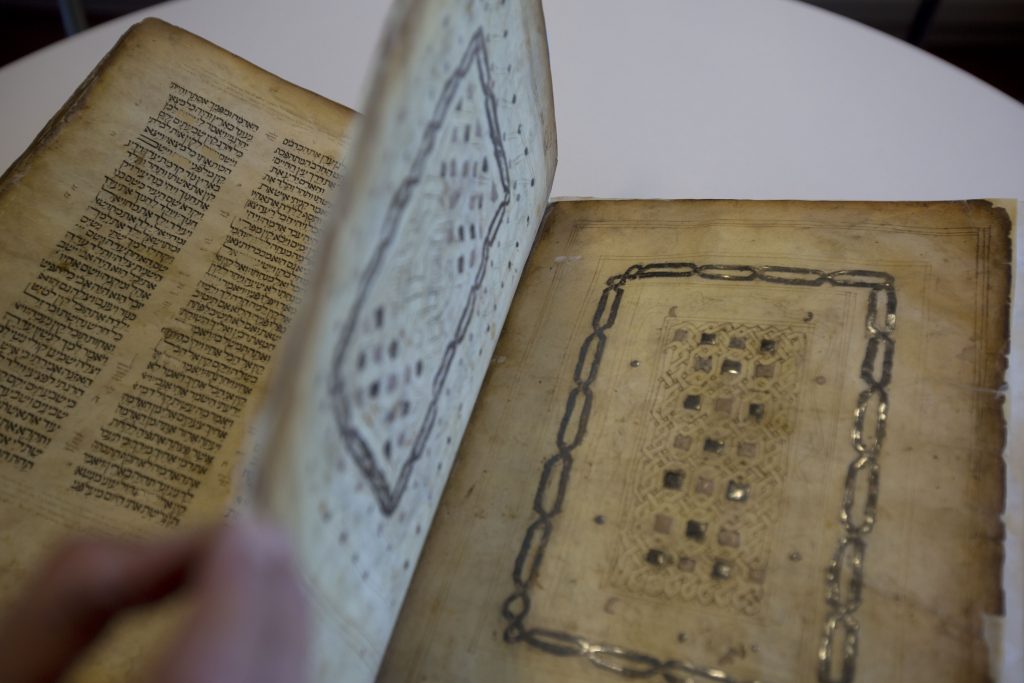 A quarter century after Israeli spies, a Canadian activist and a Syrian rabbi smuggled nine rare medieval Jewish manuscripts out of Damascus, an Israeli court decided the books will remain under the National Library’s custodianship for their preservation.

The decision ends a protracted legal battle over the ownership of the Damascus Crowns, illuminated Bibles written on parchment that belonged to the Syrian capital’s Jewish community for centuries until they were secreted to Israel in the 1990s.

The Jerusalem District Court ruled Monday the books were “treasures of the Jewish people” that had “historic, religious and national importance” and must be preserved. The best way to do so would be to keep them at the National Library under a public trust, it ruled.

“The trust and its conditions are aimed at ensuring first and foremost the preservation of the Damascus Crowns and their care for the public, the Jewish people and future generations,” the court said.

The manuscripts were originally transcribed in Europe in the 13th to 15th centuries before eventually migrating to Damascus. The Hebrew Chumashim, unlike traditional Torah scrolls, contain vowels, punctuation and other marks indicating correct pronunciation.

The elaborately decorated chumashim were highly treasured by the Damascene Jewish community and only taken out on rare occasions.

Most of Syria’s Jews fled the country following Israel’s creation in 1948. Those who remained suffered persecution and severely restricted freedom of movement that was only lifted in the 1990s. Only a handful remain after Syria’s decade-long civil war.

Israel’s Mossad intelligence agency worked with Canadian activist Judy Feld Carr and Rabbi Abraham Hamra, the Damascus Jewish community’s last leader, to sneak the Crowns out of Syria and bring them to Israel.

Many details of the operation remain undisclosed to the public. In an affidavit to the court, Feld Carr said that in 1993 she coordinated with Hamra to give one of the manuscripts to a Canadian diplomat, who slipped it out of Syria in a black plastic shopping bag.

The National Library, whose mission is to collect and preserve Jewish heritage and cultural objects, has held the Crowns since they arrived in Israel.

Hamra has long contended that Israeli officials promised the books would be returned to him so they could be housed in a cultural center dedicated to Syrian Jewry. He said he was granted a plot of land in a Tel Aviv suburb for the center. Decades later, construction has not started.

He sued the library for ownership of the Crowns, and the library counter-sued in 2014 and asked the court to place them in a public trust under the institution’s authority.

“I came only to fight for justice and integrity,” Hamra said ahead of the court’s decision.

The library’s appeal to the court reflects its concerns about the legal grounds for holding onto Jewish cultural heritage items smuggled out of other countries. Although Syria has not made a claim for the collection, many Western countries now face pressure to repatriate cultural property stolen from their countries of origin, such as Iraq.

On arrival in Israel, the manuscripts required restoration work to prevent further decay. They are kept in special climate-controlled conditions to preserve them, the library said in its arguments to the court.

Aviad Stollman, former head of collections at the National Library, said it offers the most secure place for the Damascus Crowns.

Few institutions have the resources or expertise to preserve the ancient books, he said. “It’s very expensive and very difficult for an independent institution to preserve” such documents.

The court determined the trustees will include members of the Syrian Jewish community in Israel, representatives from the National Library, the chief Sephardic rabbi of Israel and the president of Hebrew University, and Rabbi Hamra.

Meir Heller, the attorney representing the library, said the court’s ruling was a coup for the preservation of cultural heritage in Israel.

“We succeeded to save (the books) from a horrible place,” Heller said, adding that they now found a proper home.