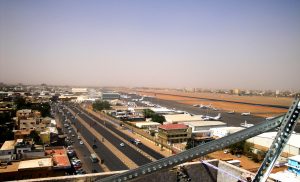 The Sudan foreign ministry said on Tuesday that the country is ready to follow the UAE in normalizing relations with Israel.

“There is no reason for the continuation of hostility between Sudan and Israel,” the foreign ministry spokesman was quoted as saying by The Jerusalem Post citing Sky News Arabia. “We do not deny the existence of contacts between the two countries.”
UAE’s decision to make peace with Israel was a “bold and courageous move that charts the right course for the rest of the Arab countries,” the spokesman said.
Prime Minister Netanyahu welcomed the statement:
“Israel, Sudan and the entire region will benefit from a peace agreement and together can build a better future for all peoples of the region. We’ll do everything needed to turn this vision into a reality.”
Netanyahu met with Lt.-Gen. Abdel Fatah Abdeirahman al-Burhan, who chairs the Sudanese Sovereignty Council, at a conference in Uganda in February.

Peace with Israel would likely finalize the country’s alienation from Iran in recent years.

Tehran gained access to Port Sudan on the Red Sea for its naval forces and Iranian ships have in the past transferred arms to Hamas in Gaza through Sudan and into Egypt.

However, the war in Yemen has brought about a change in Sudanese policy, which is now more aligned with Saudi Arabia.