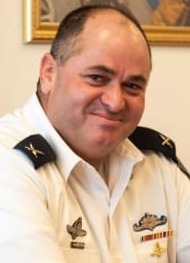 Hezbollah wants to attack Israel from the sea, and is developing capabilities that will allow it to do so in a future conflict, warns outgoing commander of the Israel Navy’s Haifa base, Brig. Gen. Gil Aginsky, who last week retired after 32 years of military service.

In an interview with Yisrael Hayom, Aginsky cited the tension on the northern border and the threats Hezbollah has been making, and said that the Israeli Navy was prepared to confront the challenges awaiting it, no matter how serious.

“The challenge we are grappling with is twofold – from the sea, and from under the sea. On the water, we know how to deal with any scenario, including some very complicated ones. When it comes to the underwater sphere, we are in the process of arming ourselves and dealing with a challenge that is unique to us,” Aginsky said.

“We’re talking about a ‘blue tunnel.’ You can blow up every terror tunnel under the Gaza Strip, but our tunnel is enormous. The basic assumption is that Hezbollah wants to infiltrate [Israel] via the sea. They aren’t there to grow flowers. They intend to prevent us from being here, and if they can execute that intention from the sea, they will.

“Our job is to prevent that. We are holding onto the northern border fast and covering the entire zone,” Aginsky said.

Israel is marking the 14th anniversary of the 2006 Second Lebanon War, during which terrorists fired a missile at the INS Hanit warship, which was on operation 16 kilometers (10 miles) off Beirut’s shores. Four Israeli sailors were killed.

Aginsky said that the IDF has learned its lesson.

“We are better prepared and I have absolute faith in our tools. The threat still exists, and it is significant, but we are looking to protect Israel’s gas rigs, above all else. If Hezbollah wants to cause strategic damage, it will try to attack the rigs, but if it hits a ship along the way, it won’t be sorry. In the end, the ship’s goal is to protect the rig,” he said.

“We are expanding our powers in terms of vessels, infrastructure, or personnel. Our operational readiness is a top priority, given the changing strategic reality around us, down to the microtactical level, which changes every day.”

In the next few years, the IDF will be receiving a number of new submarines and Sa’ar 6 warships, which Aginsky predicts will double the INF’s power. However, he says, the navy is currently carrying out secret missions.

“A few things we’ve done with submarines have brought Shayetet 13 [naval commando unit] to groundbreaking new places. The new submarines are very important, and the Sa’ar 6 ships are no less important to the Israel Navy. These tools are nothing less than amazing. I hope we won’t be challenged, but if we are, the enemy will find itself facing the ultimate response.”