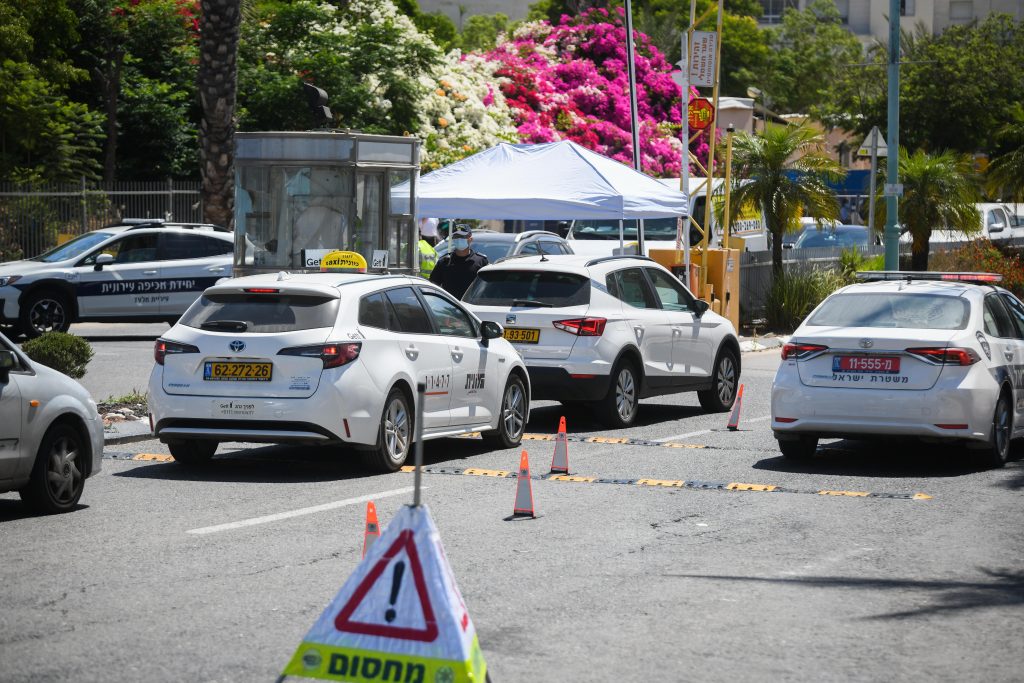 A partial lockdown on the chareidi city Elad and five neighborhoods in Teveria went into effect at 8 a.m. on Wednesday in a bid to slow the spread of the coronavirus.

Police said in a statement that gatherings of more than 50 people will not be permitted in those zones and that seven checkpoints were set up in and around Teveria.

Meanwhile, a military task force warned that infection rates were “very high” in chareidi communities in comparison to the rest of the country, with around 14% of all new infections this week diagnosed in just five locations.

The task force named the chareidi cities of Bnei Brak (70 new cases in the last three days), Modi’in Illit (14), Beitar Illit (19) and Beit Shemesh (7) as cities with concerning infection rates, as well as Yerushalayim (106) and Ashdod (54), along with Elad and the Teveria neighborhoods that were locked down.

In addition, the southern town of Rahat and Kfar Saba were both said to be showing fast rates of growth in the number of new coronavirus cases.

Prime Minister Binyamain Netanyahu said that ministers would discuss whether to declare other areas restricted zones on Wednesday morning.

Ministers were still debating whether to introduce restrictions in Bat Yam, amid a sharp rise of coronavirus infections there, according to a Channel 12 report. There are particular concerns about the town, which has a relatively older population in comparison with other outbreak areas. Sixteen new cases were reported in Bat Yam in the last day, with a total of 67 in the last week.

On Wednesday, Deputy Education Minister Rabbi Meir Porush (UTJ) attacked the decision to single out and impose a lockdown on chareidi neighborhoods in Elad and Teveria, with many other cities and neighborhoods with the same infection rate yet not put under lockdown.

“There are far more dangerous and sensitive infection areas in Israel than the city of Elad or the chareidi neighborhoods of Teveria, and despite this no lockdown has been imposed on them.

Former Defense Minister and Yamina Chairman Naftali Bennett said that when the government loses control of the coronavirus outbreak, they turn to place the blame on the chareidim. In an interview on Army Radio on Wednesday Bennet said that “They closed Elad and other chareidi neighborhoods and I can tell you, the chareidim are more disciplined [in the coronavirus regulations] than the rest of the population. I walk around Bnei Brak, Elad, Modi’in Illit and in Beitar Illit. The chareidi public is more careful than the general public about masks, distance in the supermarket.

“It is time that the government lets go of the chareidim; their public isn’t a scapegoat.”