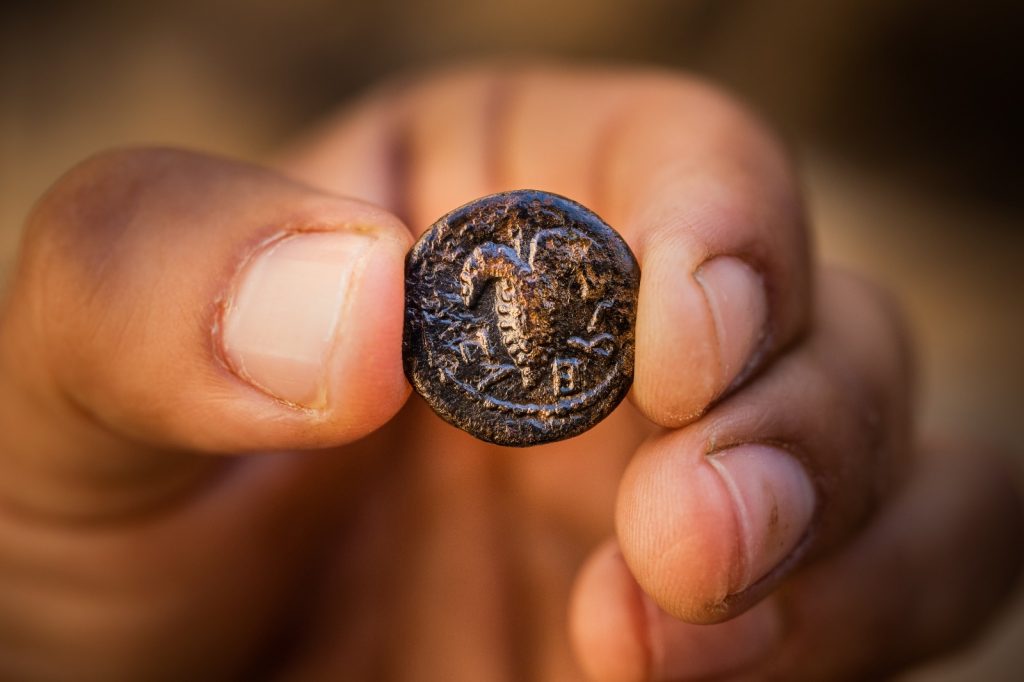 In honor of Lag BaOmer, the Israel Antiquities Authority on Monday revealed a rare bronze coin from the period of the Bar Kochba revolt, which was recently discovered in archaeological excavations of the Israel Antiquities Authority in the William Davidson Archaeological Park, under the supervision of the Company for the Reconstruction and Development of the Jewish Quarter in the Old City, located between Har HaBayis and the City of David.

Coins from the period of the Bar Kochba revolt, which declared the rebels’ purpose – to liberate Yerushalayim from Roman occupation after the destruction of the Beis Hamikdash and the city – are well-known in archaeology. Discovering such coins helps researchers map out the revolt, which took place approximately 1,900 years ago.

This is the only coin from the period of the Bar Kochba revolt bearing the name “Yerushalayim” ever discovered within the Old City of Yerushalayim.

It is interesting to note that the Jewish rebels minted the coins on Roman coins with stripped or damaged faces, possibly out of defiance of the Roman occupation. The revolt coins featured the  facade of the Beis Hamikdash, trumpets, a harp or violin, as well as the inscriptions “Redemption of Israel” and “Freedom of Israel.”

Dr. Donald Tzvi Ariel, Head of the Coin Department at the Israel Antiquities Authority, examined over 22,000 coins discovered in archaeological excavations in the area of the Old City in Yerushalayim.

This examination revealed that only four of the coins are dated to the period of the Bar Kochba revolt. This is a very small number, even more so when compared to the large number of Bar Kochba coins that have been found outside Yerushalayim.

The recently discovered coin is the only Bar Kochba-era coin found in the area on which the word “Yerushalayim” appears.

Despite their desire to do so, the Bar Kochba rebels failed to breach the boundaries of the Old City of Yerushalayim. This fact gives rise to the question of how four coins from the revolt period still managed to make their way into the city.

The excavators, archaeologists Moran Hagbi and Dr. Joe Uziel of the Israel Antiquities Authority, raise the possibility that the coins were brought to Yerushalayim (where the Legion camp was seemingly posted) by Roman legionnaires of the Tenth Legion, who participated in suppressing the revolt and saved the coins they found on the battlefields, possibly as souvenirs.

In the archaeological and historical research based on the testimony of the Roman historian Cassius Dio, it is accepted that the Bar Kochba revolt broke out in 132 CE, after Emperor Hadrian declared the establishment of a Roman colony called Aelia Capitolina.

This colony was built on the ruins of Jewish Yerushalayim and began with the construction of a temple on Har HaBayis. The establishment of the Roman city and the construction of an idolatrous temple in place of the Beis Hamikdash, in addition to restrictive religious decrees, distressed the Jewish population that had remained in the city. This launched a widespread revolt against the Roman government under the leadership of Shimon Ben-Kosiba, known as Bar Kochba.

The revolt itself lasted about five years, causing heavy casualties among the Roman legions – so much so that they had to deploy large military units from around the Roman Empire to complete their ranks. The revolt ended with the destruction of hundreds of Jewish communities and villages that took part in the revolt.