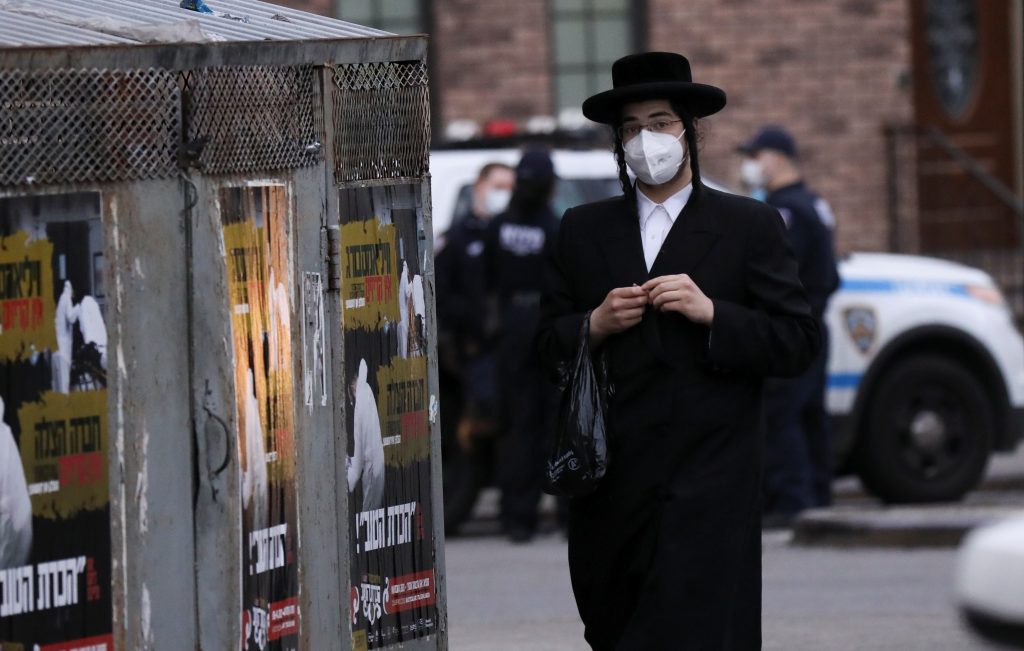 New York City Mayor Bill de Blasio apologized Monday for a tweet last week that called out the “Jewish community” for social distancing violations at a large funeral, but said that the comment emanated from his concern for the community’s welfare.

“I used words I wish I hadn’t used,” said de Blasio on a conference call with Orthodox Jewish media outlets. The mayor said he would like to “apologize for that,” but noted that he “spoke out of a profound sense of the danger, right before my eyes.”

Last Tuesday night, a funeral was held in Williamsburg for HaRav Chaim Mertz, zt”l, Tola’as Yaakov Rebbe, who passed away from the coronavirus at the age of 73. A large group of mourners gathered, many of whom were not wearing masks, and de Blasio himself joined police in dispersing the crowd. In a series of tweets thereafter, de Blasio lashed out at what he said was a dangerous violation of social-distancing guidelines.

“Something absolutely unacceptable happened in Williamsburg tonite: a large funeral gathering in the middle of this pandemic,” wrote the mayor. “My message to the Jewish community, and all communities, is this simple: the time for warnings has passed. I have instructed the NYPD to proceed immediately to summons or even arrest those who gather in large groups. This is about stopping this disease and saving lives. Period.”

Elected officials and other leaders from around the country criticized the mayor’s calling out “the Jewish community,” particularly as last year had seen a record number of anti-Semitic incidents in the New York area and across the country.

At his daily press conference Wednesday, de Blasio said that he was sorry if his words hurt anyone, but he didn’t apologize for speaking sharply against what he described as a dangerous violation of social-distancing rules.

NYPD officers poured into Williamsburg on Wednesday, handing out summonses to people they said were violating the emergency orders requiring social distancing and the wearing of masks for those unable to socially distance. Many in the Jewish community decried the police activity as an act of revenge.

De Blasio’s critics complained that the mayor hadn’t condemned the crowds that had gathered earlier Tuesday to watch a military flyover in New York. The critics’ ire was raised further on Saturday, when images appeared on social media of crowds enjoying the warm weather in parks, and when the NYPD tweeted that it was handing out masks to people in parks who did not have them. Jewish officials bemoaned what they deemed a “tale of two cities” – summonses in Williamsburg, as opposed to the polite distribution of masks elsewhere.

In his daily press conference Sunday, de Blasio said police are indeed enforcing social distancing and summonsing violators, but while acknowledging crowding in some parks, praised New Yorkers for what he described as largely following social-distancing guidelines.

With pressure mounting over what critics referred to as a “double standard” in enforcement, City Hall arranged a conference call Monday with Orthodox outlets, in which the mayor apologized for his choice of words, but pointed to his longstanding relationship with the community in saying his tweets had come in frustration over the dangers posed by violations of social-distancing guidelines, and that this was not the first reported incident of violations by a small minority of the community.

“We’ve seen extraordinarily clear and consistent messages from community leaders, and I’ve talked to so many leaders and heard directly from them how adamant they are about getting these messages across,” said the mayor. “I hope that gives you some sense of why I was so frustrated and so angry with what I heard about on Tuesday night, and what I saw then with my own eyes.”

“What I saw was a gathering that turned out to be not dozens, not hundreds, but thousands of people. And that meant that everyone there, their lives were at risk. And I love this community and I feel close to this community, and what I saw before my eyes, was Jewish lives in danger, the lives of New Yorkers in danger. And I knew at that moment that people would, as a result of this gathering that I saw before my eyes, that there would be people who would lose their lives in the days ahead, that it would spread the virus, and particularly afflict our elders and put their lives in jeopardy. And that, in fact, some would die. That’s the painful reality of what I saw, and it made me very angry and very frustrated.

“And I spoke out of that passion and that frustration and obviously I used words I wish I hadn’t used, and I’ve apologized for that and I continue to apologize for that.”

De Blasio reiterated that despite his regrets over his wording in the tweet, he stands by its message of strict enforcement, and that the city would continue to enforce social distancing across the city.

“We value protecting human life – that’s true of every faith, it’s true of the Jewish faith, we are going to protect the people of this city, and that means we’re going to enforce these rules aggressively in every community.”

In response to a question by a Hamodia reporter about what some had deemed a vengeful ticket blitz in Williamsburg, the mayor said, “I don’t have any indication of anything like ‘revenge.’ I believe that there was a deep sense that what happened on Tuesday night was unfortunately a horrible danger to the community. And that there have been some other gatherings before and that clearly we had to come to a moment where we said we’re no longer tolerating gatherings and we have to be very, very clear, because we have to save lives.”

But in response to another reporter’s suggestion, he said he would have a conversation with the NYPD and “consider” that those issued summonses would have their fines waived if they subsequently comply with all social-distancing guidelines and have no future violations.

Several reporters also asked whether de Blasio would remove the tweet at issue, which implies that the “Jewish community” as a whole violates social distancing. The mayor replied that he was hesitant to do so, because “in this world if you take a tweet down that becomes its own criticism,” and that he preferred to leave it up with his subsequent clarifications, emphasizing that both those qualifications and his past relationship with the Jewish community show that his remarks do not indicate anything against the community, but just some ill-conceived words out of frustration over a small minority of violators.

The mayor did say he would discuss with advisors whether to remove the tweet, and he understands that though he had no anti-Semitic intent, “against the backdrop of anti-Semitism that is way too strong in this country and in this world and must be fought every single day, I can understand why people say … anything that even inadvertently contributes to it is a real problem and must be addressed.”

De Blasio disputed a reporter’s assertion that his relationship with the Jewish community has become “fractured,” saying that since the incident, he has spoken to community leaders whom he has worked with for two decades, and they “understood why, what I saw and experienced was so exceptional, so dangerous, that I was reacting out of that.”

“I do not believe it is a fractured relationship,” said the mayor. “I believe that if someone does something by mistake, or does something ill-considered which I’ve certainly said was my fault that people are fair about it; they don’t take a single moment and forget the two decades that came before it.”

But the mayor emphasized that he believes the focus now must be on moving forward to continue fighting the coronavirus pandemic, and asked the media outlets to emphasize the need for compliance and safety measures.

“I’ve gone out of my way to say what I meant and to apologize for the mistake,” said the mayor. “But we need much more energy to go into saving lives in the Jewish community and all communities right now. While we are having this conversation – as meritorious as it is – we need to have even more energy go into educating people in the community about the dangers that people are facing right now. If one more person dies because there was something we didn’t do to ensure that people stay at home or practice social distancing, if one more person dies because we were focused on the wrong thing, I think we would all regret that. So my focus is going to be on saving lives.”

“I’m going to work closely with the community and community leaders to move us out of this crisis and forward together. We can – even out of the pain we’ve been through – we can move to a better place, in terms of a city that serves all our people and respects all our people, and that’s what I intend to be the shepherd of.”