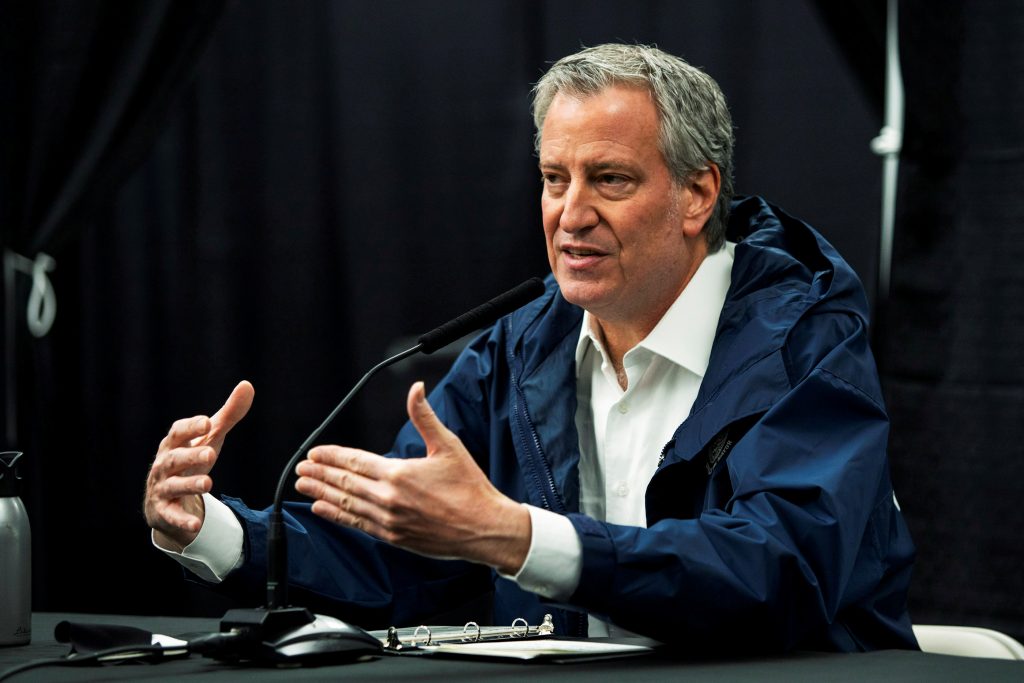 New York City Mayor Bill de Blasio is under fire for appearing to warn all the city’s Jews of a crackdown after a large crowd gathered at a levayah in Williamsburg on Tuesday.

This levayah was of a very prominent person, the Toylaas Yaakov Rebbe Harav Chaim Mertz ZT’L, that would normally have drawn tens of thousands of Jews, most of whom followed guidelines and stayed home. On a whole, the Jewish community has followed the regulations throughout the coronavirus pandemic. Unfortunately, several hundred mourners ignored the social distancing regulations and attended the levayah. The mayor came personally to disperse the crowds and followed up with comments that were seen by many as anti-Semitic.

“My message to the Jewish community, and all communities, is this simple: The time for warnings has passed. I have instructed the NYPD to proceed immediately to summons or even arrest those who gather in large groups. This is about stopping this disease and saving lives. Period,” he tweeted Tuesday night.

The tweets drew a torrent of criticism, as many accused the mayor of generalizing against the Jewish community for the actions of a few, especially as anti-Semitic incidents have spiked in the area over the past months.

At his daily press conference Wednesday, de Blasio said that he was sorry if his words hurt anyone’s feelings, but he didn’t apologize for speaking sharply against what he described as a dangerous violation of social-distancing rules.

“There are over a million Jewish people in NYC,” Greenblatt wrote in a post. “The few who don’t social distance should be called out — but generalizing against the whole population is outrageous, especially when so many are scapegoating Jews. This erodes the very unity our city needs now more than ever.”

Texas Senator Ted Cruz wondered, “Would deBlasio have sent this identical tweet with the word ‘Jewish’ replaced by any other religious minority? If not, why not? Laws should be enforced neutrally w/o targeting religious faith.”

Councilman Chaim Deutsch wrote: “This has to be a joke. Did the Mayor of NYC really just single out one specific ethnic community (a community that has been the target of increasing hate crimes in HIS city) as being non-compliant?? Has he been to a park lately? (What am I saying – of course he has!).

“Obviously everyone should be social distancing and being extremely careful – and almost everyone has been! With data trending in a positive direction, we can see the light at the end of the tunnel IF – and only IF – people continue to be vigilant.

“But,” noted Deutsch, “singling out one community is ridiculous. Every neighborhood has people who are being non-compliant. To speak to an entire ethnic group as though we are all flagrantly violating precautions is offensive, it’s stereotyping, and it’s inviting anti-Semitism. I’m truly stunned.”

Many other officials chimed in with strongly worded condemnations of the mayor.

It was noted that earlier on Tuesday, thousands of New Yorkers failed to social distance to watch a flyover – which brought no comment from de Blasio.

Early Wednesday, the Tola’as Yaakov community released a statement in which they explained their position, noting that they had wanted the levayah to be held with keeping the restrictions. “We understand Mayor Bill de Blasio’s frustration and his speaking out against the procession,” they wrote. “It also hurts that this led to singling out the Jewish community, and for that we apologize to all Jewish people. We know that the mayor’s reaction came from his concern for the health and safety of our community and the entire city, and it wasn’t ill-intended.

“Health and life take precedence to anything else, and we shall all follow those rules,” their statement concluded.

On Wednesday afternoon, Agudath Israel of America said in a statement, “New York Mayor Bill de Blasio’s tweets last night about a large funeral that took place in Williamsburg, Brooklyn created a maelstrom of protest. They gave the impression that he saw the Jewish community, in particular, as flouting rules of social distancing in this challenging time.

“The mayor expressed regret this morning for the way his words were taken. We agree with that sentiment. No matter how well-intentioned the Mayor might be, words that could be seized upon by bigots and anti-Semites must be avoided at all costs.

“The Jewish community as a whole, and the Orthodox Jewish community in particular, are heeding social distancing rules, including at funerals. In fact, weeks ago, Agudath Israel shared clear guidelines for funerals and burials developed by the National Association of Chevra Kadisha (NASCK); guidelines that were patently violated by last night’s funeral.

“While we at Agudath Israel keenly understand the deep grief over the loss of a beloved leader, the health and safety of our community, neighbors, and that of our dedicated law enforcement officers must be always be our highest priority.”