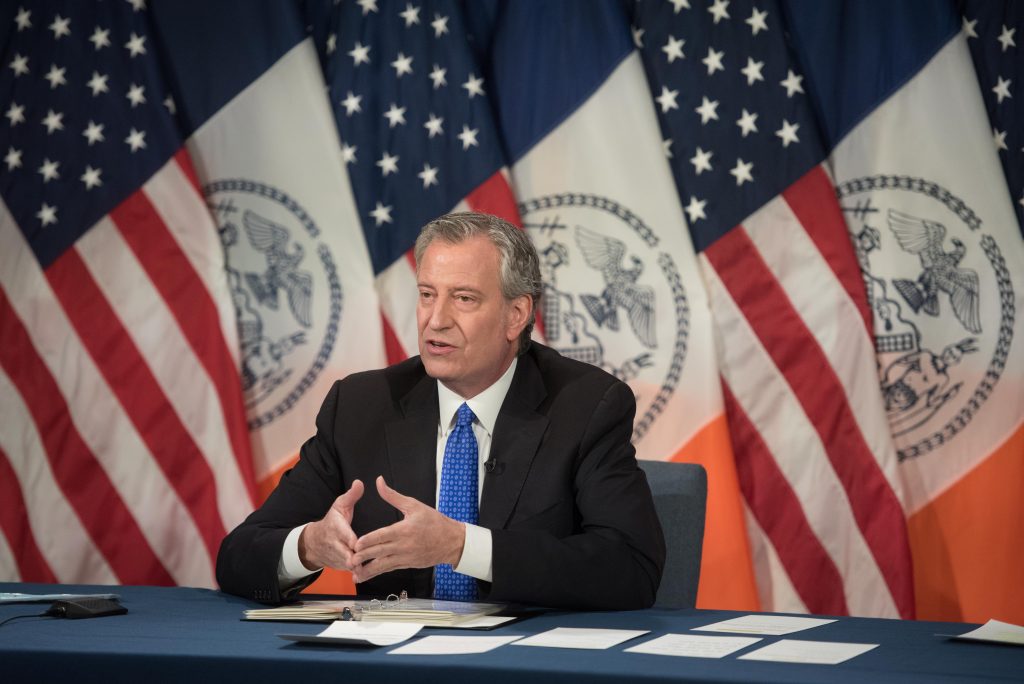 New York City Mayor Bill de Blasio once again took heat over the weekend for what critics say is a targeting of the Jewish community for social-distancing violations despite crowding in parks across the city, but the mayor said the guidelines are being imposed equally.

After the mayor himself joined police to break up a crowded funeral in Wiliamsburg last Tuesday evening – which followed reports of two public Jewish funerals early last month – de Blasio tweeted, “My message to the Jewish community, and all communities, is this simple: The time for warnings has passed. I have instructed the NYPD to proceed immediately to summons or even arrest those who gather in large groups. This is about stopping this disease and saving lives. Period.”

De Blasio faced a torrent of criticism for singling out the Jewish community in his comments. At his daily coronavirus press conference the next day, the mayor said that he was sorry if his words hurt anyone’s feelings, but he didn’t apologize for speaking sharply against what he described as a dangerous violation of social-distancing rules.

NYPD officers descended on Williamsburg on Wednesday, giving summonses for people who were not socially distant and not wearing masks, leading to allegations that the city was taking revenge on the community.

On Saturday, the first warm day in weeks, many New Yorkers headed to parks. Images shared on social media of crowds gathered without a police officer in sight raised the ire of many public officials.

Former City Councilman David Greenfield tweeted that the “message” the city was sending is effectively that people may violate the rules “if you’re not Chasidic.”

Some police officers are giving masks to people in parks who did not have them. The NYPD tweeted a photo of an officer giving a woman a mask, with the message, “No mask? No problem. This park-goer in Domino Park didn’t have a mask, no problem, our task force officers were more than happy to provide her with one.” Councilman Chaim Deutsch tweeted in response, “I’m confused … when do you give out a mask and when do you give out a summons?”

Assemblyman Simcha Eichenstein tweeted, in response to a video of people in Central Park, “Yet chasidim were aggressively SLAPPED with summonses of up to $1,000 for not wearing a mask. Tale of two cities.” Former Assemblyman Dov Hikind also tweeted that this was a “tale of two cities” – the term de Blasio himself has used to refer to economic inequality.

Councilman Eric Ulruoch tweeted, “Media reports of @NYPDnews selective enforcement targeting the religious Jewish community is very disturbing. Everyone in NYC needs to follow @CDCgov #COVID guidelines on social distancing. Issuing summonses to some and handing out masks to others is unfair and discriminatory.”

At his daily coronavirus press conference on Sunday, the mayor and Police Commissioner Dermot Shea said police were indeed out in the parks and gave some summonses, but the mayor mostly praised New Yorkers for what he described as largely following social-distancing guidelines.

This reporter asked the mayor to respond to the complaints of a double standard. Below is the exchange in full.

Question: Hi, how are you? There’s some criticism of you on Twitter over the weekend by elected officials, that I’d like you to respond to, saying there’s a tale of two cities. On the one hand, you tweeted sharp criticism of a funeral in Williamsburg, and the next day police officers descended on the neighborhood giving out large numbers of summonses. I know you mentioned the distinction between gathering versus a bunch of individuals, but those people who got the tickets the next day were just a bunch of individuals out in the street. Yesterday, there were many images of jam-packed parks in the city, people not wearing masks. You had no Twitter comment. Assemblyman Simcha Eichenstein wrote, “Yet chasidim were aggressively SLAPPED with summonses of up to $1,000 for not wearing a mask. Tale of two cities.” NYPD tweeted, “no mask, no problem” – this lady in the park didn’t have a mask, we gave her a mask. Councilman Chaim Deutsch responded, “I’m confused, when do you give a mask to when do you give a summons?” And so my question is if you can respond to this criticism, the politicians are saying that apparently there’s one neighborhood that’s gets sharp criticism and the community called out by name, while in other instances there’s silence or the polite handing out of masks. Thank you.

Mayor: Reuvain, I just dispute that fundamentally. There has been enforcement for weeks and weeks. And look, I love my city and I understand everyone looks out for their own communities within this city, but I’ve alternately heard critique of too much enforcement or not enough enforcement in a variety of different communities. So, we want to make this an entirely consistent reality. I want it to be abundantly clear, the NYPD will be out enforcing and a number of other agencies will be out enforcing in all communities the same way, period. What I saw with my own eyes on Tuesday night in Williamsburg was absolutely unacceptable and was something that we had not seen on that scale anywhere and it was exactly what we cannot allow to happen. And there had been other large funerals before in the community and we’re not going to allow that to happen. So, we had a particular problem we had to deal with. But we’ve had other types of problems in other places, and we’re going to deal with everyone equally. So, again, that hierarchy … the worst thing is a large gathering. And if it’s dozens of people, it’s bad. If it’s hundreds of people, it’s worse. If it’s thousands of people, it’s terrifying. And Reuvain, we saw on Tuesday night, thousands of people in close proximity. If they had not been broken up by the police, they would have stayed for longer. Many of them did not have face coverings. This means lives will be lost. It is unacceptable. But that’s going to be true in any community. You talk about a really large gathering, absolutely unacceptable, everyone’s going to get summonsed. Anyone who stays, summonsed instantly. Again, whether it’s hundreds, same thing; dozens, same thing. We’re coming after all gatherings. That is different than a bunch of people in a park who are distanced from each other. If there’s small clumps of people that are not distanced, we’re going to go in and tell them you have to distance immediately. If they don’t, they’re getting summonsed. Each situation is looked at in degree. If someone doesn’t have a face covering, we’re going to offer them a face covering. If someone says, I refuse to put on a face covering, they have a problem and they’re asking for enforcement. So, it is going to be done equally across all communities, one message that we have to save lives and anyone who is not following these simple rules is endangering the lives of everyone else.

“The mayor tried making a distinction between gatherings versus individuals who come to the area separately, but the people who received summonses in Williamsburg last Wednesday were all there separately,” said Yeger. “This was pure targeting of the Williamsburg Jewish community. ‘Why the different treatment’ is a pretty straightforward question that many have been asking. I’m disappointed the mayor didn’t feel it deserved a straightforward response.”