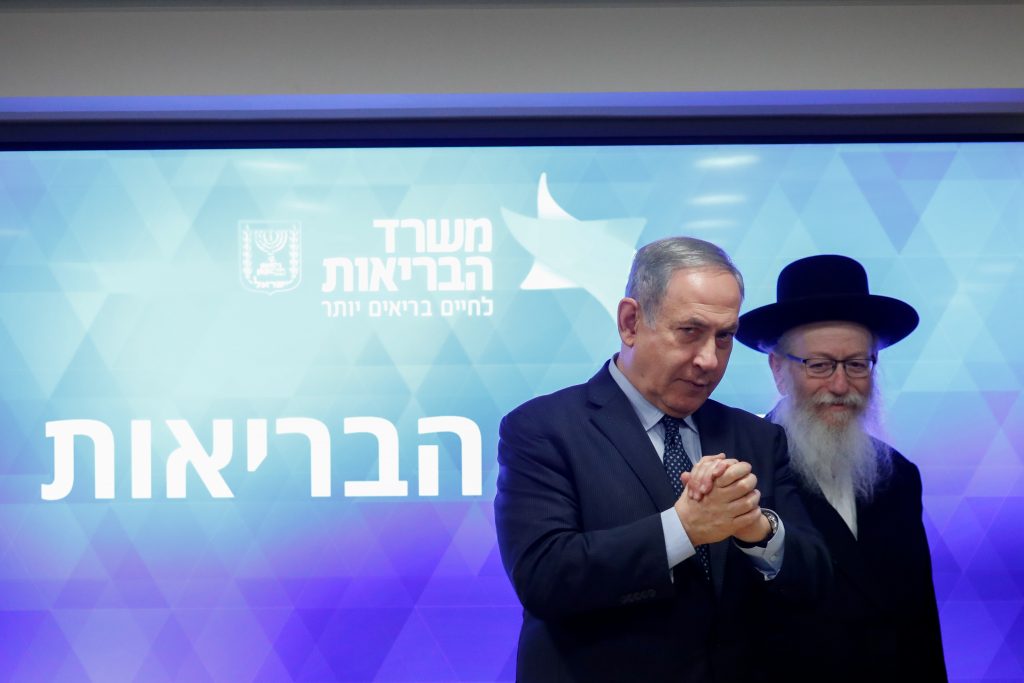 Health Minister Rabbi Yaakov Litzman has made a decision to leave his post in favor of the Construction and Housing portfolio, as the new government is taking shape.

In a statement Sunday, he made the official announcement.

Rabbi Litzman said that he would “prefer to lead a broad approach to solving the housing shortage in the Housing Ministry.”

With its natural growth, the chareidi community is in need of many new apartments each year and the hope is that a chareidi minister will be able to help bring new projects into fruition.

In his statement, Rabbi Litzman noted that after his years at the helm of the ministry, “I can say that our health system is strong and stable.”

He noted that life expectancy in Israel is very high compared to most countries in the world.

“Over the last few years, we have raised the issue of health to the top of the public agenda. I was privileged to advance far-reaching reforms in the health system, to move forward in every parameter, for the benefit of all Israeli citizens. I set myself a number of goals and, b’ezras Hashem, I met them successfully. We have implemented reform in dental care for children up to the age of 18, and last year added for adults as well. We successfully led mental health reform, initiated nursing care reform, brought new MRIs to hospitals, implemented the food labeling reforms, revolutionized peripheral medical services to reduce the life expectancy gap between the center and periphery, established a new public hospital in Ashdod. We also doubled the basket of medicines for the public, saving many lives with the help and help of hundreds of thousands of public inquiries with full equality and without discrimination.

“I urge the incoming minister to implement the plan I reached with Finance Minister Moshe Kahlon, together with Prime Minister Binyamin Netanyahu, immediately after the first elections last year, for a historic investment of billions of shekels in favor of the health system, while raising the health tax by 0.52%, as well as the continuation of the building of two hospitals that we started: the Peres Hospital in the south (Be’er Sheva) and the Begin Hospital in the north (Kiryat Ata), and the establishment of a national cancer healing center with protons.

“I am proud of the functioning of the health system during the coronavirus crisis. We took dramatic moves in favor of the citizens of Israel, notably we we were the first to close the entrance to Israel from China and other countries in the Far East, which proved to be correct and critical.”

Responding to the criticism of his handling of the coronavirus pandemic, a source in Rabbi Litzman’s office said that he is “not running away or hiding from any inquiry committee. We’re not scared of criticism.

“He was the first to shut Israel down to incoming flights from China when everyone laughed at him in the Foreign Ministry and the ambassadors pressured him to change the decision.”

According to the sources, “Every minister is changing office. Replacing Gilad Erdan now [from the Internal Security ministry] is not when he’s at his peak? When a new government is formed, people change positions. That’s how it is.”

Rabbi Litzman has been the de facto head of the Health Ministry since 2009, except for a period between 2013 and 2015 when he was out of the government.

Professor Ze’ev Rotstein, CEO of Hadassah Hospital, said the health system “will remember Litzman’s personal contribution of many years to the Health Ministry” including attaining unprecedented funds for state-subsidized drug treatments and several reforms, notably the free dental care for children up to the age of 18.

Meanwhile, Blue and White is expected to ask for the Health portfolio and while it was earlier expected to trade the Foreign Ministry for it and make party co-leader MK Gabi Ashkenazi the next health minister, Ashkenazi said that the party wanted the post for a professional appointment. The party’s candidate would be Sheba Medical Center Director General Dr. Yitzchak Kreiss.

There is also talk that the health portfolio might be given to current Defense Minister Naftali Bennet (Yamina).