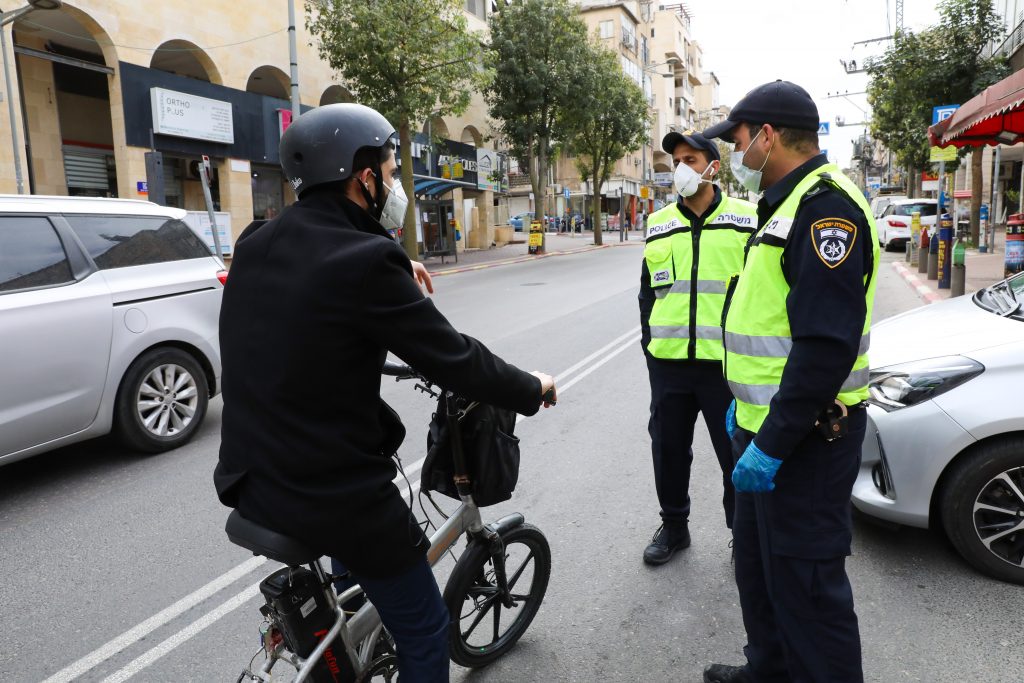 Whatever little outside activity remains permitted during the coronavirus lockdown must be done while wearing a mask, Israeli Prime Minister Binyamin Netanyahu‏‏ said in his latest update on Wednesday night.

“We ask the citizens of Israel to wear masks in the public domain,” said the prime minister. “If you don’t have a mask, use a scarf or any other covering that will reduce the possibility of infecting others.”

Regarding the situation in Bnei Brak, where the outbreak has been especially acute, Netanyahu said there will be further limits on travel in and out of the city.

“We have decided to limit to the bare minimum the entrances and exits from the city,” he said.

All coronavirus patients and suspected cases in Bnei Brak will be evacuated to special hotels converted for the purpose.

Implementation of the latter policy reportedly already began overnight Tuesday, as at least 67 coronavirus carriers were evacuated from Bnei Brak to a stadium in nearby Ramat Gan, The Times of Israel reported. From there they were to be dispersed to special isolation hotels set up by the Defense Ministry, as the prime minister mentioned on Wednesday.

Officials said that 723 residents of Bnei Brak, which has a population of over 195,000, were infected with the coronavirus. They projected that if the trend continues, as many as 1,500 residents will be sick by next week, among them as many 60 to 80 people in serious condition within the next two months, according to The Jerusalem Post.

Along with the news restrictions comes financial support. All families with children will receive 500 shekel ($140) stipends for each child (up to four children) to help defray expenses over Pesach. Every elderly person will also receive such a grant, Netanyahu promised.

He spoke about his conversation with Prime Minister of Italy Giuseppe Conte and that his  counterpart told him that the lesson he can give him is “do the hard things first.”

“We must’ not fall into the trap of being [complacent],” he said about Israel’s relative success in curbing the COVID-19 virus. If so, “we might plunge.”

Referring to U.S. President Donald Trump’s warning that America faces 100,000 to 240,000 deaths in the next few weeks, Netanyahu said: “That’s the optimistic forecast.”

Offering a bit of hope, Netanyahu said that if people observe social distancing over Pesach, and don’t give in to the temptation to have family gatherings, “there is a chance that this Pesach will be a turning point” in the fight against the virus.

The question many people were asking after hearing the new guidelines was, where does one get a mask? There is a countrywide shortage, and they’re not on sale on newsstands, which are closed.

The director-general of the Health Ministry, Moshe Bar Siman-Tov, explained that the masks need not be professionally manufactured.

“You can improvise one at home. Save the masks for medical teams. You can take some cloth and two rubber bands and cover your face.”

The ministry will put out a video showing how masks can be made at home.

Meanwhile, a 72-year-old man died Wednesday evening of the coronavirus at Shaarei Tzedek Medical Center in Yerushalayim, the 26th fatality in the country and the sixth of the day.

Hospital officials say he was brought in yesterday in serious condition and died in the morning after a coronavirus test was taken. It came back positive.

The number of confirmed coronavirus cases passed the 6,000 mark.