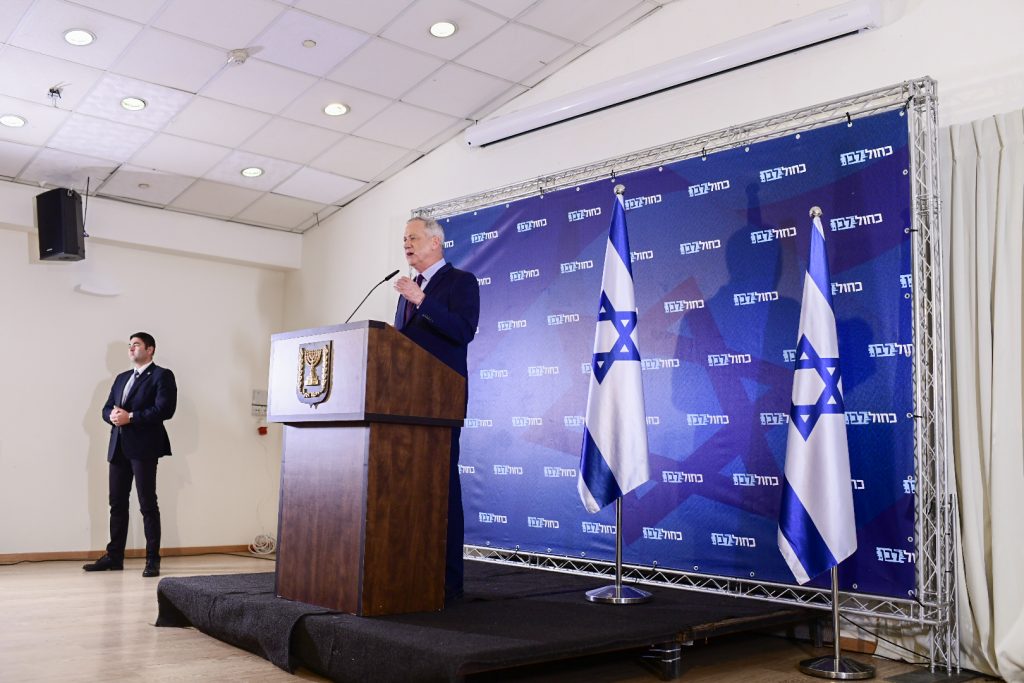 Both Binyamin Netanyahu and Benny Gantz dug in their heels on Motzoei Shabbos, each proclaiming that they were the legitimate winners of last Monday’s election, and both deriding the other for refusing to step aside. In an “emergency summit” held in Petach Tikvah on Motzoei Shabbos, Netanyahu again accused of Gantz, together with Avigdor Liberman, of “trying to steal the elections and ignoring the will of the people.” In response, Gantz said a short time later that it was Netanyahu who was ignoring the will of the people. “For the third time in a row, the people have said that they do not want Netanyahu as prime minister anymore. Tine after time, the people have proclaimed that the Netanyahu era is over.”

In the back-to-back statements on Motzoei Shabbos, it appeared that neither side was prepared to compromise. The plan presented by Blue and White MK Ofer Shelach last week, where Gantz would form a government with the votes of the United Arab List, was “an attempt to defraud the public. Not 24 hours before the election, Gantz proclaimed that neither he nor the two Chief of Staffs with him would make a deal with the List, in any form. This is a party that has in its platform the denial of Israel as a Jewish state, a demand that the government fund the return of Arabs to Israeli cities, and trying IDF soldiers as war criminals.” Netanyahu portrayed his victory as “the greatest in Israeli history. Nearly two and a half million Israelis voted for my leadership. They want to now throw those results away.”

The fact that Gantz, along with Shaul Mofaz and Moshe Yaalon, was willing to make a deal with the List proved that “they will cynically stop at nothing, including defrauding the voters, in their personal war against me.” Netanyahu said that he, on the other hand, had acted responsibly when he had the opportunity to increase his votes. “The day before the election, Itamar Ben-Gvir of Otzma Yehudit told me via a representative that he was willing to remove his candidacy if I would agree to one thing – to allow Jews to pray on Har HaBayis. That might sound like a logical idea, but I know that it would cause much anger in the Muslim world. I said that there is a limit, there are things I am not willing to do to win elections.” Netanyahu added that “I am not going anywhere, I will continue to lead the Likud.”

Gantz said that he had been accosted by a Netanyahu supporter on his way to the Kfar Maccabia venue where he made his speech. “This time things will be different. I will not be silent and allow the inciters to threaten us. I intend to establish a government that will reboot relations in this country. After I receive a mandate from the president to establish a government I will establish one that will serve all Israelis, including those who did and did not vote for me.”

The possibility that Gantz could form a government that relied on the votes of the United Arab List increased greatly Thursday night, over reports that Moshe Yaalon, who had opposed the idea, had changed his mind. According to the report by Ha’aretz, the List would vote for Gantz as the choice for prime minister – sans the party’s Balad MKs, who would abstain. Together with the votes of Yisrael Beytenu, that would give Gantz 59 votes – one more than the number Binyamin Netanyahu could garner from the rightwing bloc, and enough to form a minority government. The government would not necessarily include the List, but it’s likely the Arab MKs would get significant representation on Knesset committees and significant budgets for projects they promote. According to the report, both Yaalon and Liberman are prepared to go forward with this plan in order to depose Netanyahu.

In a statement on Motzoei Shabbos, List chairman MK Matanas Shahada said that “the Arab public has said its piece – it wants a change and an end to racism and discrimination. Netanyahu would love to cancel our 581,540 votes but he cannot, and Gantz wants to ignore them but cannot.” List MKs would meet Sunday to discuss their position on recommending Gantz as prime minister or supporting him in a prime ministerial bid.