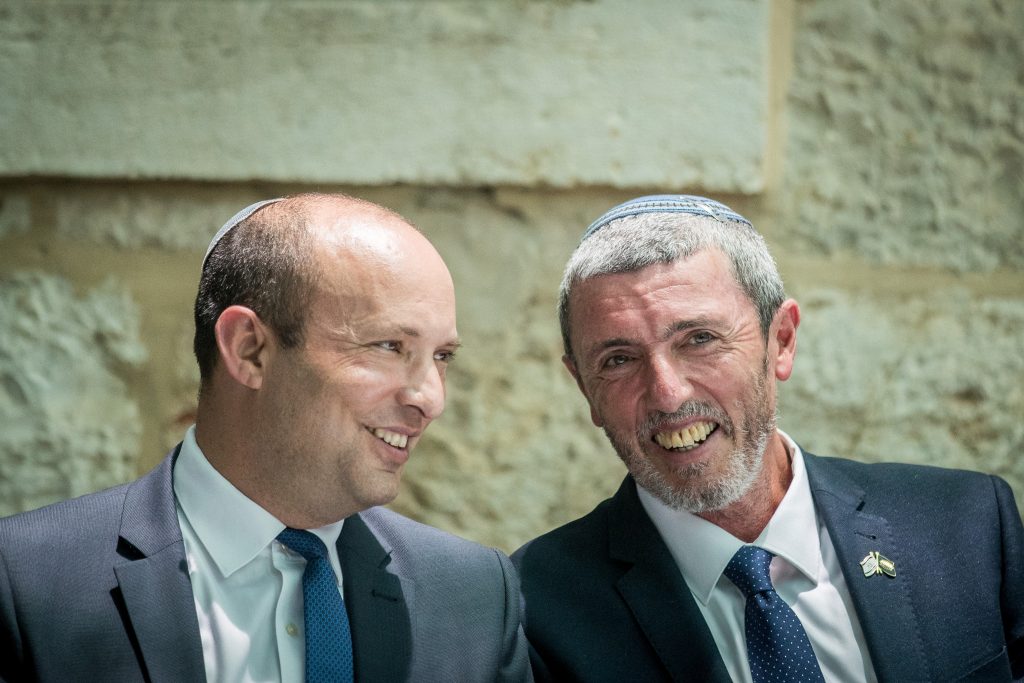 The new united right party, which will be called Yemina, will continue to operate as a single party even after the March election, party head Naftali Bennett said Thursday. “We have united, and not just as a technical bloc,” Bennett wrote Thursday in a social media message. “We will remain a united list both before and after the election.”

In a last-minute deal Wednesday night, Bennett’s New Right signed a deal to run as a single list with Jewish Home, headed by Rafi Peretz. The deal places Bennett as first on the list, with Peretz second. Ayelet Shaked moves to third place, while National Union head Betzalel Smotrich is fourth.

“I am proud to lead the movement that unites the entire ideological right and all shades of religious Zionism – religious, secular, traditional, ‘chardalim,’ economic liberals – we are all in favor of ensuring the fullness of the Land of Israel and the Jewish people, and ensuring that Jewish tradition is protected. We are the best team in Israel and we will move forward to victory,” wrote Bennett.

Labor and Democratic Camp announced Monday that they would run together on a single list. Labor head Amir Peretz will lead the list, with Gesher’s Orly Levy-Abukasis second. Meretz head Nitzan Horowitz will be third. Commentators stressed that the united run was a “marriage of convenience,” with the union likely to break up immediately after the election. Officials said that the joint run was necessary, as polls showed that both Democratic Camp and Labor were dangerously close to the electoral threshold, and that there was a good chance that one or both might not pass it.

Prominently missing from the new rightwing party is Itamar Ben-Gvir of Otzma Yehudit, who had a signed agreement with Peretz that the latter abrogated. A bitter Ben-Gvir slammed Peretz for “stabbing me in the back” by unilaterally breaking the deal, and on Wednesday night submitted his Otzma Yehudit party’s list to the Central Elections Committee, ensuring it will be included on the ballot.

But Culture Minister Miri Regev on Thursday urged Ben-Gvir to withdraw his list. Regev said that it was highly likely that Otzma Yehudit would not pass the electoral threshold, as it failed to do in the previous two elections, thus wasting rightwing votes. “Prime Minister Netanyahu on Wednesday tried very hard to prevent a repeat of the situation in the 1992 election,” she wrote in a social media post, referring to a split on the right that led to the election of Yitzchak Rabin and the implementation of the Oslo Accords. “It’s not too late. I call on Otzma Yehudit to take on the mantle of responsibility and drop out of the race so that we do not repeat the mistakes of the past.”