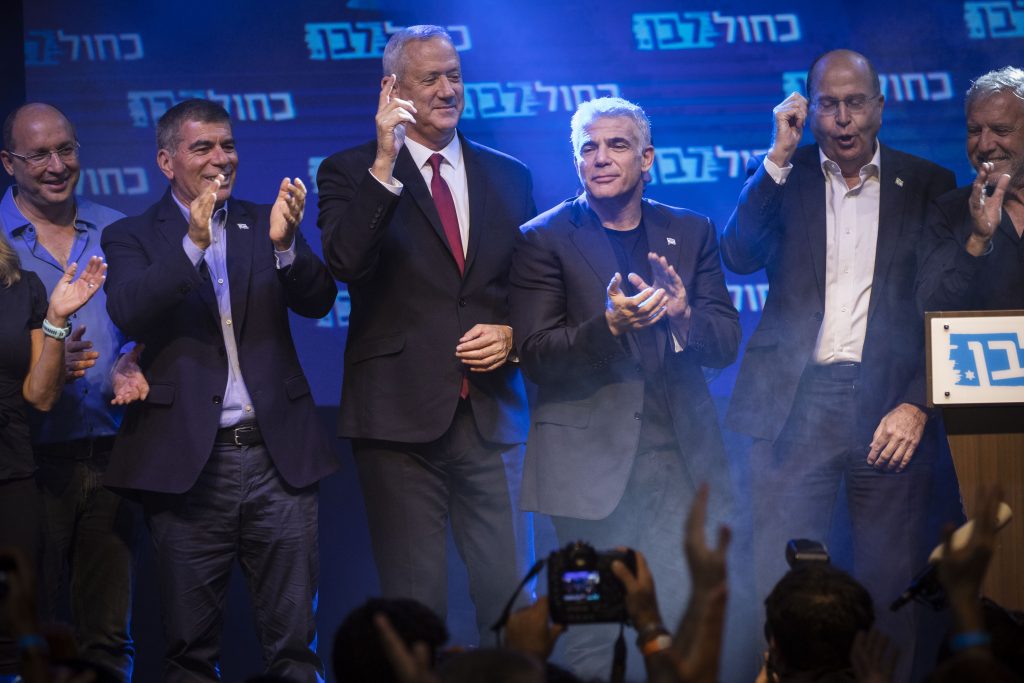 Laying out his own vision of what the next Israeli government would look like, Blue and White chairman Benny Gantz said that he was “interested in and I intend to set up a broad liberal unity government, under my leadership.”

Responding to calls earlier by Prime Minister Binyamin Netanyahu for a unity government, Gantz said at a press conference that “to form a unity government you don’t come into negotiations with preset political blocs and media spins about honesty and responsibility. The people have said their piece, and it would be best for all of us to consider the will of the people before any other consideration.”

Gantz appeared at the press conference with the other four top members of Blue and White in tow – Yair Lapid, Moshe Yaalon, and Gabi Ashkenazi. Lapid slammed Netanyahu, saying the prime minister “is trying to drag Israel into a third election. The people do not have faith in him, but he is trying to upend the people’s decision. Our intention is to set up a liberal government with [Avigdor] Liberman, the Likud, and other partners. This is not a condition Liberman set for us, this is something we said we would do from the beginning.”

The Blue and White-led government, he declared, would institute all the social-religious laws he has been espousing throughout the campaign, including public transportation on Shabbos, allowing businesses to operate on Shabbos, the institution of civil marriage, and more. Gantz did not interfere with Lapid’s comments.

Both Yaalon and Ashkenazi spoke against Netanyahu as well. “I appeal to Likud members and my friends in the religious parties; you will not succeed with Netanyahu,” Yaalon said, referring to a political pact signed earlier by the Likud, Yemina, United Torah Jewry and Shas that all four parties would enter coalition negotiations as a single bloc, demanding representation and policy implementations for all parties as a condition of entering any government. “The time has come to fix things. The time has come to say thank you to Netanyahu for what you have done, but now you are causing harm. Go take care of your criminal issues and we will take over from here.”

Earlier, Netanyahu said in his first official statement about the prospects for a new government that it appeared that there was no choice but to set up a unity government. “During the election campaign I called for a right-wing government, but unfortunately based on the results it does not appear that that will be possible,” Netanyahu said. “Therefore there is no choice but to establish a large unity government, as large as possible, that will include all groups who value the State of Israel.”

But sources in Blue and White dismissed those comments as meaningless. “First he makes a deal with the religious and chareidi parties, making it impossible to set up a unity government, and then he calls on Gantz to talk about unity. He is simply setting up a ‘blame-game’ scenario in which he can blame Gantz in case there are third elections. We are working on getting commitments from parties for recommendations that Gantz be given the first opportunity to establish the government, as we said we would in the campaign,” they said.