The Chief Rabbis said that the discrimination against the Ethiopian community should not be ignored, but they also called upon the Israel Police that in their actions to prevent violence, restraint will be maintained vis-à-vis the members of the community and to allow them to protest over the tremendous pain caused by the death of Teka. The Rabbis noted that all the issues that Ethiopians face can be dealt with by mutual dialogue and understanding.

The Chief Rabbis assured the members of the Ethiopian community that they would appeal to the law enforcement authorities to exercise restraint and tolerance toward the community in carrying out the protests and to act to lessen the sentences of the protesters who have participated in the demonstrations, in tandem with the promise of the leaders of the community to calm the situation.

Chief Rabbi Harav David Lau said that he understands the feelings of the members of the community following the feelings of discrimination that intensified with the tragic death of Solomon Teka. “Unfortunately,” he said, “there are young people who take the pain to places of violence against civilians and security forces. This is unacceptable. The correct way to solve the problems is through mutual dialogue while respecting others.”

The meeting was attended by the Chief Rabbi of the Ethiopian community, Rabbi Reuven Wabshat, the leaders of the community and a long list of representatives of the community rabbis and Keisim from all over the country.

Ethiopian Israeli protests on Wednesday night were muted compared to the out-of-control street scenes of the night before, though there were some clashes with police around the country.

On Wednesday Prime Minister Binyamin Netanyahu addressed the crisis, stressing that while unlawful conduct would not be tolerated further, efforts are under way to resolve some of the issues agitating the Ethiopian Israeli community.

“This community is dear to us. I say this as someone who today will chair a meeting of the ministerial team that is dealing with the problems of this community.

“We held discussions about over-policing, about changing patterns of behavior vis-à-vis members of the Ethiopian community. This has already led to an improvement and it could be that we need to bring about many more improvements, but one thing is certain. This cannot be dealt with by blocking roads or by violence; by responsible means certainly, to this end we are convening the committee,” the prime minister said.

Police said Wednesday that 136 people have been arrested since the start of demonstrations on Sunday. Those arrested were held on suspicion of assaulting police officers, vandalism and disturbing public order. 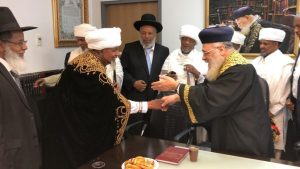 Lapid to Lead the Meeting of the EU-Israel Association Council