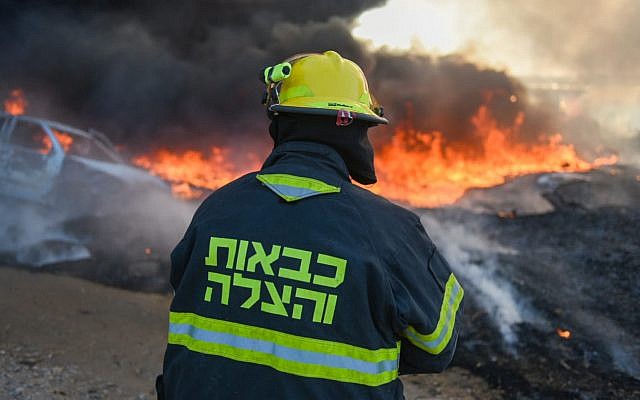 In what could be the worst day of Gaza-launched arson against southern Israel since it started over a year ago, at least 30 fires were started by incendiary balloons on Thursday, according to initial reports.

If the rate of fires continues into the night, it will be the worst such day on record, according to the Times of Israel.

The fires have been mostly in agricultural fields and grasslands, though some were also said to be in Israeli communities in the Sha’ar Hanegev and Eshkol regions, near the Gaza border. Seventeen of the 30 fires were said to be large ones.

The government has not made any specific military response to Thursday’s attacks.

MK Alon Shuster (Blue and White) from Kibbutz Mefalsim in the south, said, “the fire has reached inside Kibbutz Mefalsim. Soldiers, security officials, firefighters and kibbutz members are working to put it out. But we get the impression that Netanyahu doesn’t care at all.”

He added: “The resilience of the residents of the south will weather any challenge, but the neglect by the Israeli government has reached the point of criminal negligence, and it’s time that someone said so.”

New Right party leader Naftali Bennett said on Thursday that “the south is burning and the government is busy with elections. The government’s policy, according to which we do not eliminate terrorists who send explosive balloons [into Israel], endangers lives and harms our deterrence.”

As a punitive measure, Israel halted the supply of gasoline and diesel fuel from Israeli territory into the Gaza Strip on Tuesday. Last week, it reimposed restrictions on the Gaza coastal fishing zone after a wave of fires.

There have been some 100 fires started by incendiary balloons sent over the Gaza borders since Sunday.