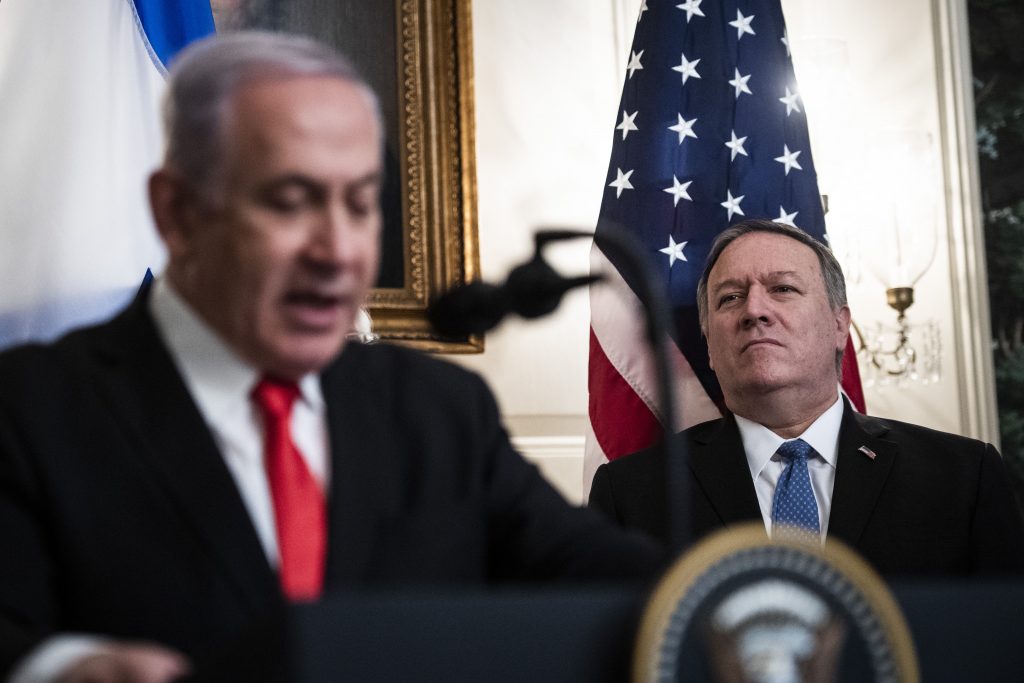 Secretary of State Mike Pompeo delivered a sobering assessment of the prospects of the Trump administration’s long-awaited Middle East peace plan in a closed-door meeting with Jewish leaders, saying “one might argue” that the plan is “unexecutable” and it might not “gain traction.” He expressed his hope that the deal isn’t simply dismissed out of hand.

“It may be rejected. Could be in the end, folks will say, ‘It’s not particularly original, it doesn’t particularly work for me,’ that is, ‘it’s got two good things and nine bad things, I’m out,’ ” Pompeo said in an audio recording of the private meeting obtained by The Washington Post.

“The big question is, can we get enough space that we can have a real conversation about how to build this out,” he said.

The remarks are the most unvarnished comments to date from a U.S. official about what President Donald Trump has called the “deal of the century,” an effort to resolve the intractable Israeli-Palestinian dispute he has entrusted to his son-in-law, Jared Kushner, and former lawyer Jason Greenblatt.

The unveiling of the plan has been repeatedly delayed, a point Pompeo noted.

“This has taken us longer to roll out our plan than I had originally thought it might, to put it lightly,” he said at a meeting on Tuesday of the Conference of Presidents of Major American Jewish Organizations, a New York-based group that addresses concerns to the Jewish community.

In trying to manage expectations, he said there are “no guarantees that we’re the ones that unlock it,” he said, referring to the frozen conflict. “I hope everyone will engage in a serious way.”

He also recognized the popular notion that the agreement will be one-sided in favor of the Israeli government. “I get why people think this is going to be a deal that only the Israelis could love,” he said. “I understand the perception of that. I hope everyone will just give the space to listen and let it settle in a little bit.”

Since the U.S. president announced plans to solve the decades-old conflict, the United States has taken a series of actions vehemently opposed by the Palestinians, including recognizing Yerushalayim as Israel’s capital without a final status agreement, cutting funding to the Palestinian Authority and the U.N. refugee agency that serves them, forcing their diplomatic office in Washington to close, and recognizing Israeli sovereignty over the Golan Heights.

Two attendees said they left with the impression that Pompeo was not optimistic that the plan would succeed. “He was not in any way confident that the process would lead to a successful conclusion,” said one of the attendees; both spoke on the condition of anonymity because the terms of the meeting were declared to be off the record.

Elan Carr, the State Department’s special envoy to fight anti-Semitism who also attended the meeting, expressed a different view, saying he thought Pompeo “provided a hopeful assessment over the prospect of a peace deal between Israel and the Palestinians.”

“It was an excellent briefing that was very well received by the conference,” he said in a statement offered by the State Department.

Aaron David Miller, a former negotiator and analyst on Middle East issues for Republican and Democratic administrations, said the remarks were “the most revealing and real assessment of the plan that I’ve heard so far.”

“The fact that Pompeo so easily conceded the perception – and likely the reality – that the plan was strongly structured and tilted toward the Israelis is striking,” Miller said.

The CEO of the group that hosted the event, Malcolm Hoenlein, said he thought Pompeo’s remarks reflected his awareness of allegations of a pro-Israel bias but not the secretary’s own view of the plan. “He was saying it’s too easy to fall into the trap of these negative assessments,” he said.

Pompeo, unlike previous secretaries of state, is not overseeing the peace effort, but he told the group he is kept closely abreast of the proposal, including a game plan for what to do if Israel proceeds to annex territory in the West Bank. “I have seen what I believe are all of the details of what it is we are going to roll out,” he said.

Pompeo said the administration never believed that achieving a lasting peace agreement would be easy. “We’re under no illusions (that) we’re going to show up with this thing and everyone’s going to say, ‘Tell me where to go for the signing ceremony,’ ” he said. “It doesn’t work that way.”

If the peace plan had appeared to be an uphill battle when Pompeo spoke on Tuesday night, it hit another significant hurdle a day later as Israeli Prime Minister Benjamin Netanyahu failed to form a governing coalition and Israel’s parliament voted to dissolve itself, sending the country back to elections in September.

Now, if the White House wants to avoid rolling out a peace plan during a sensitive election campaign period for Mr. Netanyahu, it will have to wait until at least November when a new Israeli government is expected to be formed. By that time, Mr. Trump will be stepping up his own reelection campaign.

Pompeo said the State Department had given “quite a bit of consideration” to what it would do if the plan “doesn’t gain traction.”

“I don’t want to call it failing,” he said. “Call it whatever. I fail a lot, so it’s not about not using a word like that.”

The contingency planning includes how to respond if the Israeli government decides to annex territory in Yehudah and Shomron, a move many believe would be a final death knell to a two-state solution.

As part of his election campaign, Mr. Netanyahu pledged to annex Israeli settlements in Yehudah and Shomron if he won, a move considered illegal by much of the international community. He also may face pressure from right-wing coalition partners to take advantage of the remaining time before the next U.S. election.

A peace plan that lays down Israel’s right to sovereignty over certain areas of the West Bank could bolster calls from those pushing for annexation.

If Israel did go ahead with annexation, the administration would then consider “what would be the best ways to achieve the outcomes that we think are in America’s and Israel’s best interests,” Pompeo said.

Palestinian officials see the White House plan as inevitably biased against them. In a speech broadcast on Palestine TV recently, Palestinian Authority President Mahmoud Abbas said the “deal of the century” and the Trump administration’s upcoming economic summit for the Palestinians in Bahrain [would fail].

The goal of the Bahrain summit is drum up support for the economic component of the administration’s peace plan without getting bogged down in the more contentious territorial issues.

Abbas has said Palestinian officials will boycott the summit.

Pompeo said that if Kuwait signs up, all of the Persian Gulf states will be represented in Bahrain “to at least come to listen.” He said it was hard to expect Gulf nations to come out in “full-throated support” for the process when they haven’t seen the whole plan.

Critics of the Trump administration’s approach have picked up on the fact that the economic summit is not being held in tandem with political discussions.

“You can’t do serious economic development without resolving the security and political issues that allow investors and internal economic growth and employment,” Miller said.