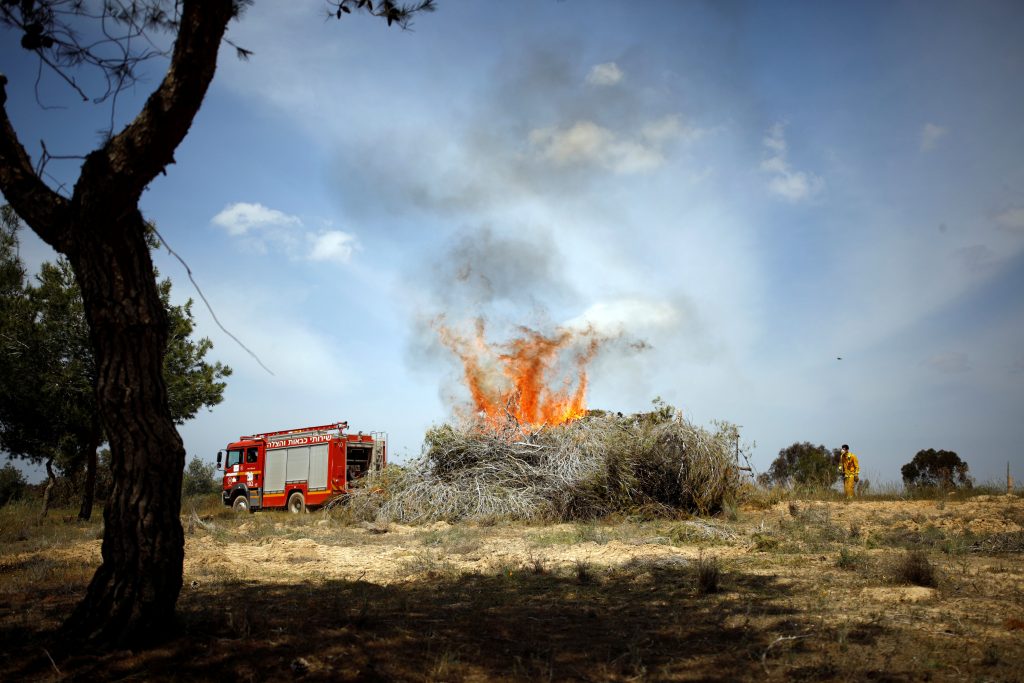 While Gaza terror groups said that they would limit their activities to “non-violent protest” at mass demonstrations at the Gaza border fence this weekend, rioting continued on Thursday night as indications grew that the IDF was preparing for a major operation.

At least 100 firebombs were thrown at Israeli soldiers on Thursday night, and numerous explosions were heard in the border area. The Red Alert warning system was sounded at one point, but no incoming missile was detected.

An Egyptian delegation was again in Gaza, seeking to calm tensions in advance of what is expected to be one of the biggest riots Hamas and Islamic Jihad have ever held at the Gaza border. March 30th marks the first anniversary of Hamas’ “marches of return,” the weekly rioting at the Gaza border, as well as Land Day, another event that generates a great deal of unrest in Gaza and among Arabs in Yehudah and Shomron.

Reports in Arab media Thursday night said that “little progress” had been made in the Egyptian appeals for a calm event, but Gaza sources said that the terror groups had agreed not to “cross any red lines” in return for an Israeli promise not to use live fire against rioters. With that, a spokesperson for the Popular Front terror group told the Arab Al-Medean network that a final decision on how Saturday’s events would be conducted would be made at a meeting Friday night.

Meanwhile, it appeared that the IDF was preparing for the worst. Residents of Gaza border area towns said that there were large numbers of soldiers in the area, and numerous reserve soldiers, including those associated with the Home Front Command, have been called up for duty. Gaza sources said that foreign governments had ordered their citizens to leave Gaza. A rumor that Israel had asked the Egyptian delegation to leave Gaza turned out to be inaccurate, and Egyptian sources said that the delegation would remain in Gaza until Sunday.

The U.S. Embassy in Yerushalayim issued a “Demonstration Alert,” warning Americans to stay away from “Gaza and city centers in the West Bank. Security incidents, including rocket fire, can occur well beyond Gaza and its periphery and at any time, as demonstrated by the March 14 and March 25 rocket attacks in Central Israel,” the message said.

Residents of at least one town on the border were offered the opportunity to relocate for an unspecified time. The Eshkol Regional Council denied that the residents of that town and others had been ordered to relocate, but said that security forces had offered them the opportunity to relocate temporarily because they were very close to areas where firebombs were being thrown. Only two families took the army up on the offer, the Council said.

With that, Yediot Acharonot reported, many families in the region were planning to spend the weekend with friends and relatives further north. Many residents are concerned that the riots will be “unusually fierce.”

Among the objectives Hamas set in its call to Gazans to gather on the border was to deploy enough people to march through the border fence, taking it down and entering Israel.

“Our main concern is to get the children away from the border area,” one parent told the newspaper. “Our Fridays over the past year have been very difficult, with lots of noise, explosions, and yelling. We expect things to be very tense this weekend. We just need some air, so we and other families are leaving, and we will return when things calm down.”