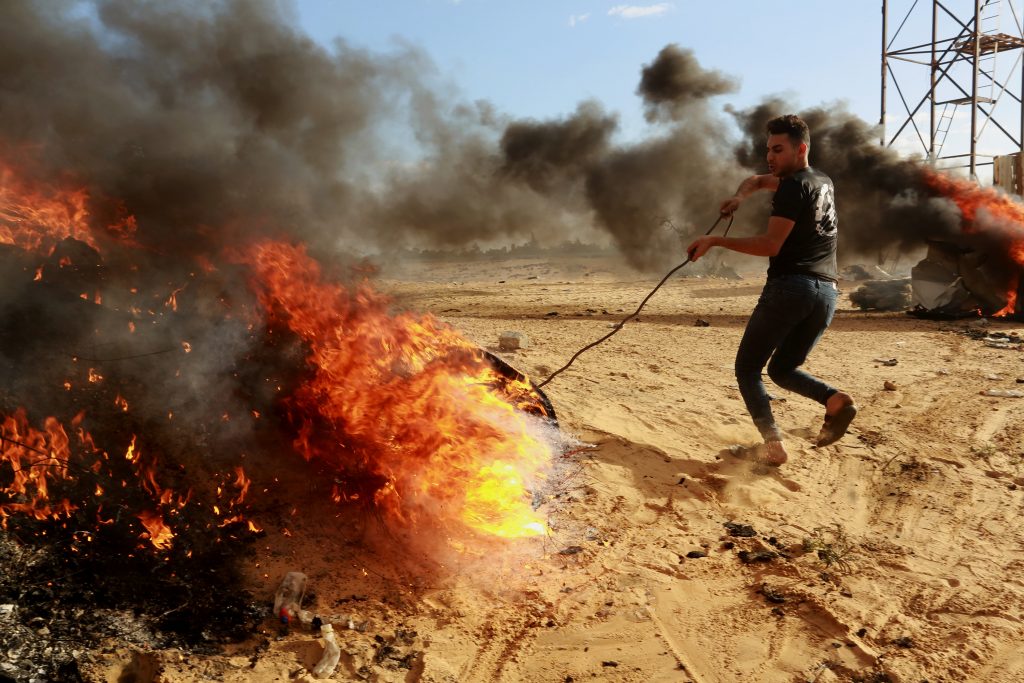 Extensive research into the identities of the Gazans killed during the “March of Return” riots on the border with Israel in the past 42 weeks reveals that 150 of the 187 fatalities were affiliated with Hamas or other Palestinian terrorist organizations.

The Meir Amit Intelligence and Terror Information Center (ITIC) published a meticulous paper on the identities of those killed during the Gaza border riots that showed that some 80 percent of the fatalities were terrorists, and prominent among them were Hamas members with 96 fatalities, about 51 percent.

These findings are consistent with past statements of two Hamas senior figures in the Gaza Strip. Salah Bardawil stated in May 2018 that 50 out of the 63 Shahids killed in an exceptionally violent day earlier that month, about 81 percent, were Hamas members.

Similarly, Yahya Sinwar, chairman of Hamas’ political bureau in the Gaza Strip, said that on May 14, over 60 Hamas operatives were killed.

The ITIC noted that the fact that a large number of fatalities came from terrorist organizations demonstrates that the violence against the IDF near the border is not “popular, as the false Palestinian propaganda wishes to convey.”

“It is orchestrated by Hamas and significantly involves operatives of Hamas’s military wing or operatives affiliated with Hamas,” the ITIC stated.

The findings also prove that the IDF soldiers “do not shoot indiscriminately at ‘innocent’ demonstrators but instead, in most cases, target and hit specific terrorist operatives,” the ITIC underscored.

A breakdown of fatalities according to terror group affiliation shows that 96 affiliated with Hamas were killed, 39 affiliated with Fatah died on the fence, six Islamic Jihad terrorists, two Democratic Front for the Liberation of Palestine (DFLP) terrorists and six Popular Front for the Liberation of Palestine (PFLP) terrorists were killed as well. Another 37 were listed as “unknown,” possibly civilians taking part in the violent activity on the front line near the fence.

In most cases, it is these terror operatives who throw hand grenades and Improvised Explosive Devices (IED) at the IDF forces and it is these operatives who approach the security fence and attempt to sabotage it or penetrate into Israeli territory, the ITIC noted.

In addition, some of the operatives were also involved in attempts to carry out terrorist attacks during the demonstrations and hit the IDF troops deployed on the ground.

On the other hand, the relatively small number of “ordinary civilians” without any organizational affiliation who were killed during the events of the March of Return is conspicuous, with some 10,000 Palestinians taking part in the violence on a weekly basis.

One example that the ITIC pointed out was that of Ahmed Hassan Abu Odeh, 62 from the Al-Bureij refugee camp. He was killed in of December 7, 2018 during the riots in the Al-Bureij area.

A short investigation of his past reveals that he was a Hamas military wing operative. The Muslim Brotherhood movement, Hamas, and its military wing published a poster announcing his death. Ismail Haniya, head of Hamas’ political bureau, arrived for a condolence call at the mourners’ tent.

Likewise, Yahya Badr Mohammad al-Hasanat, 37 of Al-Magharaqa, south of Gaza City was a Fatah member. He died on October 28, 2018, after being wounded in a riot on October 26.

A Fatah network called Kataeb Fursan al-Fatah, the Fatah Knight Brigades, published a notice stating that Al-Hasanat had served as a field commander in the organization.