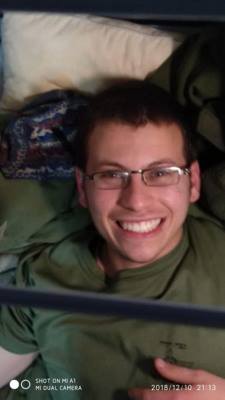 A special gathering for tefillos for Netanel Felber, a soldier critically wounded in the Givat Assaf terror attack, was called for the Kosel on Sunday evening.

The Hadassah Medical Center in Yerushalayim said earlier in the day that Felber, who underwent emergency neurosurgery after the attack, was still in danger, but that his condition has improved slightly.

“Netanel is now breathing on his own. He is still in the ICU and he is on the breathing machine on and off to give him a rest,” Dov Lipman posted on Sunday.

The doctors have cautioned that his condition will likely fluctuate, but the family was reportedly encouraged by the improvement, and said “it still feels miraculous.”

Felber made aliyah with his parents and siblings from Silver Spring, Maryland in 2006.